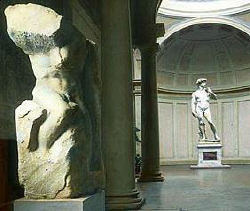 I’ve met several people who walk into the Piazza della Signoria in Florence, look over at the statues flanking the entrance to the Palazzo Vecchio and think, “Oh, wow, there’s Michelangelo’s David! Right out there in the open! How cool – and I didn’t even have to pay an admission fee.” My goal here is to keep you from being one of those people.

See, while there’s a statue outside the Palazzo Vecchio that looks like Michelangelo’s “David,” it’s actually a copy. The copy stands in the exact spot where the original once stood, so you can get an impression of what it might have looked like in its “natural environment,” as it were. You can start to appreciate what the rulers of Florence were trying to convey to their would-be enemies by putting an image of David outside their offices. But to see the original, you’ve got to look elsewhere – you’ve got to stand in line and pay an admission to get into the Accademia.

The gallery’s full name is the Accademia dell’Arte del Disegno, and while the school itself has been around since the 1500s, the gallery which houses Michelangelo’s sculpture masterpiece was built specifically for the majestic work. The “David” has lived here since the late 1800s, along with a handful of other (all unfinished) sculptures by Michelangelo and some paintings… But really, the primary reason to wait in line and buy a ticket to get into the Accademia is to see “David.”

While the “David” copy in the Piazza delle Signoria gives you a bit of historical context for its original home – not to mention a chance to get a picture of yourself at his feet – it’s impossible for the sculpture to compete with the height of the sky, so the copy never seems as grand as the original, which has a roof over its head. Standing at the feet of the “David” in the Accademia is an amazing experience, and if you’re lucky you’ll be able to overhear the conversations of other onlookers who are in the medical profession – they always comment on how anatomically realistic “David” is.

On your way in (or out), the unfinished Michelangelo statues are interesting to peek at because you can see the chisel marks the artist made as he attempted to free the sculptures from their marble casings. One piece in the collection, a “Pieta,” is now thought by some to not really be by Michelangelo.

Unlike the Uffizi, the Accademia doesn’t usually have five-hour long waits to get inside. Partly because so many people think they’ve seen the “David” outside the Palazzo Vecchio, and partly because the gallery doesn’t take long to visit, it’s a quick trip once you get inside. If you’re visiting in the height of the summer tourist season, however, and you’re really pressed for time, it’s not a bad idea to book your tickets in advance.

If you can’t let go of your spontaneous ways, you can scope the line out and see how fast it’s moving. You can also get up early and get in line, although if your time is limited I’d recommend spending an early morning in line at the Uffizi Gallery and then taking your changes at the Accademia after you’re done in the Uffizi.

More Information: The art academy’s official website (Italian only at the moment) is here, information about the museum is here (in English) and you can buy tickets in advance to the gallery by visiting this website or calling 055-294-883 (+39 Italy country code outside Italy). There’s an additional booking charge of €3.00.

Check out more things to do in Florence, too!