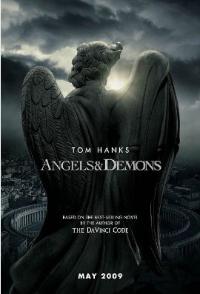 After all the hubbub the publication of “The Da Vinci Code” – and the subsequent release of the movie – created with the Catholic church, it shouldn’t be surprising to anyone that the most recent Dan Brown novel to be made into a movie is also poised to cause the same kind of uproar. What the “Angels & Demons” film has that “The Da Vinci Code” didn’t, however, was an official early snub from the Vatican which occurred during filming. “Angels and Demons,” a prequel to “The Da Vinci Code,” takes place in Rome and centers entirely around Vatican City and the Catholic church – and it’s not terribly flattering to the church, either – so the film crew was denied the rights to film in basically every Roman setting from the book that the church had any control over.

Too much controversy, you say? Heck, no. In fact, it’s this kind of controversy that, at least in part, makes things like these Angels and Demons tours in Rome so incredibly popular. So I decided I’d take a look at a few of the top Angels & Demons tours, comparing itineraries and cost, so you can pick the one that works best for you. I’ve listed them roughly in terms of which ones sound best to me, but I’d still suggest that you read through them all before you pick your favorite.

>> To enjoy the sights of Rome as included in the book but at your own pace, check out this self-guided “Angels & Demons” tour of Rome.

>> Want something a little more special in your tour? Don’t miss this secret Vatican tour of the excavated underground tombs!

>> And if you’re curious, this is only one of the many films that have been shot in Italy! 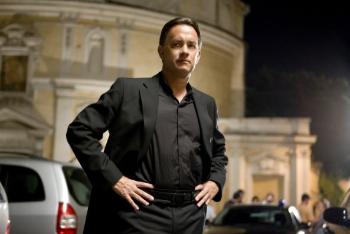 This 4-hour tour covers the main points of interest as laid out in the book, and each group is led by a guide who’s knowledgeable about both Rome and the finer points of the story. Some past tour-goers report that their guide even read certain passages from the book as they visited each site, so you can refresh your memory about why each spot is significant.

The Unofficial Angels and Demons Tour 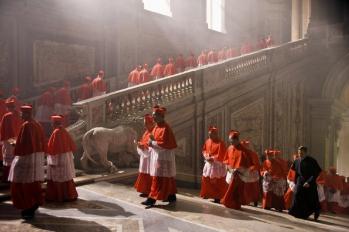 If there’s an “official” tour (see below), there’s got to be an “unofficial” one, right? One would assume that if there really is only one “official” tour then all the rest would be “unofficial,” but I digress. This tour, operated by 3 Millennia, tracks the plot of the novel like many of the other tours on this list, but this one specifically says they’ll “separate fact from fiction” (which is good, since there’s plenty of fiction going on in the book). While you’re enjoying the sights mentioned in the book, you’ll also get to see many of the best Bernini artwork in Rome. 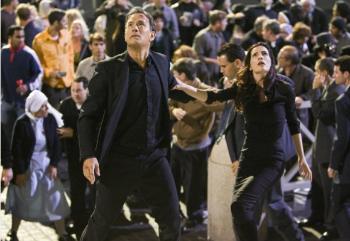 This private tour was inspired by “Angels & Demons” (and also a bit by “The Da Vinci Code”), but rather than just leading you through Rome and pointing out the locations from the novel, it’s an exploration of some of the more historical and philosophical issues raised by the books. It’s a longer (and more expensive) tour than many of the others on this list, but if you’re intrigued by the novel and want someone to discuss the over-arching themes in a more thorough manner this might be the tour for you. This tour is run by the Through Eternity Cultural Association, which has been helping travelers dig deeper into the history and culture of Rome since 1995.

Cost: €410 for up to 5 people (which is €82/person if you have 5 people in your group)
Included in the Cost: English-speaking tour guide. Entrance fees and lunch are NOT included in the cost of this tour.
Duration: 7 hours, plus break for lunch
Start Time: It’s a private tour, so it’s up to you
Group Tour: N/A
Private Tour: Available throughout the week
Sites Visited: Piazza del Popolo, Santa Maria del Popolo and the Chigi Chapel, The Spanish Steps, The Palace of the Knights of Malta, The Palace of the Propaganda of the Faith, Piazza Barberini, Santa Maria della Vittoria, Sant’Andrea delle Fratte, The Trevi Fountain, The House of Bernini, The Pantheon, Church of Sant’Ignazio, The Collegio Romano (seat of the Inquisition), Piazza Navona, Castel Sant’Angelo, The Vatican City (Saint Peter’s Piazza)
Website: https://www.througheternity.com/ptour12.htm 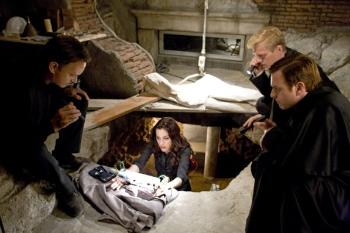 This tour company has three separate Angels and Demons private tours available – two of them focus on different aspects of the book, and the third combines all the sites from the other two into one giant tour. These tours are some of the longer ones available, and they’re also on the expensive side, but they seem incredibly comprehensive and include stops which weren’t in the book (you can consider those bonus attractions you might not otherwise see in Rome). Perhaps the most fun thing about these tours, however, is that if you’ve got a small enough group, you can transported around the city via golf cart. 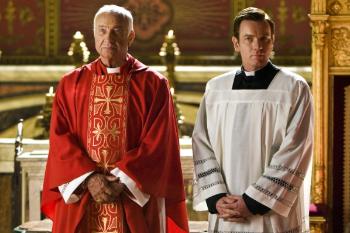 Honestly, I’m not sure what makes this tour the “official” one, other than that’s what the tour operators call themselves. Some of the links (like the one that has press information) don’t work, but the website says that this tour, which existed prior to the filming began, was the only Angels & Demons tour that was invited to be part of the filming chaos. Still, it covers basically the same sights as most of the other tours with no apparent extra bonus sights only available to them because they’re “official.” Maybe you’ll get inside dirt on Tom Hanks? 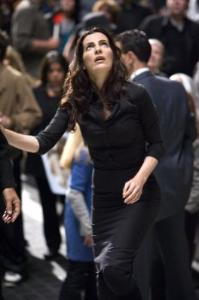 There are six Angels & Demons-themed private tours offered by this company, four of which are named for the elements earth, air, fire, and water. Frankly, the website is confusing, and all six tours include many of the same sights. The idea seems to be that each one has a slightly different emphasis, but the cost for one seems prohibitively high enough that I can’t imagine anyone taking all six tours just to get the full picture (and I can’t find one that includes all of the places covered by the various tours in one itinerary).

Cost: €113 for 1st person, €62 for 2nd person, €45 for 3rd person, etc. (all tours are private)
Included in the Cost: No entrance fees are included in the cost
Duration: 3 hours (extra hours can be purchased at €33/hour)
Start Time: It’s a private tour, so it’s up to you
Group Tour: N/A
Private Tour: Available throughout the week
Sites Visited: Varies depending on the tour chosen
Website: https://www.tourome.com/angels_demons_tours.htm

General Notes on Angels and Demons Tours in Rome 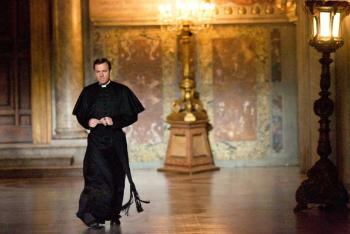 Da Vinci Code tours in Paris were popular after the release of the best-selling book, but they became even more popular after the release of that film. So, while “Angels & Demons” has been out longer than “The Da Vinci Code,” and while there have been some Angels & Demons tours in Rome going on since Dan Brown became such a sensation, these tours are sure to pick up even more in popularity once the film is released on May 15, 2009. So if you’ll be in Rome and you want to take one of these tours, book your spot early.

Now, I feel like I need to say something here, despite knowing that all y’all who read WhyGo Italy are nice and conscientious travelers who “take only pictures and leave only footprints.” When “The Da Vinci Code” became popular enough that people started flocking to Paris (and the other locations in the book) in droves, some of them were foolish enough to take that book as some kind of work of non-fiction. Some brought small hammers or chisels into the churches mentioned in the book in order to dig under centuries-old stones looking for the things they sought in the novel. Some churches were forced to put signs up at their doors reminding people that “The Da Vinci Code” was a work of fiction, that nothing was to be found underneath those stones, and please – fortheloveofgod – don’t hammer on our floors.

In other words, let this be a reminder to you that “Angels and Demons” is a work of fiction. Read the book or see the movie and be entertained, but do not, under any circumstances, believe the tale to be true. And by all means, do not bring hammers or chisels into Roman churches or monuments attempting to unlock the same clues they’re looking for in the story.

all images except the top one are movie stills