I originally wrote this as a journal entry, and in the end decided to share it with you. I hope you enjoy it. 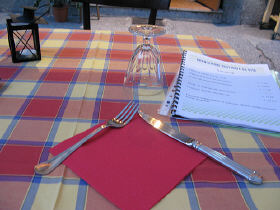 For some reason, when I travel I like to get it in my head that visiting the same (fill in the blank) twice in one visit makes me a regular. It could be a news stand, cafe, restaurant, clothing shop – whatever. If I go more than once I feel like there’s the possibility I’ll be recognized by the people working there from my previous visit, thereby making me a regular. It’s a silly notion, but I cling to it and it makes me happy. Usually it’s nothing more than an illusion, of course.

On this last trip to Venice, however, I think I became something more akin to a regular than I’ve ever managed to do on any other trips here or anywhere else. I went to the same restaurant two nights in a row, and because I was dining alone on both occasions I ended up chatting amiably both with the fellow running the tiny dining room (along with others who worked there) and some of the other diners. I’d introduced myself on the first night with my business card, and said I was a travel writer (long after I’d already ordered and eaten most of my meal, I should mention), and in so doing found my table crowded with tiny plates of samples of dishes I hadn’t ordered. They called me Signorina Jessica all night long, and it was delightful. Was it anything more than them just being stereotypically flirty Italian men? Maybe not. And when you’re traveling alone there are times when you just don’t care about the “why,” as long as someone is keeping you company.

The second night I went back and they recognized me, which instantly made me smile. I let Stefano, the maitre-d’ of sorts, order for me and didn’t even end up reading much of the book I’d brought with me, because not long after I finished my first course, a pair of gentlemen arrived who were friends of the owners (they shouted “Il Sindaco!” – the mayor – when the two walked in, but I don’t know which one they were referring to and it was a joke anyway) and were seated beside me. As he seated them, Stefano introduced them to me and told them in Italian to behave themselves (he then leaned in to me and said, in English, “But we can talk about them, because I don’t think they speak English.”). I chatted with them most of the evening, entirely in Italian, and had a wonderful time. Claudio, Giorgio and I talked about politics (both here in Italy and back in the US), music, travel and, most of all, Italy.

I had arrived on the second night later than on the first, and because things in Venice close up earlier than in most other touristy cities, I was there at 10:30 or 11 when the restaurant staff sat down in the other dining room to eat their dinner. I was there when they pulled down the metal gates outside the windows, and then – because Claudio and Giorgio had given me some of their wine (on top of the wine I’d ordered for myself) as well as a small glass (though not small enough!) of Scotch, and because Stefano had poured me a taste of Sambuca – Stefano offered to walk me back to my hotel so that I wouldn’t fall into a canal.

The fog, which had finally broken a bit in the late afternoon to let a few rays of sunlight dance on the water, had rushed back in with the night and was clinging to everything and everyone. Stefano, a native Venetian, took me a different way back to my hotel by way of St. Mark’s Square – and the fog was so thick that standing in front of the Basilica di San Marco it was impossible to see either the church’s incredible onion domes or the top of the adjacent bell tower. The piazza and the streets were all but empty, and the city was – if this is even possible – even more hauntingly beautiful than it usually is. I think I fell in love with Venice a little more at that very moment, something I also didn’t think was possible.

I couldn’t linger, though, because I was exhausted and absolutely freezing, so Stefano walked me to my hotel’s door and gave me a kiss on each cheek. I promised him I’d come back to the restaurant the next time I was in Venice, but there’s just no telling when that’ll be. Honestly, I’m not sure it even matters, though, because now I’m a regular.