Bergamo: A Great Day-Trip from Milan 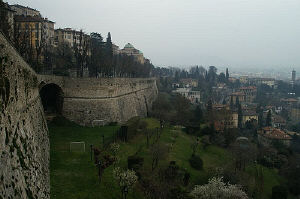 The small city of Bergamo is an easy day-trip from Milan, especially because the part of Bergamo that you’ll want to visit is even smaller. The city is divided into two parts – the old high city, or “alta città,” and the newer low city, or “bassa città.” The newer parts of the city aren’t horrible by any stretch, but the historic and more pretty areas are in the alta città. Thankfully, the city makes it very easy to head straight up to the alta città from the second you leave the Bergamo train station.

From Milan to Bergamo is roughly one hour one way, and trains leave relatively frequently. There is a break in the morning schedule, however, so that if I hadn’t left Milan when I did just before 9am the next trains would have been at 09:48 and then not until 11:22. It’s a slower regional train that runs between the two cities, so no reservations are required. If you’ve got a Eurail or Italy Rail Pass, all you need to do is hop on board. Also, most of the trains for Bergamo seem to leave not from the main station in Milan, Milano Centrale, but from one of two smaller stations in the city – Milano Lambrate or Milano Greco Pirelli. No matter where you’re staying in Milan, you can get to either station easily by bus or tram.

Want to stay a bit longer in Bergamo?

The Bergamo train station spits you out at one end of a very long and mostly straight street that more or less heads directly up to the alta città. If it’s a nice day and you’re trying to work off all that gelato and pasta you’ve been eating, you can certainly hoof it up the hill. But for those of you who are (like me) more inclined to let something with a motor help you out, there are two options. The #1A bus stops right in front of the train station and then deposits you just at the start of the alta città on the other end, or there’s a funicular which runs up the side of the hill. Both cost €1 to ride (the ticket is good for 75 minutes of public transportation, in case you’re planning to make a very quick stop), and you can buy tickets from a machine that’s on the outside wall of the train station (instructions in English and Italian). Remember to validate your ticket once you board the bus in one of the machines either near the driver or near the back of the bus.

Oh, and don’t forget to check the return train schedule before leaving the train station, so you can time your trip back down from the alta città. Should you forget to do this and have a little time to kill, however, there’s a great gelato shop called Grom (it’s a chain, with stores in several Italian cities) a few blocks from the train station up that long, straight road that runs between the station and the alta città. Even on a cold day, it’s a good place to visit – the “cioccolata calda” (hot chocolate) is a decadent treat.

I visited Bergamo on a Saturday, and the tourist information office located across the parking lot from the train station is oddly only open during weekdays. I figured I was stuck without a map or guide, but Bergamo’s alta città isn’t too big, so it didn’t seem like a huge loss. Once I got up to the alta città, however, I found there’s a second TI up there that’s open on weekends. They have great little free maps of the high city as well as a free pocket guide to the attractions (available in several languages).

The main thing to do in the Bergamo alta città is just wander, so do yourself a favor and try to get lost. It’s virtually impossible to do, because the old city is encircled by the old city walls – so if you stray too far in any one direction you’ll just bump into a wall at some point and have to turn back. The streets themselves aren’t often flat, but if you’re letting the bus or funicular get you up and down the hill then a few little climbs on the streets of the alta città shouldn’t be too much trouble.

A few of the things to see in Bergamo are:

If you’re spending a day in Bergamo, chances are good you’ll have a meal during your visit. There are a few Bergamesco specialties you may want to consider ordering, if for no other reason than to sample a unique cuisine. Here are some of the items you’ll see on Bergamo menus, and possibly nowhere else.

For some more Bergamo food pictures, see this Ms. Adventures in Italy post about Bergamo – she has a fondness for the pastries, and who wouldn’t when they’re so pretty? It looks like she took pictures of the same shop window selling Polenta e Ösei that I did, only the window was more populated when she was there. Maybe during my visit all the birds had flown south for the winter.

You can check out more of my Bergamo photos, too. 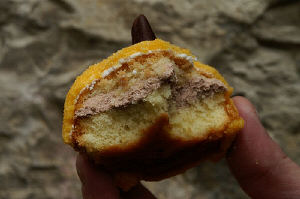 Now go get your own!