By now you may have heard the news that one of the buildings at the Pompeii excavations collapsed on Sunday morning. Initial reports said it was the House of Gladiators, but it appears the building was better known by its Latin name – Schola Armaturarum Juventis Pompeiani.
It was one of the structures at Pompeii that still had a roof on it, and although it was quite a distance from the main entrance it was on Ancient Pompeii’s main street, the Via dell’Abbondanza. The Schola Armaturarum was not far from the amphitheatre. Because the collapse occurred early on Sunday, 7 November 2010, long before the site was open to visitors, there were no injuries as a result.
Here’s a map showing the Pompeii excavations, with the locations of the Schola Armaturarum building and the main entrance marked: 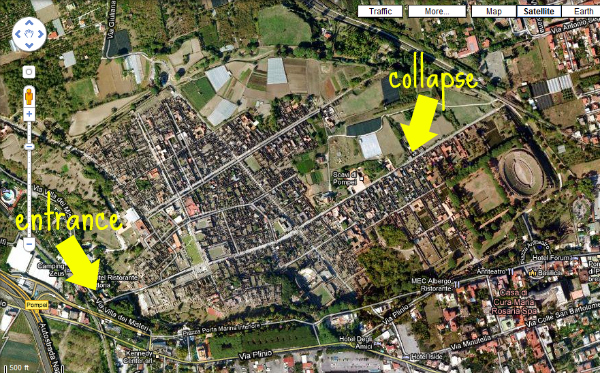 And here’s a close-up using Google Street View (which had mapped the Via dell’Abbondanza) of the building before it collapsed and its location in relation to the amphitheatre: 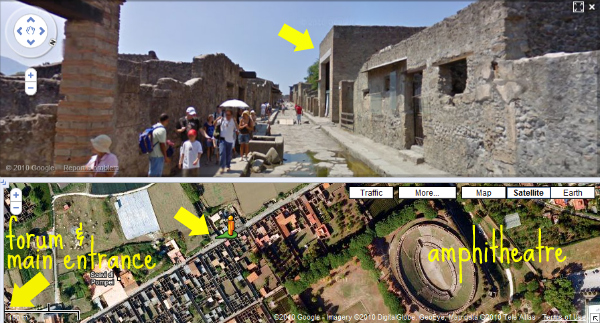 The Schola Armaturarum, damaged in World War II, had been partially rebuilt – including some of the walls and the roof – and although it’s not even one of the buildings marked on the official Pompeii map, the interior did contain some frescoed walls. Italy’s culture minister says some of the “frescoes on the lower walls may have been preserved,” but judging from the piles of rubble in photographs from earlier today, it may be some time before we really know what’s been lost.
The collapse already has some pointing fingers of blame and calling for things like the privitization of the Pompeii excavations (they’re currently managed by the Italian government).
For more information about the Pompeii collapse, check out these news stories (some in Italian) and photo galleries:

I recently learned about the blog Blogging Pompeii (and their Twitter profile), which is – as the tagline states – “a blog for all those who work on Pompeii,” which is another resource for information about the collapse and about Pompeii in general.
>> Learn more about visiting Pompeii