Day Trip from Milan: Visit Vigevano for Pizza in the Piazza

This article was written and submitted for publication on the Italy Logue by Chris Bright. 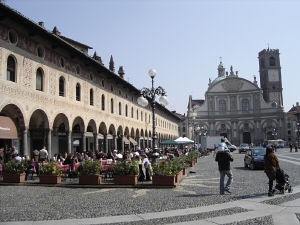 If you need to take a break from the fast-paced lifestyle of Milan, the charming little town of Vigevano is just far enough off the beaten path to provide a refreshing respite from crowds and tourists. Located a quick 30-minute train ride that takes you 25 km southwest from Milan’s Porta Genova station, Vigevano makes a perfect lunch-time destination where you can escape for a few hours.

On second thought, I take that back. You will see tourists on the weekends – but they are almost all Italians who drop in from the surrounding region for a visit. This fact was confirmed when, after visiting Vigevano (pronounced vee-JAY-vuh-noh) for the first time, I mentioned in passing to a shop owner in Milan where I had spent the afternoon. A huge smile spread across his face and he enthusiastically exclaimed that Vigevano’s Piazza Ducale is the “most beautiful piazza in the whole world!” After hearing a Milanese say it, this statement instantly moved from the realm of opinion – an opinion I shared after my springtime afternoon visit to Vigevano – to irrefutable fact.

Vigevano’s main attraction is its small town charm with a pedestrian-friendly historic center. There are several notable sites, but nothing that demands a visit, so put the checklist away and just stroll along the streets, do some window shopping, walk through any sites that catch your eye and, most importantly, enjoy a delightful lunch. The Piazza Ducale is the place to start and is easily reached on foot from the train station in less than 10 minutes.

As you exit the station, find the street called Via Cairoli which is opposite the entrance on the other side of the small piazza. Follow Via Cairoli’s narrow sidewalks for about five minutes as they gently

bend to the right. When you arrive at a portico on the right, go through it onto Via Settembre XX and after a hundred meters it will deliver you into the Piazza Ducale.

The Piazza Ducale was built in the period of 1492-93 for Ludovico Sforza and, according to the information sign, is “considered the model Renaissance piazza” and “a gem of 15th century Lombard design.” The noted conductor Arturo Toscanini once said of the Piazza Ducale that it is “a symphony with four walls.” The grand piazza is ringed by an uninterrupted arcade with intricate frescoes painted on the façade. The remarkable attention to detail is even carried through to the paving stones that ring each lamppost with a design in the shape of the sun. 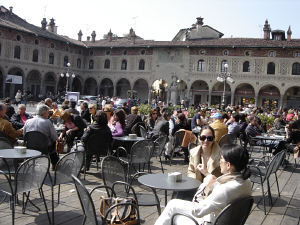 Start with a stroll around the perimeter to take in the window displays and to peruse menus for a place for lunch. If the weather is comfortable, find a table in the piazza and prepare to enjoy a leisurely meal admiring the detailed façades, the cathedral and the tower of the Sforza Castle. You may spend a little more for the privilege, but dining at a table in the piazza is well worth the additional cost. Just remember to wear some sunscreen if your table is not in the shade.

The East end of the Piazza Ducale is dominated by the Baroque façade that was built in the 17th century to spruce up front of the Cathedral, which was completed in 1608. The church houses several notable artworks, including pieces by Macrino d’Alba, Bernardino Ferrari and others, as well as a tempera polyptych of the school of Leonardo da Vinci.

After exploring the piazza, head back to the portico that you passed through on the way from the station. Once under the arch, take a left (coming from the piazza) and walk through the space that was called the strada sotterraneo, or underground street. On the other end of the long corridor, head up the stairs and outside, and then loop back around into the unique strada coperta, or covered street, that was built in 1347 and was able to accommodate galloping horsemen in order to communicate rapidly between the fortifications and the castle proper. 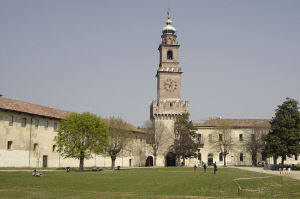 After walking up the 164 meter length of the strada coperta, you will enter the main grounds of the Sforzesco Castle which once hosted Leonardo da Vinci. The courtyard is dominated by the Bramante Tower which stands at 60 meters tall and looks like the little brother of the Castello in the heart of Milan, which was also designed by Bramante. The tower was originally started in 1198 when the stronghold was built by the Visconti family and was completed in 1494 under the direction of Ludovico Sforza. After admiring the tower, follow the stairs at its base and they will take you right back to the Piazza Ducale.

For an unusual diversion, check out the Museo della Calzatura which is an exhibition of shoes and shoemaking that is housed on the castle grounds. You can see more than 300 unique and historic pairs of shoes that demonstrate how they have been used as part of fashion through the centuries, as well as a demonstration of the techniques of how they are constructed.

If you still have some time, wander around the charming streets that ring the piazza. The area is a pedestrian zone and the shops are for locals, so could be more affordable than those found the short distance away in Milan.

How to Get to Vigevano:
The train ride from Milan costs €2.70 each way and takes approximately 30 minutes. The train line passes through table flat farmland where all of the fine ingredients are grown that feed Milan and its neighboring towns. You can reach Porta Genova station by taking the Metropolitana Line 2 (green line) directly to the station. Tickets can be purchased at two places in the station, either the biglietteria or in the newsstand right next to it. The latter is usually a better option since the tickets are pre-printed and there is usually not a line.

More Information about Vigevano:
The Vigevano tourist website (https://www.itineranet.it/vigevano/) is incredibly helpful, and includes a video introduction to the city (in English as well as Italian) and downloadable PDFs which serve as self-guided tours of the city. So even if the TI is closed, if you’ve printed out the PDFs you’re in great shape. You can also download the video introduction to be played on your computer or your iPod.

Tourist Information Points:
Palazzo Comunale, Corso Vittorio Emanuele II, 25. You can find from the Piazza Ducale by facing the Cathedral and turning left down the street leading out of piazza. The office will be one block in this direction. Tel. +39 0381.299291
Hours: Monday-Friday 08:30-13:30, Monday-Thursday 15:00-17:30