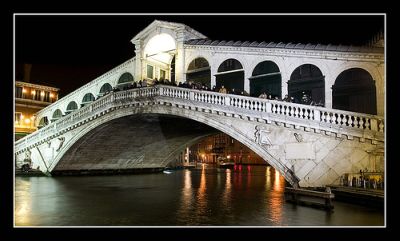 Whatever noble reasons you think you have for traveling, at some level travel is about checking things off a to-do list. It might be countries you want to visit, or activities you want to do, or pieces of artwork you want to see. So when travelers see an article listing (for instance) famous bridges around the world that you can climb on or walk across, they start getting out their pencils and checking off the ones they’ve already done. (And if you don’t believe me, scroll down to see the comments on that article!)
This particular article includes two bridges in Italy – the Rialto in Venice and the Ponte Vecchio in Florence. Now, a Venetian might quibble with the author that only one of Venice’s 430+ bridges made the list, but I love the canal city and can only think of a couple more bridges that are famous enough to be added to the list (most notably the Bridge of Sighs, although you do have to pay for a ticket to see the Doge’s Palace in order to walk across it).
Aside from the Rialto in Venice, however, a couple of the other bridges that cross the Grand Canal are semi-famous. The wooden Accademia Bridge (Ponte dell’Accademia) only dates from the the 1980s – it replaced a wooden bridge constructed in the 1930s. The 1930s bridge was intended to be a temporary one until a more permanent stone bridge was built, but the wooden bridge remained. The new 1980s bridge is an exact replica of the 1930s bridge.
Venice’s newest bridge is also semi-famous, mainly because of the controversy around its construction. The Constitution Bridge (Ponte della Costituzione) spans the Grand Canal from the Piazzale Roma (the city’s parking lot/bus stop) and the main train station, which seems like a good thing – but the modern design rubbed many the wrong way.
The city with the other famous bridge featured in the article, Florence, also has numerous bridges crossing the river – the Ponte Vecchio is undoubtedly the most famous (and the most crowded), but one of the best ways to get a great picture of the pretty Ponte Vecchio is by going to one of the bridges on either side of it! In fact, although it’s worth a stop on any Florence itinerary, the Ponte Vecchio isn’t the most efficient way to cross the Arno River. If you’re just looking to get from one side of the river to the other quickly, I’d suggest taking one of the other bridges.
Are there other famous bridges in Italy that should be added to this list? Let me know in the comments – I might have to put together my own list of famous bridges in Italy you can walk across!
And if you’d like to keep going after you check the Rialto and Ponte Vecchio off your list, there are lots of other bridges in Europe included that you could get to next. From Venice’s Marco Polo Airport, you can take advantage of easyJet flight deals to London or Paris to walk over the Tower Bridge or the Pont des Arts. And just outside Venice is the Treviso Airport, which has Ryanair deals to London and Paris as well.
photo by lpiepiora