How to Read an Italian Soccer Schedule

Since the Lega Calcio folks just published the schedule for the 2011-2012 Italian soccer season, I thought I’d bring this post back up to the top so people who are traveling in Italy this year have an idea of how to find out whether there are games going on while they’re visiting. 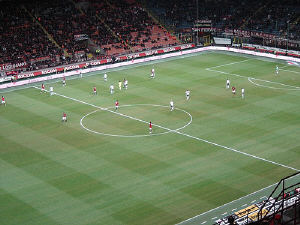 I might be in the minority here, but when I first started looking at the Italian Serie A soccer schedules I found them really hard to figure out. In fact, I’ll admit that I still sometimes find them kind of unnecessarily confusing. So since I have to assume I’m not the only one who thinks the whole thing’s a head-scratcher, since I’ve gotten questions from some of you about seeing soccer games during your Italian vacations, and since the first games of the 2008-2009 season are fast approaching, here’s a little primer about how to read Italian soccer schedules.
First of all, all the teams in the Serie A league (that’s the top league in the country) play each other twice during a season. Not only that, the order that teams play one another in is the same in the second half of the season as it is in the first half. In other words, a team will work its way through the list of other teams and then, when it’s gotten through the list, it’ll start over at the beginning and work through the list again in the same order. Sounds organized and clever, right?
Well, because it’s all so organized, what the Serie A folks have done is this – instead of listing the entire season’s games out chronologically, they create a chart with each pairing listed only once. It looks sleek, and the clever design is very Italian. But in my opinion, it’s too clever by half. Here’s what I mean: 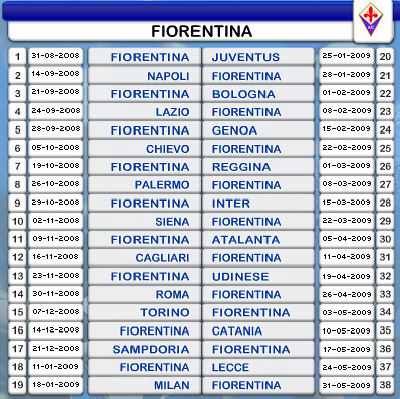 You’ll see here on this 2008-2009 Fiorentina schedule that their season begins with a game against Juventus, followed by a game against Napoli. The last team on their pairing schedule is Milan, after which they start at the top and play Juventus again, then Napoli, and so on. On each side of the team names you’ll see dates and numbers. The numbers refer to which game it is in the 38-game season, and they just go up by one for each game. The dates refer to when each pair of teams listed plays (remember, Italian dates are written day/month/year!). So far so good – but how do you know which games are actually in Florence and which are away games?
This is where my brain starts going in circles & I second-guess myself into a state of confusion. So here’s the first bit of important information:
The team listed in the left column is the home team for the first half of the season.
What this means is that for Fiorentina’s first game of the season against Juventus on August 31, 2008, they’re playing in Florence on their home field. That’s easy enough to get your head around, but the whole thing flips when you’re talking about the second half of the season. In other words, for the second meeting of Fiorentina and Juventus on January 25, 2009, Fiorentina (listed in the left column this time) is playing on Juve’s home turf in Turin.
What it boils down to is this: whatever team name is physically next to the box with the date in it is the “home” team for that date.
Yes, it’s clever. It’s extremely clever. The schedule looks fantastic. There’s no wasted energy re-writing the same pairing up twice every season. The whole thing is as sleek as a Ferrari. And perhaps I’m the only one whose brain got tied in knots trying to figure it out. But something tells me I’m not the only one – so I hope this little lesson helped.
Class dismissed.
You can find out your favorite team’s current schedule on the official Serie A Calendar page, clicking on the big “Serie A” button and then clicking on the symbol of your team on the top.
And I want to send a big GRAZIE MILLE to Valentina, who has been trying to set me straight on reading these schedules!