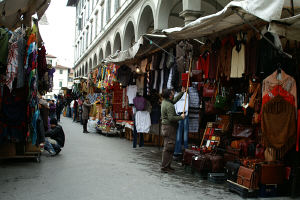 You know that devilish trick that Cinnabon has in American malls of pumping its sickly sweet scent into the corridor outside the shop, so that anyone within a 100-foot radius is compelled to follow the smell to the source and then, before you know it, you’ve got a giant Cinnabon in your clutches and halfway down your gullet? You know that feeling? Where a smell is so intoxicating that it makes you do things? That, my friends, is the effect that the Florence leather market has on me. If I found out they’re spraying leather scent at nose-height in the street, I wouldn’t be surprised.

I’ll admit that I have an addiction to shoes and purses, so traveling in Italy is almost always dangerous for me (not to mention my bank account). On my last trip to Italy I had scheduled my visit to Florence near the end of my trip, and prior to arriving in Florence every time I would look twice at a new purse or pair of boots I’d say, “No, no – wait until Florence.” And I did. I waited. And then I got to Florence, and – completely accidentally – my path from the train station to my hostel went straight through the heart of the leather market. I swear, I didn’t mean it to happen, but you can see how I’m so powerless to the leather market that even I don’t realize it. 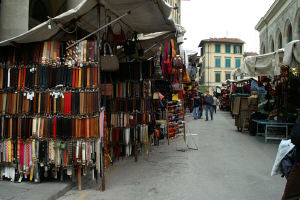 That first trip through the leather market I got through unscathed, without a single purchase. I did, however, see a gorgeous purse of an impossible turquoise color that, when I went back on several occasions to try to find it, had sadly disappeared. And my suitcase was only slightly heavier on my return to Milan than it was when I arrived in Florence – I got one purse for me, one for a friend and a pashmina for me. That’s not to say I didn’t spend countless hours wandering through the leather market, though, or try on a sumptuous lambskin three-quarter-length coat… (Oh, it’s too painful to think about it, since I didn’t come home with it!) At any rate, after browsing, shopping, bargaining and learning to say NO in the leather market in Florence, I thought I’d share a few tips with you so you can go shopping like a pro.

Jessica’s Tips for Shopping in the Florence Leather Market

Remember that in addition to the actual brick-and-mortar leather shops all over Florence, there are two outdoor markets. One runs along most of the Via dell’Ariento between Via Nazionale and the Piazza San Lorenzo. The other is called the Mercato Nuovo and it’s under a loggia between the Ponte Vecchio and Duomo near Via Porta Rossa and Via Calimala. There’s not much difference between the wares, but if you’re really into browsing you should certainly peruse both before you start shopping in earnest.

Here’s a video that includes a look at both the leather market and the indoor Mercato Centrale, where you can buy food: