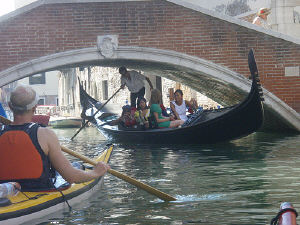 I know I could have put this article in with my usual Sunday news snippets post, but I couldn’t resist giving it its own headline – partly because I love the moxie of the couple in the story, and partly because I wanted to make sure you all saw the article!

New York Times writer David Kocieniewski and his girlfriend recently took a trip to Venice, where instead of forking over the usual umpteen-gazillion euro on a one-hour gondola ride through the city, they brought their own private boat – an inflatable kayak. The inflatable kayak packs into its own suitcase-sized bag, so they simply brought it with them as checked luggage. And although Venice’s laws seem to indicate that only the residents of Venice are allowed to operate a boat through the canals, Kocieniewski decided to chance it anyway – and the locals that Kocieniewski ran into said that only applies to motorized boats. As he puts it, “We encountered more than a dozen police boats and attracted nothing more than a smile and a bemused shake of the head.”

Cities which are located on water have, in my experience, one thing in common – you get a very different perspective on the city when you see it from that water. And apparently Venice is no different. Kocieniewski and his girlfriend were able to navigate through what seemed like “secret” passageways that wouldn’t have been accessible (or, if they were, would have been exceedingly difficult to find) on foot, and getting to peek inside the now flooded lower levels of some of the grand buildings. And while crossing the Grand Canal itself sounds like it was a real-life game of Frogger, the night-time kayaking Kocieniewski did (which, on the surface, sounds like it’d be much more intimidating than daytime kayaking) looked serene and quiet because most of the gondolas were done for the day, and the work boats were gone.

Even if you’re not contemplating kayaking Venice yourself, the article is still an interesting read for anyone planning a visit to the canal city. And be sure to check out the video – it’s just a couple minutes long, and it may just tempt you into packing your own inflatable kayak on your trip to Venice – especially with the cheap flights to Europe you can get at this time of year!

original photo credit for picture at the top: René Seindal