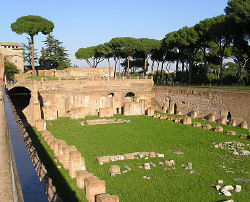 Rome was built on seven hills, and the Palatine Hill is the central hill as well as the site for one of the oldest parts of the city. It is in a cave here that (legend says) Romulus and Remus were suckled by the famous she-wolf – Romulus being the one who founded Rome once he grew up – so this hill is not only extremely well-known but also revered in Roman mythology. The importance of the Palatine Hill is more than just based in myth, however, as excavations here have revealed evidence of people living on the site around 1000 B.C.E.

The Palatine Hill overlooks the Roman Forum on one side and the Circus Maximus on the other. It is easy to combine a visit with the Colosseum and the Forum with a visit to the Palatine Hill. The buildings on the hill once included palaces of Augustus, Tiberius and Domitian, as well as other important Romans of the period, and a temple dedicated to Apollo. This site was also where ancient Romans celebrated the festival of Lupercalia, honoring the saving of Romulus and Remus by the she-wolf.

What exists today on the Palatine Hill may disappoint, as the ruins are pretty minimal, but the views overlooking the Forum and Circus Maximus are nice. And with the recent discovery of what archaeologists believe is the cave in which ancient Romans celebrated Lupercalia, it’s possible that tourists may be making more of an effort to climb up the hill to see this amazing find – although it will be quite awhile before it’s open to the public (if it ever is).

Hours: Daily, 09:00-19:00 (or one hour before sunset)
Admission: €9, covers Colosseum, Palatine Hill, and Palatine Museum within 24 hours
Location: Next to the Roman Forum and the Circus Maximus in central Rome; main entrance is near the Arch of Titus and Colosseum, a second entrance is on Via di San Gregorio
How to Get There: Metro stop: Colosseo
Visitor Tips: The main entrance of the Palatine Hill is where to go to buy tickets to the Colosseum when the line at the Colosseum is long. Audioguides and guided tours (in English, among other languages) for the Palatine Hill are available, just ask at the entrance. Guides may be useful to help you understand the ruins.