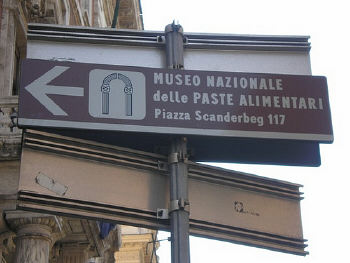 I don’t know about you, but sometimes the usual tourist-trail sights and attractions aren’t enough to satisfy my soul. Sure, when I’m in Rome I want to see the Colosseum, the Pantheon, and the Vatican Museums – who doesn’t? – but after that I need a little something different to make me feel like my trip isn’t a cookie-cutter duplicate of every other vacationer’s. If that sounds like a good idea to you, too, then I welcome you to yet another stop on my tour of Weird & Wonderful Rome – the Pasta Museum.

It makes perfect sense that in a country like Italy, where the food is raised to the level of an art form, there should be an entire museum dedicated to one of the most famous culinary treats associated with Italy (nevermind that pasta itself was imported to Italy from Asia – the Italians have perfected the combination of flour, water, and salt). It probably also makes perfect sense that the National Museum of Pasta Foods is, as the website states, “the only one of its kind in the world.”

The pasta museum spans 11 rooms, and covers subjects you might expect, such as the history, production, and nutritional information of pasta – as well as a few you might not, like the history of pasta as art. The museum was opened in 1992, and the focus is entirely on Italy’s contribution to the world of pasta. In fact, you might not want to bring up the whole “pasta comes from Asia” thing on your tour.

As with any good museum tour, this one ends in the museum’s gift shop. And, in addition to the usual things you can buy in a gift shop, Rome’s pasta museum has something you probably won’t find for sale in many other museums around the world: Pasta.

At the moment, the museum’s website says it’s closed for restoration, and there’s no timeline listed for when it’ll reopen. Unfortunately, the notice for the museum’s closure was made back in August of 2007 – so it’s unlikely that it’ll be welcoming visitors anytime soon. Perhaps a barrage of email requests would encourage them to work more quickly? Then again, I found evidence of someone who’d been to the museum in 2008 – so maybe the website’s just horribly out of date instead! It’s Italy, so you never can tell…

>> Check out my recommendations for more weird sights in Rome you can visit!