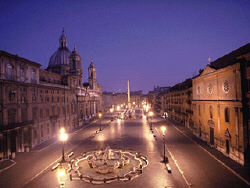 Of all the piazzas in Rome, Piazza Navona is one of the most popular for both tourists and residents. The first thing that you’ll notice when you enter this oblong piazza is its odd shape. Rather than a big angular shape with a big church or government building at one end, the Piazza Navona is long and skinny – and if you look at the “corners,” you’ll notice they’re not corners at all. They’re rounded. What gives?

The odd shape of the piazza will make perfect sense once you realize that this space was once the site of an ancient Roman circus, generally an elongated version of a Roman arena where people would go to watch athletic and theatre events. And although the circus which once occupied Piazza Navona is gone, it has left its clearly-defined outline on the curved buildings which once surrounded it. The piazza is today one of the best places to see Baroque architecture in Rome.

The Piazza Navona was turned into a city market in the 15th century, and though the market was later moved again in the 1800s this piazza is still a common place to find vendors set up selling trinkets to tourists or, in December, Christmas goodies to anyone who’s around. There are also occasional performances which take place here as well. There are several cafes with pretty dining areas facing the piazza, but expect to pay for the privilege of being seen eating on Piazza Navona.

A particularly colorful story in Roman history revolves around the real-life rivalry between Gian Lorenzo Bernini and Francesco Borromini, both talented artists, architects and sculptors of the 17th century, both of whom have major works of art featured in Piazza Navona. The piazza’s main monuments, in fact, are the large Bernini fountain at the center (including the Egyptian obelisk) and the church of Sant’Agnese in Agone, designed by Borromini.

Bernini’s fountain is called Fontana dei Quattro Fiumi, or Fountain of the Four Rivers, and it features statues representing the Nile, the Ganges, the Danube and the Rio de la Plata. One of the statues on Bernini’s fountain squarely faces the front of Borromini’s church, and it is that statue which appears to be recoiling in horror. Popular myth says that this was Bernini’s artistic critique of his rival’s work, but it really is just a myth – the church wasn’t even started until a year after the fountain was completed.