We all know how great a vacation in Rome can be when the city’s at its sunny best – but that’s usually when it’s most expensive, too. Traveling when Rome is potentially cold and rainy may not sound like fun, but today’s guest author is here to tell you there’s plenty to do and see in Rome when the weather’s less than fabulous.
Briana Palma lived in Rome for several months, giving her time to explore the city in all kinds of weather, and she’s here to tell you that bad weather need not stop you from enjoying Rome. As she so correctly points out, all of these indoor spots are not only good for when it’s raining – but also when you need a break from the sun, too.

Romans are notoriously proud of their city for endless reasons ranging from Caesar to soccer. A famous Italian song even declares, “Quanto sei bella Roma quando piove” (Rome, how beautiful you are when it rains). And sure, the lyrics may hold true for those sipping coffee in a downtown café or snuggled up in a warm apartment, but bad weather can put a serious damper on travelers’ plans.
After all, what’s Saint Peter’s Basilica without the setting sun, or the Colosseum dressed in puddles?
Still, if you’re planning to visit the Italian capital during its rainy spring or autumn, have no fear. There are plenty of great sights in Rome that will keep you out of the rain (or the brutal summer sun for that matter).

The Italian capital is known as the Eternal City for a reason. It dates back nearly three millennia and evidence lies both boldly on display and quietly hidden throughout the city. 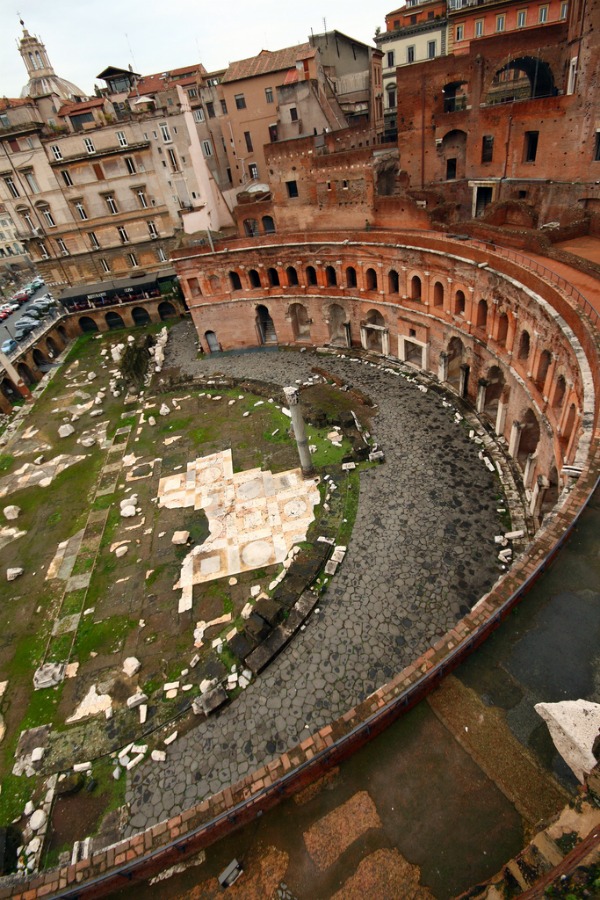 Ara Pacis Museum
This institution, which sits along the banks of the Tiber, perfectly juxtaposes old and new. To the dismay of many locals, the five-year-old museum is the only contemporary construction in the city’s historic center. Nonetheless, the Richard Meier-designed building holds one of the Roman Empire’s greatest treasures, Augustus’ Ara Pacis, or altar of peace. The elaborate marble work shows historic scenes and images of both people and gods.
Trajan’s Markets
Just steps from the Colosseum you can explore the original Romans’ version of an administrative office and part of the great Imperial Forum. Today, the museum at Trajan’s Markets presents a mixture of 2,000-year-old artifacts and modern multimedia displays that explain the area’s evolution. Over the years it has served different purposes, including acting as a military fortress and convent. These days it continues to add to its repertoire by hosting special events like concerts and happy hours.
Pantheon
While rain can ruin a visit to some of Rome’s major landmarks, it adds a little something special to this iconic temple. The colossal dome includes a large, circular opening, so you can watch precipitation cascade onto the colorful marble floor and then disappear through 22 barely noticeable drains. The building presently functions as a Catholic church, so it’s free to the public.

Two-thousand-year-old structures may dominant Rome’s landscape, but recent years have seen the addition of modern works and the celebration of some of the greatest artists and architects of our day.

MAXXI
Less than a year old, this contemporary art museum seems out-of-place in a city known for its history, yet it offers a breath of fresh air, pulling visitors into the present and giving them a break from the dominance of all-things ancient. Designed by Iraqi-born architect Zaha Hadid, the bold structure alone is worth a visit. The space inside also features diverse 21st-century art, including photography, painting, sculpture and installation.
Parco della Musica
Northern Rome welcomed this complex in 2002 and since then it has brought the public everything from classical concerts to science symposiums. Award-winning Italian architect Renzo Piano designed the space, which boasts three concert halls in addition to a bookstore, restaurant and archaeological museum. Parco della Musica’s calendar is usually jam packed with events, but if you miss out on the opportunity to attend a show, sign-up for one of the daily guided tours.
Chiesa di Dio Padre Misericordioso
Rome has about 900 churches, but this one breaks the mold with its dramatic curved exterior emulating the sails of a ship. The Vatican wanted something unconventional when it commissioned Richard Meier, the architect behind the controversial Ara Pacis Museum, to design a church for its Jubilee in 2000. Both a place of worship and a community center, the large, luminous complex sharply contrasts the monochrome buildings that surround it in the Tor Tre Teste suburb.

Each day, thousands of pilgrims visit Vatican City, but it’s not the only holy place in Rome. Rather than wait outside in its inevitably long lines, check out some of the capital’s other fascinating religious institutions. 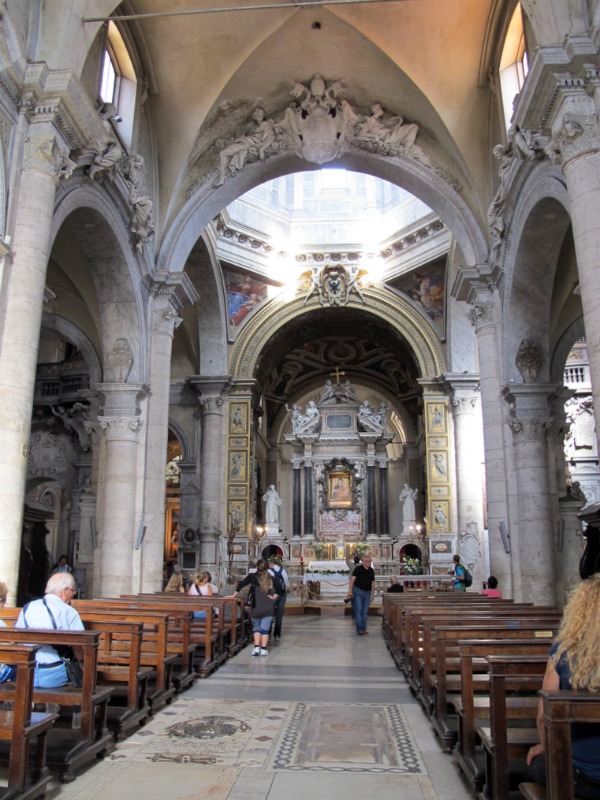 Basilica di Saint Clemente
Like Russian nesting dolls, this unassuming church holds many surprises underneath its first ‘layer.Ó Inside the medieval basilica you can view a stunning mosaic in vibrant shades of red, orange and gold, but the real fun begins underground, where the layers of Roman history are revealed. You can explore the remains of a 4th-century church, which still contains some of its original frescoes. Descend one more story, though, and you’ll find yourself in a 3rd-century pagan temple.
The Great Synagogue and Jewish Museum
Catholic culture has ruled Rome for much of its history, but one neighborhood remains steadfastly Jewish. Although the Ghetto witnessed discrimination and persecution in the past, today it celebrates the beliefs and traditions of the Jewish community. The Great Synagogue features beautiful geometric designs and stained glass windows, while the adjoining museum chronicles the struggles and successes of its people in addition to showcasing art and artifacts.
Chiesa di Santa Maria del Popolo
You may recognize this Renaissance church from novel-turned-film, Angels & Demons, but its wow-factor goes beyond Hollywood. Not only is it found at the edge of one of Rome’s greatest piazzas, but it also contains the work of some of Italy’s most famous artistic masters. Bernini contributed two sculptures and also completed Raphael’s work on the Chigi Chapel. The real attraction, however, is the Cerasi Chapel, which contains two paintings by the legendary Caravaggio.

You can’t visit Italy without indulging your taste buds, and Rome is no exception. Though locals love outdoor dining areas and strolling while snacking, some places let you have your cake and eat it inside, too. 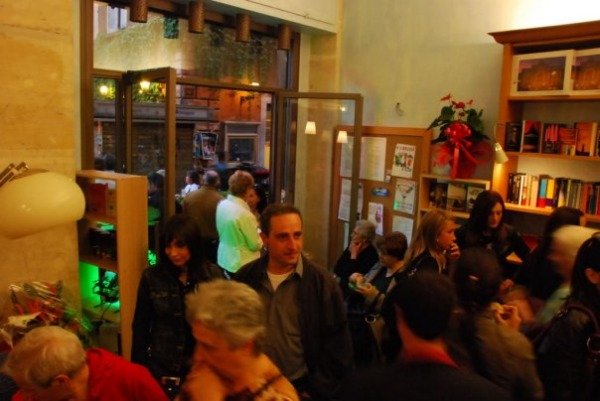 Palazzo del Freddo
You can get a decent scoop of ice cream nearly anywhere in Rome, but locals hail this out-of-the-way gelateria as the best around. The Palazzo del Freddo, known as Fassi, draws crowds to its large shop, located near the Vittorio Emanuele park and subway stop. Choose from about 30 flavors of smooth ice cream as well as other cold treats, all sold for less-than-average prices.
Emporio alla Pace
This book-bar in Rome’s historic center is quickly becoming a favorite among locals and tourists alike. Order a coffee or tea along with some sweat treats and sink into one of the shop’s comfy couches as you take a break from touring. You can also browse the selection of books on sale or log-on to the Internet, as the city’s free Wi-Fi reaches the area. At night, the coffee shop transforms into a casual bar where friends chat over cocktails.
Circus Maximus Farmer’s Market
Campo dei Fiori’s open-air market attracts plenty of activity Monday through Saturday, but caters mostly to tourists. On the weekend, however, you can pass the time wandering the stalls of the newer, indoor Circus Maximus Market, located at the former Jewish fish market. Vendors sell only products from the Lazio region, so pick up something fresh to eat or just enjoy the unlimited opportunities for people watching. 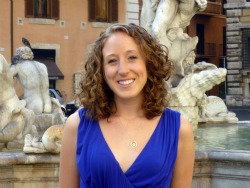 About the Author:
Briana Palma is a Boston-based freelance writer and translator who loves languages and living in foreign cities. She got hooked on the European lifestyle when she studied in Madrid for one year. She then spent five months in Rome, where she learned to eat, cook and speak Italian. You can read more about her work at www.brianapalma.com.
photos, top to bottom, by: Hello, I am Bruce, press department of Parco della Musica, ho visto nina volare, Emporio alla Pace Facebook page