If you’re looking for things to do in Rome, don’t miss the Roman Colosseum – you’ll find some history, visitor’s tips and how to avoid the long ticket lines right here.

>> And if you’re looking for a place to stay near the famous monument, check out these budget hotels near the Colosseum, and these hostels not far from the Colosseum.

Getting Into the Roman Colosseum & Getting Around the Long Lines 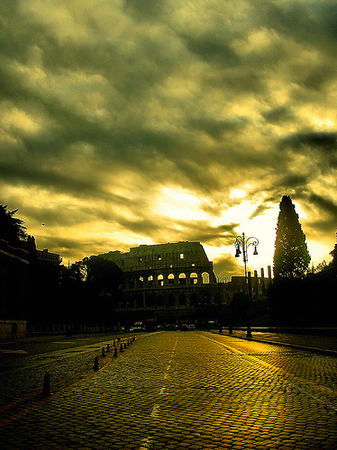 As I’m writing this, the entry fee for the Colosseum in Rome is €12 (there’s a discount if you’re under 18 or over 65, so don’t forget your ID), and during the busy summer tourist season the line to get inside can be agonizingly long. You have a few choices to avoid the long wait – although you could just wait it out, entertaining yourself by watching the Romans dressed as gladiators who stroll up and down the lines and will pose for pictures with tourists for a fee (but be warned, these guys can be crass and rude, and have been known to ask for – and get – exorbitant sums from tourists who don’t know any better), and keeping an eye out for the groups of pickpockets (usually children or gypsies). Right, that choice doesn’t sound like a very good one to me, either.

So, your choices for getting around the long line are as follows:

If you’re visiting the Roman Colosseum during the summer, don’t forget to wear sunscreen and bring bottled water with you – especially if you opt to wait out the lines. There’s no protection from the sun, and it can be brutally hot. Once inside you can duck in and out of the shade for some respite, but believe me – you’ll be glad you brought water with you. There’s nothing to make you thirsty like hot, dry dust.

Also, it’s worth buying the “Rome: Past & Present” guidebook from the ubiquitous vendors outside the Rome Colosseum and nearby Roman Forum. It includes pictures of what the area looks like today, plus cool plastic overlays of what the same area would have looked like when the buildings were buildings instead of piles of rubble. It’s very handy if you don’t have the vision required to see the former grandeur of the place.

Be sure to read these indie travel tips for Rome.

The Roman Colosseum (Colosseo in Italian) is iconic – it’s one of the most famous sights in all of Italy (and in a country full of famous sights, that’s saying something!) – so it’s not something you want to leave off your sightseeing tour of Rome. Its real name is the Flavian Amphitheatre (Anfiteatro Flavio in Italian) – it was nicknamed the Colosseum because of the colossally enormous statue of Nero that used to stand in front of it. In case you were wondering, yes – that guy really had an ego.

At any rate, the Colosseum in Rome is nearly 2000 years old and the largest amphitheatre in the whole of the former Roman Empire. It was used for games and spectacles for almost 500 years, and is still a spectacle itself. During its heyday, it could hold some 50,000 people. The floor is no longer there, which allows you to see down into the maze of rooms and hallways which were underneath the floor – this is where the gladiators, animals and condemned prisoners were kept until they were raised by elevators (yes, I’m using the word “elevator” when describing an ancient Roman structure) onto the amphitheatre’s floor. It’s a feat of engineering that might be ho-hum by today’s standards, but when you’re talking about something built 2000 years ago it’s simply amazing.

While it has been used for other purposes than it was originally intended over the last 1500 years (such as for houses and cemeteries), and while it has been heavily damaged by both acts of man and acts of nature, it is still an impressive structure with a fascinating history. You can read more about its construction and what else it’s been used for over the years here.

The English spelling of the Italian “Colosseo” has been written both as “Colosseum” and “Coliseum,” but since the original name refers to a colossal statue you’ll probably see “Colosseum” more often.

Location: See the map on this page for the Colosseum’s location.

Admission: €9 full fare; reduced entry for EU citizens between the ages of 18-24, and free admission for EU citizens under 18 and over 65; if there’s a special exhibit going on there will probably be a surcharge of €2 or more

More Information: You can now buy tickets to the Colosseum in advance, if you don’t want to try the other ticket-buying options listed above.

Check out this video tour of the Colosseum from GeoBeats:

Colosseum photo at the top by Giampaolo Macorig