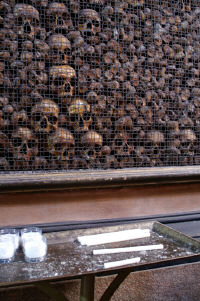 If you’ve been following along, you know that I have an odd fascination with what I call “bone churches.” Before my first trip to Italy, I had heard about a crypt in Rome that was decorated with the bones of thousands of dead Cappuchin monks. It sounded bizarre, and well worth a visit, and I’m so glad I made the side trip back then – the Cappuchin Crypt in Rome is one of my favorite places in the city. So when my friend Jules emailed me a few days ago with the news that she’d heard of a bone church right here in Milan, I knew what my next must-do assignment was.

La Chiesa San Bernardino alle Ossa, or the Church of St. Bernardino of the Bones, is just a couple minutes’ walk from the Milan Duomo in a relatively unassuming-looking church (especially compared to the ornamentation on the Duomo), and the entrance is even on the side that faces a quiet piazza rather than the big street on the other side. Still, I wandered around to the piazza and found the big doors open. I had an hour before the church closed for lunch, which was plenty of time. I pushed open the side door to enter the church and found a perfectly ordinary church, rather small, with nothing particularly spectacular or interesting about it. Most worrying was the distinct lack of any bones anywhere. 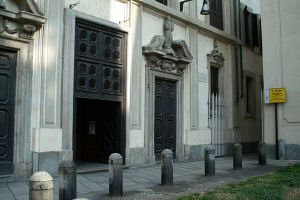 I walked into the main part of the church and peeked around a couple of corners, but didn’t see anything. Then, just as I was about to poke my nose into what looked like an office door just inside the church by the door where I’d come in, I saw the sign I was looking for – the word “Ossario” with a big arrow pointing through two swinging doors. Jackpot. 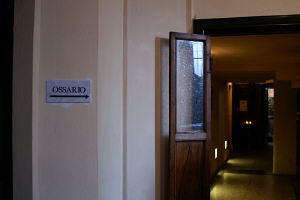 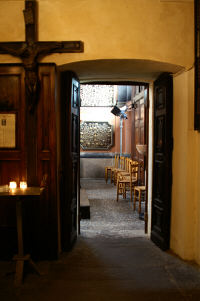 I pushed through the swinging doors and walked down a dimly lit hallway – the whole thing seemed eerie, mainly because I didn’t yet know what lay at the end of the hall and because I was alone in this narrow hall. But a few steps further and I found another small doorway that opened into a chilly one-room chapel, its walls almost entirely lined with cages holding thousands and thousands of bones.

There was a gentleman sitting alone in the San Bernardino alle Ossa chapel when I entered, and he asked me the time. I told him, and then sat down on another chair. I wanted to take pictures, and I hadn’t seen any signs indicating I couldn’t, but I also didn’t want to be disrespectful of someone who was actually praying (or whatever) in the chapel. So I waited and took time to really look at the chapel before finally digging out my camera. The chapel’s footprint is tiny, but the room itself is quite tall. This ossuary is far less intricately decorated than the others I’ve seen, where every single bone in the human body is used in making everything from chandeliers to coats of arms, but almost every wall had cases which reached nearly from floor to ceiling with stacks of skulls as well as arm and leg bones. The walls between the cases (which were all behind metal grating) had some bits of decoration that included bones, but for the most part it seemed like a depository for bones rather than a display of artwork. 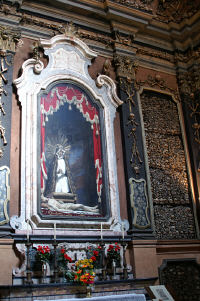 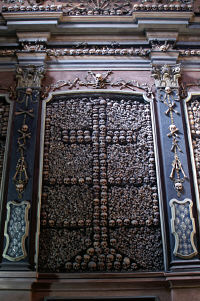 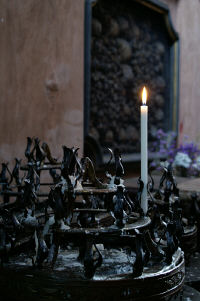 As I took pictures, the man who was there when I arrived left with a “Buongiorno,” and a few minutes later a school group entered. A man who worked at the church gave a little presentation (which I only understood bits and pieces of), and the kids took notes as I stood at the back of the room. One of the things I think I caught from the presentation was that while these bones were from both “the good and the bad,” there was a special case of skulls over the big back doors which were from people that had been beheaded – why they’d been beheaded, I didn’t quite catch – so at least some of the “bad guys” were set apart from the rest of the remains. 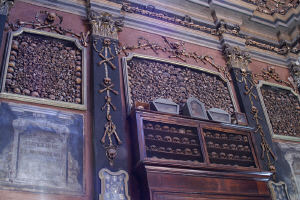 After the school group left, I took a few more pictures and then made my way out back into the main church. The man who’d given the presentation in the San Bernardino alle Ossa chapel met me in the hall and asked if I thought I’d gotten enough photos. When I said yes, he even asked if there’d been enough light in the chapel for me! He seemed particularly proud of the fresco on the rounded ceiling of the chapel, and I had noticed it – there are pieces of fresco which are layered in the corners, giving it more of a 3D effect. In that respect, it’s unlike most frescoes I’ve seen. 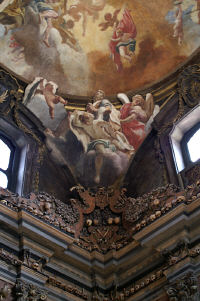 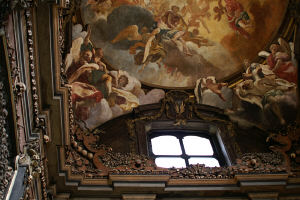 I’ve learned from a bit of online research that the ossuary at San Bernardino alle Ossa came into being because a hospital and cemetery were built next door (at an adjacent church, the Basilica of St. Stephen) in 1145. When the cemetery became full, a room was built to hold the bones in 1210 (the present-day ossuary chapel). Then in 1269 they built the rest of the church. That multi-layered fresco on the ceiling of the chapel was painted in 1695 by Sebastiano Ricci.

Address & Telephone: Church is between Via Verziere and Piazza Santo Stefano (entrance on piazza, on Via San Bernardino); tel. 02 855 6304
Hours: Monday-Friday, 07:30-12:00 and 13:00-18:00; Saturday, 07:30-12:30; Sunday, 09:30-12:30
Mass celebrated Monday-Saturday at 08:30, Sunday at 11:00
Good to Know: When you enter the church, go to the right toward a small chapel. You’ll see a narrow set of swinging double-doors on the left side of that chapel, with a sign pointing to the “Ossario.” Even if they’re not propped open, go ahead on through them and down the hallway to the ossuary chapel.
More Information: There’s a page on the Milan tourism site about the ossuary (in Italian), and also an Italian Wikipedia page about it.
Location: The arrow on this map doesn’t quite point to the doorway to the church; if you get to Piazza Santo Stefano and it’s during the church’s open hours, you should see a set of big double-doors already open right onto the piazza itself.