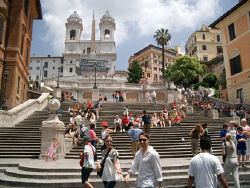 Rome‘s Spanish Steps and the piazza at their base are, collectively, both an incredibly romantic spot to spend an evening with a sweetheart on your arm and also a place to get royally ripped off by vendors and pickpockets alike. Your opinion of the area will certainly depend on which end of the spectrum your experience settles in. Let’s try to make sure you end up more with stars than rage in your eyes, shall we?

The Spanish Steps serve as the backdrop for many displays and events throughout the year in Rome, including extraordinary floral displays in the spring, a nativity scene at Christmas, and a fashion show called Donna Sotto le Stelle in the summer. What you won’t see on the steps, however, is people sitting down and snacking – that’s against the law in Rome. Eat your lunch at a proper table in a cafe or restaurant, or picnic in an approved picnic spot, but not on the Spanish Steps – herein lies the first tip that will help you avoid trouble during your visit to this landmark.

There are a couple of things worth noting in the Piazza di Spagna at the base of the steps – the fountain in the center of the piazza, called Fontana della Barcaccia (Fountain of the Old Boat), and the house where English poet John Keats died in 1821. The building is to the right of the steps, just as you are beginning to climb. Today, the building houses a Keats museum.

Hours: Open all day, every day
Admission: Free (unless you get pickpocketed)
How to Get There: Metro line A, Spagna stop
Where it is in Rome: