You may remember that I recently wrote an article about the long lines in Florence in March for sights like the Uffizi – my goal was to try to implore you to buy tickets ahead of time so that you don’t risk missing out on some of the city’s biggest attractions and that you don’t have to spend your whole day waiting in line to see them. Well, reader Ray chimed in with what I think is an excellent tip – and it’s one I’d not heard of before.

Ray visited Florence last October, and when he learned that tickets for the Uffizi and Accademia were both sold out for the duration of his visit, he actually thought to mention it to the manager at his hotel. The hotel manager then told him about a ticket booth on the busy Via dei Calzaiuoli that usually has tickets, even if it appears that they’re sold out at the official venues.

So, with the directions from his hotel manager, Ray marched over to this mysterious ticket booth and managed to get tickets for both the Uffizi and the Accademia for the very next day. No waiting in long lines, and no booking in advance. What, I had to know, was the story?

I figured the ticket booth was some kind of glorified scalper who, having bought tickets up in advance, was just re-selling them with some kind of additional fee. But Ray says the place looked official, and there was no additional fee or service charge. Instead, this ticket booth appears to be the place to go to buy up other peoples’ cancellations.

The ticket booth is unmarked, and is just a window behind which is a person with a computer. Ray said that when he went, the guy behind the counter spoke pretty good English. He also said the whole process was ridiculously easy, and there was only one other person there buying tickets – that person had also heard about it from his hotel manager (not the same hotel).

Now, I’m of two minds about this – on the one hand, I’m excited to pass on a great tip for those of you who don’t take my advice and book your tickets for the Uffizi or Accademia in advance of your trip. On the other hand, because what you’re buying here are spots that are due to cancellations, there’s still no guarantee that there will be tickets available for you when you show up. There may not be the right number of tickets, or they may not be available at the right time. You’re looking at what’s left here, not getting the pick of the litter.

In poking around the interwebs, I did find a mention of this ticket booth elsewhere, so I’m confident Ray’s not leading me on. (Only joking, Ray.) But after seeing a photo of the outside of the ticket window, I can understand why you’d think twice about what on earth was behind it. 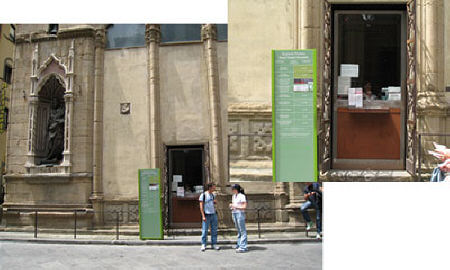 So – here’s my advice. Book your tickets for the Uffizi and Accademia in advance of your trip, if you can. It’ll take all the guesswork out of things. If, however, you are absolutely unable to do this and you don’t want to give up on the notion of seeing these great museums, definitely try this ticket booth that sells cancellation spots. It’s an excellent option to check out before you give up completely.

To find the ticket booth, Ray says to walk south from the Duomo down Via dei Calzaiuoli “about 3 blocks.” The ticket booth is on the right, kind of built into the back of the Orsanmichele church (you’ll see ornamental niches in the walls nearby). “I believe it was the only window at that side,” says Ray. “It was very non-descript and no signs, just a guy sitting at the window at a counter with a computer.”

And because the ticket booth is on the Via dei Calzaiuoli, once you’ve scored your impossible-to-get tickets, reward yourself with a scoop or two of my favorite gelato in Florence at Festival del Gelato. (This is also a good spot to drown your sorrows if even the tickets at this secret booth are gone.)

Thanks for the fabulous tip, Ray! I can’t wait to give it a try the next time I’m in Florence!