Top 10 Things to Do in Sardinia 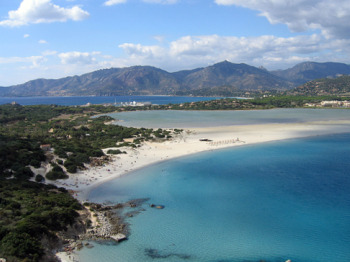 Most people are familiar with the Italian island of Sicily, but not everyone knows there’s another large island off the coast of Italy. Sardinia (Sardegna in Italian) lies to the west of the peninsula in the Mediterranean Sea just to the south of the French island of Corsica.
Only Sicily is a bigger island in the Mediterranean, but Sardinia remains far less visited – so I thought it made sense to introduce you to the best things to do in Sardinia (part of my ongoing “top 10 things to do in Italy” series) with this excellent list of recommendations by Sardinia resident, Paolo Rossi. Take it away, Paolo!
The Sardinian tourism promotion office created a slogan for this Italian island; ‘Almost a continent.’ I couldn’t think of a more striking slogan.
Sardinia is one of the most ancient bodies of land in Europe. Many nations have tried to conquer Sardinia since around 6,000 BC, but not many were able to control the island for a long period of time. Phoenicians, Romans, Moors and Catalans, all have ruled (parts of) Sardinia, and left their tracks at its sandy beaches. This has not divided Sardinia, but has resulted in a culture with a wide variety of flavors, of which ten have been listed below.

Top 10 Things to Do in Sardinia (According to Paolo)

It is impossible to capture an island that is ‘almost a continent’ in just 10 highlights. In order to really experience Sardinia, you will have to come and visit it. Although you can reach it by boat (for example from Civitavecchia, near Rome), it’s probably best to take the plane. That’s a lot faster, which means you’ve got more time to spend in Sardinia.

Paolo Rossi works for travel agency Charming Hotels Sardinia, where he can do the two things he loves most: helping others finding the perfect vacation, and talking about his beloved Sardinia all day long. He (and his colleague Giulia) also blog regularly about Italy at Charming Italy.

photo at top by robad0b, photo of #2 above by Dirk Hartung, photo of #3 above by cristianocani, photo of #7 above by Effervescing Elephant, photo of #8 above by roboppy, photo of #10 above by Fab:o Fo:s; all other photos via Charming Sardinia.