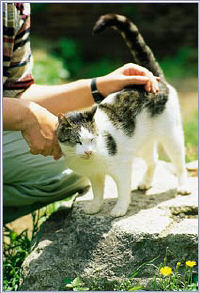 Animal lovers often find themselves taking photographs of foreign cats and dogs and other creatures when they travel – I know, because I do it myself. I’ve often been saddened during trips to Italy when I’ve seen so many homeless animals, clearly hungry and without human companionship – frankly, it confuses me why Italians don’t spay/neuter their animals as a matter of course, but that’s another issue entirely. One organization in Rome is attempting to do something about the stray cats in the Eternal City, and I wanted to help them out with a little publicity. Plus, you can help the people who work with this organization even if you never see any of the cats. Read on to find out how.

Torre Argentina is a Roman cat sanctuary housed in one of the many ancient temples scattered throughout the city. The center is staffed by volunteers seven days a week, some Italian and some from elsewhere, and they house and care for more than 250 cats at present. The name “Torre Argentina” comes from the temple site in which the cats took shelter once it was excavated in the late 1920s. From that time until 1993, the cats were fed occasionally by the women who are known as “gattare” (cat ladies). Then, in 1994, the people who currently run Torre Argentina Cat Sanctuary took over, feeding and spaying or neutering all the cats they could. Since then Torre Argentina has worked to care for the stray cats of Rome, both in their own “shelter” and in the others around the city.

Sylvia and Lia, the generous and kind-hearted women who run Torre Argentina Cat Sanctuary, make it their priority to spay and neuter the cats they find, and they also vaccinate cats which test negative for diseases such as feline leukemia. The ultimate goal with every cat that comes into their care is to find them a loving home with an adoptive family – and some of the Torre Argentina cats have been adopted by people as far away as the United States!

So, now we’re at the part where you can help!

Location: Entrance at Largo di Torre Argentina, corner of Via Florida & Via Arenula (map below)

This may or may not fall under the category of “weird,” but it’s at least a little off-the-beaten-path. There are more weird sights in Rome, too, if you’re in the mood for more different stuff.