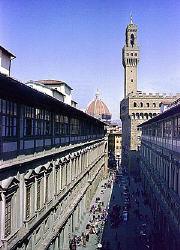 For many, a visit to Florence just isn’t complete without some time spend in the famous Uffizi Gallery (“Galleria degli Uffizi” in Italian). After all, there’s nowhere else on earth that you can sit in the center of a room full of gigantic Botticelli paintings and just drift off into a world of colorful myths and legends.

Unfortunately, everyone wants to see the Uffizi, and most of them will be there at the same time that you’re there (or at least it’ll feel like that). Lines to get into the museum can be hours long, and waiting outside in the hot summer Tuscan sun can be horrible. And who wants to spend a whole day of your precious vacation time in a line? So while I highly recommend a stop at the Uffizi, I even more highly recommend that you make a reservation in advance. But we’ll get to that in a minute. (And if you want to jump ahead, learn more now about booking tickets in advance.)

First of all, what’s inside this Uffizi place, and why do you want to see it, anyway? It’s a reasonable question. The truth is, if you’re really not a museum or art person, you may not feel any qualms about skipping the Uffizi Gallery. But even if you’re only marginally interested, it’s one of those experiences you should go for if you can. After all, this is Florence – the birthplace of the Renaissance – and so much of what’s important about the Renaissance hinges on the art. It is almost counterintuitive to visit Florence and not visit the Uffizi.

Just a few of the many world-famous pieces in the Uffizi collection are:

Now, most of those paintings might not be familiar to you by name, but trust me – you’ll recognize most of them from even the art history classes you barely paid attention to. The Botticelli paintings are some of the most famous in the Uffizi, and even if you know them well you won’t be prepared for how absolutely, breath-takingly huge they are in person. Each one is massive. And the Michelangelo painting is the only known panel painting by the Renaissance master to have to survived. On top of the eye-popping bright colors which are preserved in it, it also happens to be unusual in that it’s round.

But even aside from the glorious art hanging on the walls in the Uffizi Gallery, there is the building itself. This ornate palace once held the offices of the Medici family which ruled Florence for years. Over time, it came to include not just the administrative offices but also spaces for the art the Medici family had collected – and even many that had been commissioned by the Medici. When the family no longer ruled Florence, the art it had gathered became the property of the city and became the basis for the Uffizi collection. Open to visitors since the 16th century, the Uffizi Gallery is one of the oldest museums in the world.

The Uffizi building is in a long U-shape, with the entrance opening from the Piazza della Signoria and the closed end pointing toward the Arno River. The semi-enclosed courtyard between the two wings of the building look almost like a narrow street, and the niches on each side of the courtyard are filled by statue portraits of some of the great Florentines.

There are only so many hours in a day, and only so many square feet of museum space inside the Uffizi buildings – and way more people than they get usher through that space in that time. During the summer high season especially, don’t be surprised to see lines curling out from the gallery entrance all the way around the U-shaped courtyard – and not moving very fast, either. The Tuscan sun may have inspired books, but it’s dreadful to wait outside under its unrelenting stare for hours.

So, be a smart traveler and make a reservation before you arrive. Even if you’re usually a spontaneous person who just wakes up in the morning and decides right then what you want to do that day, trust me when I say you’ll want to make advance plans just this once. It’s easy to book your tour of the Uffizi in advance, either on the phone (don’t worry, they speak English!) or online. You’ll pay a little extra fee for booking in advance, but you’ll thank yourself when you don’t have to wait for hours in line.

Now, will advance tickets let you skip waiting altogether? Sadly, no. Enough people are clueing into the whole booking-in-advance thing that there’s now a bit of a wait for even those of us who plan ahead. However, it may be an hour’s wait as opposed to five, so you can see there’s still an advantage to doing it. If you really can’t be bothered to think that far ahead, then your next best bet is to get up super early and get in line. Don’t forget to bring a book.

Admission: €6.50 full price, €3.25 reduced price (EU citizens between the ages of 18 and 25), free admission (EU citizens younger than 18 or greater than 65)
There are other groups who don’t have to pay full price, so check with the ticket office to see if you qualify for reduced or free admission.
Special exhibits at the gallery often require additional admission fees.

To book in advance: Call 055-294-883 (outside Italy, dial country-code 39 before that local number) or visit the Florence museums website to book tickets online for the Uffizi and other museums in the city. There is a €4.00 additional fee for reservations.

Check out more of what to do in Florence