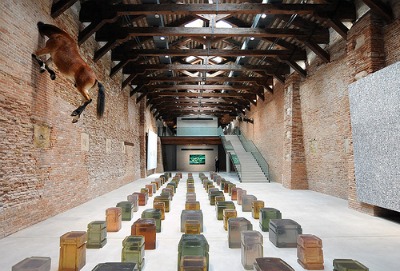 When we think of the words “art” and “Italy” in the same sentence, it’s tempting to think only of the incredible array of world-famous masterpieces from centuries gone by that hang in some of the museums and galleries around the country. But Italy isn’t a country stuck in its past, and in fact in some ways art in Italy is one of the primary ways in which the country constantly moves forward.
One of the best examples of contemporary art in Italy being a major draw is the Venice Biennale. As the name suggests, this is a festival held every other year (in the odd-numbered years) and that takes over nearly all of Venice. In addition to museums and galleries hosting special contemporary art exhibits, churches, public squares, and even some of the palazzi become art galleries during the Biennale.
The Venice Biennale dates back to 1895, but changes have been made to the festival in more recent decades so that there are elements of dance, music, and theatre now included along with the exhibits of modern art. The famous Venice Film Festival is considered part of the Biennale, although the Film Festival takes place every year, and there’s also a Biennale of Architecture that takes place in even-numbered years that falls under the Biennale umbrella.
While the Venice Film Festival and Carnival in Venice attract more popular attention than the contemporary art exhibits of the Biennale, it’s very much a major international event. Unlike the other events, however, the Biennale stretches throughout much of the year – so the crowds aren’t as concentrated as they can be for Carnival or the Film Festival.
Yes, there are always plenty of amazing things to do in Venice no matter when you’re there, but seeing modern art being embraced for such a long time in a city with so much history is just a reminder that Italy is at home in the present as much as the past.

Travel Information for the Venice Biennale 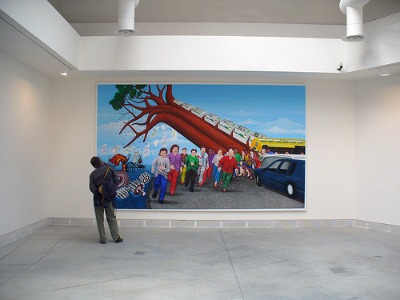 As mentioned, the Biennale is a big international event – but because it doesn’t take place only over one week or even all in one month you may not notice enormous crowds the way you will during Carnival.
Still, it’s a good idea to check the Biennale calendar if you’ll be in Venice in an odd-numbered year so you can find out whether you’ll be there during a big opening or special Biennale event. That could be a fun experience to add to your Venice to-do list, and it could also mean finding cheap hotels in Venice will be even more challenging. Either way, it’s an important thing to be aware of.
Because Biennale events and exhibits take place all over the city (and because Venice is very small to begin with), you don’t need to worry about getting a hotel near the Biennale if you’re visiting the city just for the festival. Still, it’s worth noting many of the Biennale art exhibits are in the Venice Giardini, the city’s public gardens. They’re in the Castello district, at the southeastern tip of the islands.
>> Check the official Biennale website for information about any upcoming events or exhibits, including the Biennale calendar.
photos, top to bottom, by lliazd, canceledmodillion