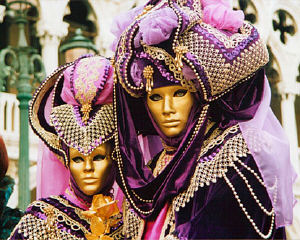 When you think of Venice, what do you think of first? Certainly, the canals and Venice gondolas come to mind quickly, but almost as quickly you’ll get images of people in gorgeous and elaborate costumes – complete with ornate masks – as they celebrate Carnevale each year. While Carnevale (Carnival in English) is a holiday which is recognized throughout Italy, Venice is the most famous city in Italy for its Carnevale festivities. So, if you want to see Carnevale in Venice, keep reading – you’ll need a few tips before you dive in.

First of all, the “when is Carnevale” question isn’t as easy to answer as you might think it should be. It begins roughly two weeks before Ash Wednesday and ends on Shrove Tuesday, better known as “Fat Tuesday” or Mardi Gras (“Martedì Grasso” in Italian). This is generally late January through early February, but check your current calendar to be absolutely sure. It is traditionally a time when Catholics the world over indulge in a bit of excess before Lent begins and they have to give up things they love, like sweets. In Venice, whether or not you’re Catholic it’s still an excellent celebration of decadence.

>> Check out this list of Italy holidays to find out when Carnevale is happening.

Carnevale in Venice dates back to the mid-13th century, and the wearing of masks has always been an important part of the celebration. The idea was that everyone could be anonymous during Carnevale – that nobles could walk amongst the “regular folk” and vice versa, because the masks hid everyone’s identities. This had an extremely liberating effect, as you can imagine, and if you let your mind wander a bit you probably still won’t come close to all the things the masks allowed people to indulge in without guilt or fear of being discovered! Today, the celebrations still include masks but are generally much more tame.

Carnevale celebrations weren’t always popular with those in power, and it was even outlawed at various points in history. In fact, the chaotic festival we see today was only revived in the 1980s. Carnival in Venice has enjoyed a strong resurgence, however, attracting people from all over the world in addition to local Venetians.

One of the most important visual aspects of the Venice Carnival is the mask – it’s just not Carnevale without them! There are three types of traditional masks, but the masks you’ll see in shops all over Venice (not just during Carnival) are of many different styles these days. Venice Carnevale masks are works of art, and you can even get one molded especially to your own face – for a price, of course!

The Carnival celebrations in Venice change a bit each year (every year the city comes up with a new theme for the festivities), but you can count on seeing lots of people parading through the city wearing incredible period costumes and lots of late-night parties (most of which are by invitation only or carry a steep admission fee, and many of which have a costume and mask dress code). There are plenty of things tourists can enjoy during the Venice Carnevale, though, including concerts, gala balls and even a gondola parade. The tickets for many of these events aren’t cheap, but if you’re intent on being more than just an outside observer of the Carnival, then you’ll want to get in on at least one of them.

It should be noted that Venice can be difficult to navigate because of the tiny streets and bridges, twisting canals and near-constant flow of day-trippers that you’ll find on even a slow day. Trying to get around Venice during Carnival can be an absolute nightmare if you’re not prepared for it. If you don’t like crowds, have no interest in Carnival and are on a strict budget, avoid Venice at Carnevale – it would only make you hate Venice, which would make me sad. As long as you’re prepared for what the city is like during this festival, however, you’ll have a blast.

More Information: The official Venice Carnevale website is here, but it’s only in Italian. A really excellent website that has all kinds of Venice Carnival information (including the schedule of events for each year) is here.