Visiting the Duomo in Milan 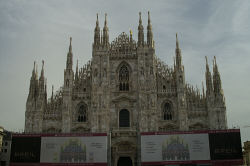 Milan‘s most famous landmark is probably the Duomo, or cathedral, which sits at its heart. It’s one of the biggest churches in the world, a fact which may surprise you when you stand outside it – the Duomo sits on the grand Piazza del Duomo, and beside the immense and beautiful Galleria Vittorio Emanuele II, so it doesn’t actually look as massive on the outside as it feels once you get inside. It does, however, look stunning.

The best news for those who want to visit the Milan Duomo is that it’s free to enter. You’ll pay a fee if you want to enter the Treasury or Crypt (located inside the church) or access the Duomo roof (elevator and stair entrances located outside the church), but to just wander around the inside it’s absolutely free. There are entrances and exits at the front of the cathedral, and also along the right-hand side (if you’re looking at the front) – so if the line at the front is long, peek around the side to see if that door has less of a wait.

Why, you’re asking, are there lines if there’s no tickets to buy? Well, there are still police guarding the doors who have to make sure you’re dressed appropriately (no exposed shoulders or knees) and not bringing in food or drinks. There are also signs directing people to turn off cell phones and not take photographs or videos inside, but while I wandered around I think I was the only person not taking pictures. I even heard cell phones go off inside the church, and people chatting away on them. Now, I’m not religious, but I am respectful of other people’s beliefs, so please do me a favor and be respectful as well. This may be a tourist attraction to you, but it’s a place of worship to many. If you must take photographs (and it should be said the guards inside were doing nothing to stop people who were), whatever you do don’t take pictures of people praying or giving confession (I saw people taking pictures of both). The cathedral is an attraction, the people aren’t. 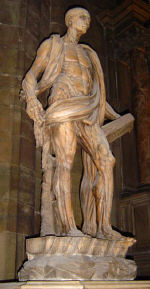 One of the highlights of the interior of the church is a statue toward the back on the right-hand side, which depicts Saint Bartholomew. He was skinned alive, so is often shown in religious artwork as holding his own skin. In this case, he stands with his skin draped around him. The Flayed San Bartolomeo by artist Marco d’Agrate dates from 1562.

Other things worth noting inside the Duomo include:

Visitor Information for the Milan Duomo

Location: Piazza del Duomo – 20122 Milano (there’s a “Duomo” Metro stop that brings you up right in the piazza in front of the church)
Open Hours: Daily 08:30-18:45 for cathedral interior (hours differ for the Treasury and Crypt)
Admission: Free to cathedral interior (€4 for the St. John Baptistery & archaeological area, €2 for the Treasury, €10 for an elevator trip to the roof, €6 for a ticket to walk up the stairs to the roof)
More Information: The Milan Duomo’s official website actually has some good visitor information on it, and in English, too! It’s a bit frustrating to navigate, but the info is there…

History of the Duomo

Begun in the mid 1380s and consecrated in 1418, the Duomo wasn’t actually completed until 1965, when the final gate was put into place. Much of the final work on the facade was actually done while Napoleon was in power, so one of the statues atop the roof is of Napoleon himself. The Duomo’s incredibly long building process gave rise to a common saying in Italy – when something is anticipated to never really end, it’s said to be a “Duomo of Milan.”

The Duomo is covered with spires and statues, giving it an unusual look as compared to many other churches throughout Western Europe. It also lacks a bell tower, which is notable for people who are used to the “campanile” that sits near most Italian churches. At the very top of the tallest spire is the only non-marble statue, a gilded bronze statue of the Madonna, nicknamed the “Madonnina” or “little Madonna.” She is one of the city’s unofficial symbols, and was added in the 1760s.

Milan is not the world’s cleanest city, so the Duomo’s pretty exterior can get pretty dirty in places. It’s recently undergone a massive cleanup and restoration effort, which is set to be finished at the end of 2007. The facade has been covered almost completely for years, frustrating visitors, but it’s now almost completely exposed and should be totally unveiled very soon. The result of the restoration is that the facade of the Duomo simply sparkles, especially when it’s lit up at night. Its true beauty definitely comes through now, and I only hope Milan’s ever-present smog doesn’t work its “magic” too quickly again.