I think I can officially no longer call myself “not really a sports fan.” I’ve become quite attached to my Italian soccer team, and even more attached to the Italian national team – so I know that the next time I’m in Milan, I’m going to make a bee-line for the San Siro Museum. It’s the only museum in Italy that’s physically located inside a soccer stadium, and because San Siro is the home of two of Italy’s top teams, you kind of get a two-fer with your ticket. Of course, if you’re a fan of one of those teams (like I am), you may want to skip the historic stuff from the other team. But that’s your business. The main point is that visiting San Siro is one of those things a true football fan will want to do – whether there’s a game going on or not, a tour of the museum will give you a chance to see the stadium, and soak in a bit of the history of the two famous clubs that call it home. 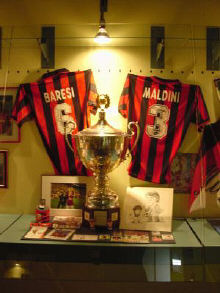 The Museum at San Siro in Milan was opened in 1996, and was created at first from the private collection of one man. Because San Siro is home to both AC Milan and Inter Milan, there are exhibits dedicated to both – including life-sized models of 24 of both teams’ most famous players – and there are also items in the collection from other famous players as well. Soccer fans will get to see jerseys worn by Pele, Maradona, and Zidane, for instance.

After touring the San Siro Museum, perhaps the best part is that (if you’ve purchased the stadium ticket) you then get to check out the famous stadium itself – it is Italy’s largest, holding roughly 84,000 people when it’s full. It was built in 1926, and remains a singular monument in Milan’s skyline. And when I say “singular,” it’s a unique building that some people love and some people hate. I’m not a huge fan of the building itself, but I’d know it anywhere – so it has that going for it.

Nevermind that those likenesses look a little, um, creepy (and that one looks like he’s squatting in a rather undignified way). I totally want to check them out up close.

>> There’s lots more soccer information to be found here – check out my post about seeing a soccer match at San Siro for information about getting tickets and what to expect at a game, learn how to read an Italian soccer schedule so that you’ll know when your favorite teams are playing their home games, and get travel information for Italian soccer stadiums – including San Siro.

Location: San Siro is located at Via Piccolomini #5 – 20151 MILANO
The entrance to the museum is at gate #14 of San Siro. 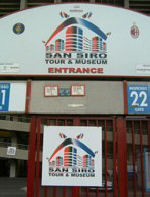