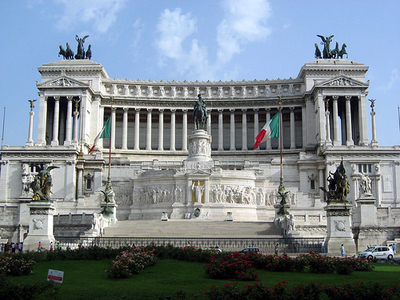 The Vittorio Emanuele II Monument in Rome is known by few nicknames, and most of them aren’t flattering. Alternately known locally as “The Vittoriano” (the only non-derisive nickname I know of), “The Typewriter,” “The False Teeth,” or “The Wedding Cake,” the enormous monument was built in the early 20th century to honor a unified Italy’s first king. Later, the Tomb of the Unknown Soldier was placed inside, along with a museum to Italian Reunification.

Still, Romans – almost to a person – hate it.

Italians are concerned with aesthetics, and the Monumento Nazionale a Vittorio Emanuele II (as it’s called in Italian) is considered an eyesore. Constructed of bright, white marble, the monument is invariably too bright (if it’s recently been cleaned) or conspicuously dirty (if it’s had even a few days to soak up Rome’s ever-present pollution). It’s thought by many to be far too large for the space it occupies, therefore making it seem a bit garish. 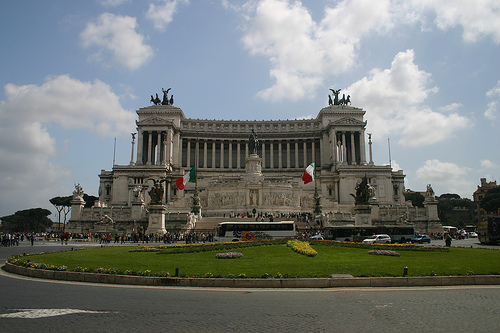 But the monument’s position in the historic center, right next to the Roman Forum, makes it a monument that tourists can visit easily. Until a couple years ago, a trip to the Vittorio Emanuele II Monument consisted of a walk up the steps, a peek at the eternal flame on the Tomb of the Unknown Soldier, and perhaps a stroll through the Reunification museum (Museo del Risorgimento). Now, however, there’s actually a really good reason to visit the monument, and even to spend a little time there. 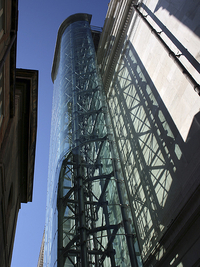 Undoubtedly the coolest attraction at the Vittoriano is the glass-walled elevator to the top, called “Rome from the Sky.” From the top of the monument, you get one of the best views of Rome from anywhere in the city. It overlooks the Forum, so you’ll get a great bird’s-eye view of that, plus you can see over much of the surrounding area. And if you happen to be one of the people who doesn’t like the look of the Vittoriano itself, then you’re in luck – it won’t be in any of your photos.

The trip up to the Quadrighe Terrace (as it’s called) in the elevator isn’t cheap at €7, and you’ve got to climb some stairs to even get to the level where the elevator starts. But the views are spectacular, and because it’s still relatively newly opened word hasn’t yet spread – so you might even luck out and not have crowds to fight once you’re up there.

What do you think? Do you like the Vittorio Emanuele II Monument? Or do you think it’s an eyesore?

Some Views from the Top of the Vittoriano 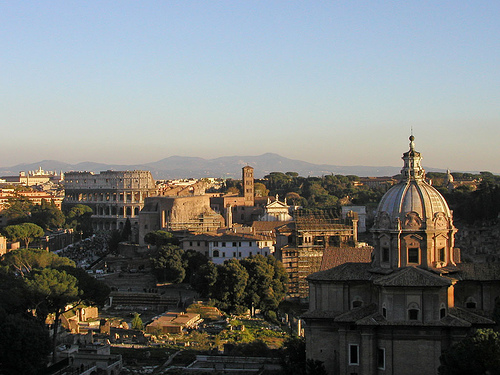 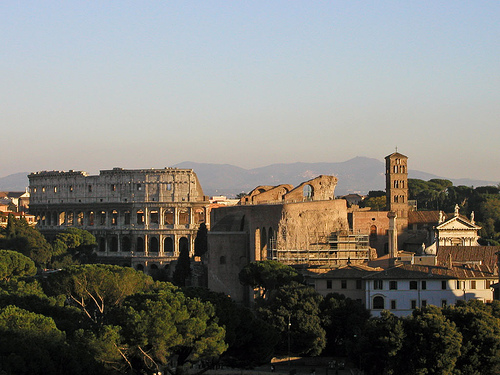 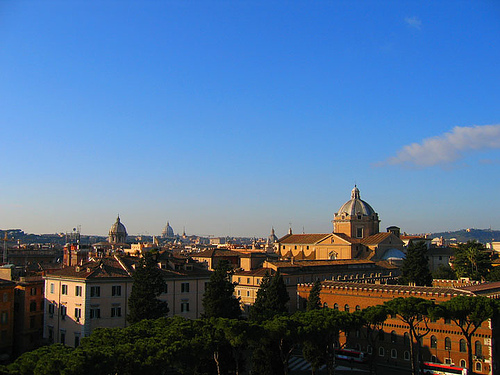 Admission: €7 for adults (reduced prices for children aged 10-18 and adults over 65, children under 10 are free)
Hours: Daily, 09:30-19:30
How to Get There: The entrance to the elevator is located near the cafe around the back of the monument, in the passageway between the monument itself and the adjacent Church of Santa Maria in Aracoeli. Use the stairs at the Piazza del Campidoglio or at the Piazza Ara Coeli for the easiest access.
Good to Know: If you’re unable to negotiate the steps up to the elevator’s entrance, you can ask one of the guards at the doors on the lower level about the private internal elevator, which will take you to the Rome from the Sky elevator entrance’s level.
Also note that for the moment, at least, the telescopes that you’ll find atop the monument are free to use. There are also helpful pamphlets which explain what you’re looking at.

Location: Piazza Venezia
Admission: Free
Hours: Daily, 09:30-16:30 (open later during the summer)
How to Get There: Lots of buses stop in or around the busy Piazza Venezia, so just make sure that stop is on your bus line and you’re good. The nearest Metro stop is probably the Colosseo.