Where to Watch the World Cup in Italy 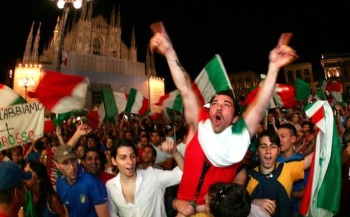 I’ve been asked a couple of times by people on Twitter and via email where to watch the World Cup in Italy. The truth is that Italy, a soccer-mad nation, is one of the places where it tends to be pretty easy to find places to watch the games. Some people will be watching from home, to be sure, but Italian TV is so expensive that most people end up going out to bars or cafes to watch football matches. As a visitor, then, it’s easy to join in on the fun.
The 2010 World Cup is going on in South Africa right now, and since South Africa is on the same time as Italy it’s even easier to figure out what time the games are. Plus, you don’t need to worry about getting up at 4 o’clock in the morning (like anyone on the west coast of the U.S. – like me – has to if they want to watch the earliest games of the day). And while watching the World Cup in Italy is distinctly more fun if Italy is playing well, there will still be plenty of people who are tuning in for the games even if Italy doesn’t go all the way to the final.
Your best bet for finding places to watch the World Cup in Italy is to seek out bars and cafes in whatever city you’re visiting that have a TV. If it doesn’t appear to be on, you can always ask. The World Cup in Italian is “il Mondiale di calcio” (pronounced eel mohn|dee|YAH|leh dee KAHL|cho), and if you don’t want to attempt any more Italian than that, saying “il Mondiale di calcio” with a question mark at the end of it and pointing at the TV should be enough to get the point across.
If you’re seeking out a spot to watch a game that’s already started, you may be able to find them by walking down streets and listening for cheers or other yelling that sounds sports-related. Italians, as you might imagine, aren’t exactly quiet when they watch soccer.
Aside from just hunting down local bars and cafes with TVs to watch the World Cup in Italy, there are two cities in particular that have set up larger public viewing spaces. If you know of a city in Italy that’s got a big screen out somewhere and I don’t have it listed here, please let me know by leaving a comment below – and be sure to scroll down to the comments so you can see any updates, too!
>> Also, you may want to print out this handy World Cup wall chart, with the games listed in local time – which is the same time as in Italy.

Where to Watch the World Cup in Rome

If you’re in Rome you can’t do much better than to head for the official FIFA Fan Fest in Rome. It’s one of only seven cities around the world outside South Africa that has an official FIFA Fan Fest, complete with a jumbo-screen, booths representing FIFA sponsors, and several places to get food and drinks. The Rome Fan Fest is in Piazza di Siena near the Villa Borghese, and it has a capacity of 16,000 people – so for big games you’re likely to have plenty of company. It will be open from 10:00 on all match days, and it’s free to enter.

Where to Watch the World Cup in Florence