Train from Milan to Florence 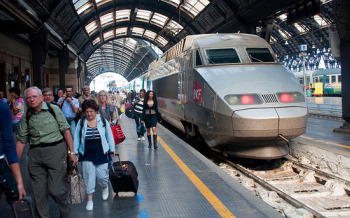 Milan is home to Italy’s second-busiest international airport, but it’s not usually high on visitors’ must-see lists. Even if they spend a day in the city in order to see “The Last Supper” or climb to the top of the Duomo, most travelers who use Milan as an entry point don’t stay very long. Milan doesn’t have the Renaissance flair, medieval cobbled streets, or “Under the Tuscan Sun” vibe that so many people are looking for. One city that does have those things, however, is Florence.

The fastest train option is the “Frecciarossa” (red arrow) train from Milan to Florence, which makes the trip in about one hour and 45 minutes. There’s usually one stop along the way (in Bologna), but it’s a quick one and then you’re on your way to Florence again. The “Frecciarossa” train leaves Milan’s Centrale station en route to Florence’s Santa Maria Novella station once every hour throughout most of the day. Slower trains connecting Milan and Florence can take 3.5 hours or more – and not all of the slower trains go to Florence’s main train station, either, so be sure you know which station you’ll end up in.

The faster trains are, naturally, more expensive, but if you don’t have much time to spend on vacation and you want to maximize your time in a city (rather than on a train) the high-speed trains are an excellent way to do that. A first class ticket on the fastest train costs about €70, and a second class ticket on that train is about €52. On the slower trains, a first class ticket costs about €38 and a second class ticket costs about €28. With the faster trains, you’re required to buy a reservation in addition to your ticket. The slower trains don’t always require this, but it’s always good to ask.

If you’ll be taking several high-speed or long-distance trains during your trip, getting an Italy Rail Pass can really be a money saver, as it’ll reduce the average cost of the more expensive tickets.

>> Read more about how to get from Milan to Florence