Train from Milan to Venice 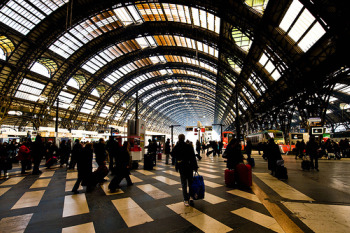 Even though Milan’s busy Malpensa Airport is the second-biggest entry point for foreign visitors to Italy, Milan itself isn’t a city most tourists want to spend much time in. So it’s hardly surprising that as soon as many people arrive, they’re off to another city as fast as possible. One of the most popular destinations is the canal city of Venice to the east, and the good news is that getting from Milan to Venice by train is an easy trip (whether you visit Milan first or not).

There are, of course, several ways you can between these two cities, but the train represents the most convenient and least stressful option. Driving is a hassle on both ends (having a car in the midst of Milan is frustrating, and in Venice it’s not even possible), and there aren’t buses that run between regions that would make this trip easy. You can sometimes find super-cheap fares between the two airports, but with the train you don’t have to hope there’s a bargain ticket price – the fares are reliable.

The trains from Milan to Venice run directly between the two cities (with a few intermediate stops), meaning you won’t have to change trains along the way. The fastest trains make the journey in just over 2.5 hours – these are the newest high-speed trains in Italy, called the “Frecciabianca” (white arrow). Slower trains, which make more stops en route, can take up to 3.5-4 hours. Trains leave Milan’s Centrale station bound for Venice’s Santa Lucia station 1-2 times per hour, depending on the time of day.

>> More information about how to get from Milan to Venice