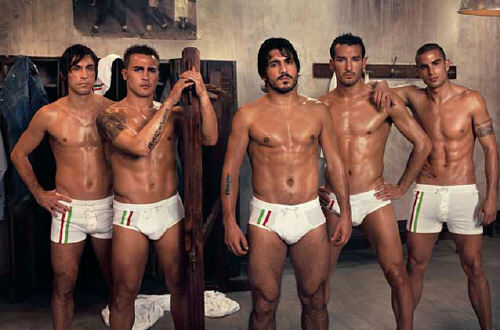 In light of the upcoming Euro 2008 Championships in which Italy’s national soccer team is playing (and favored, at least by some, to win), I thought I’d introduce a lighter side of the sport for those of you who aren’t so terribly interested in the yellow cards or offside calls. I’m calling it: Italy’s hottest footballers.

Just so you know, I’m admitting right up front that this is a biased list. Your choice for #1 Italian soccer hottie might not have made my list, but that’s just it – it’s my list. Of course, your suggestions are welcome in the comments, because I’m also admitting that I haven’t seen every single Italian footballer so I might have missed someone who’s completely worthy of being included here.

At any rate, here are my picks for my top 10 hot Italian footballers (and that means it doesn’t matter who they play for, as long as they’re Italian). They’re not in any real order, except I’ve reserved my pick for #1 for last. The teams each guy plays for are in parentheses after his name. Oh, and there’s a special surprise treat at the bottom of this post. Well, it’s a treat for anyone who likes seeing beautiful men in their underwear, anyway. The rest of you might want to look away.

>> And for those of you not only don’t want to look away but want more of the same, check out the hottest Italian soccer players – part 2! Yes, the hotness continues. Thank goodness.

>> Want some more international footballer hotness? Then check out these hot French soccer players, too.

>> Final note before the pretty pictures – to see many of these guys in moving pictures, check out this musical number from a few years ago when the Italian national team sang a song for charity. Too cute!

So, you may have noticed that there’s an abundance of AC Milan players on the list, yes? Well, since I’m an AC Milan fan, I thought I’d give some love to my team. Also, since I watch more of their matches than other teams, I’m more familiar with the Milan players. Which is, again, why I say you’re welcome to send me your picks for who should be included on a list of the hottest Italian footballers. I may not agree with you, but in the end that’s a good thing – if we all drooled over the same few guys, that wouldn’t be very original. Besides, then only a few guys would be covered in drool. And that’d actually be kind of gross.

And now for your special treat – more Italian footballer hotness! See, after Italy won the 2006 World Cup in Germany, Dolce & Gabbana ran a series of ads using five of the Italian players as models. There’s nothing particularly noteworthy about that fact alone, as many footballers have relatively regular gigs as fashion models on the side. But these ads were noteworthy, as you’ll soon see. They featured three of the fellows I’ve got on my list above, and two others (consider that a bonus).

So, in case you missed these back in 2006, here they are in all their glory for you to enjoy.

Ooh, isn’t that sweet – showing off the Italian colors right after winning the World Cup! (Notice how Zambrotta and Blasi, clearly taller than the other three, have to stand with their feet further apart so they don’t tower over them. Or maybe they put Rino on a box.)
L-R: Andrea Pirlo, Fabio Cannavaro, Gennaro Gattuso, Gianluca Zambrotta (FC Barcelona), Manuele Blasi (Napoli) 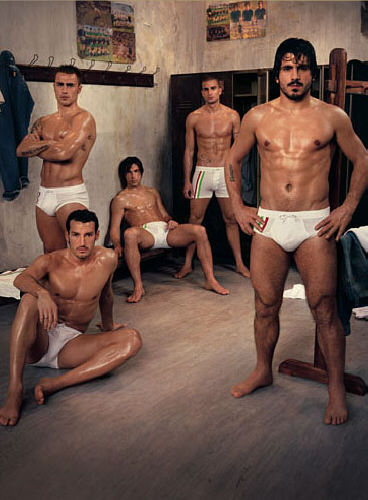 Ooh! Ooh! After I posted this I found yet another in the D&G series. Yay me! Yay for you!
L-R: Gianluca Zambrotta (seated on floor), Fabio Cannavaro, Andrea Pirlo, Manuele Blasi, Gennaro Gattuso 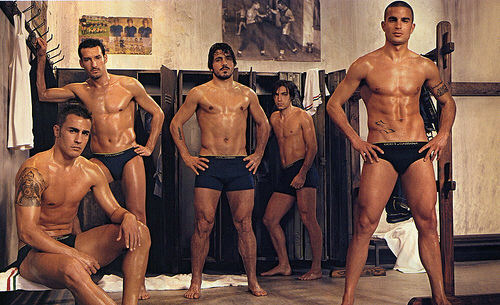 And now for something a little more threatening, to ward of anyone who might think they could beat us in 2010, let’s go with black. My only issue with this picture is that Pirlo is shoved into the background. No one puts Pirlo in a corner!
L-R: Fabio Cannavaro, Gianluca Zambrotta, Gennaro Gattuso, Andrea Pirlo, Manuele Blasi 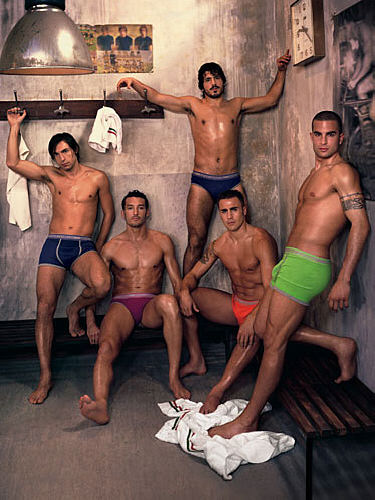 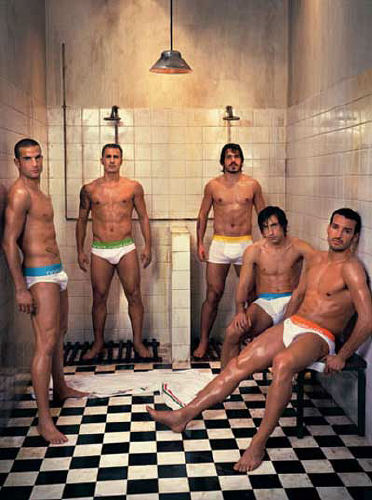 How does Gattuso always end up in the middle in these pictures?
L-R: Manuele Blasi, Fabio Cannavaro, Gennaro Gattuso, Andrea Pirlo, Gianluca Zambrotta

While hunting down those D&G shots, I found other Italian footballers who had performed similar skivvy-modeling duties for the fashion house. These names might not be as familiar to me, but what they’re selling certainly is. 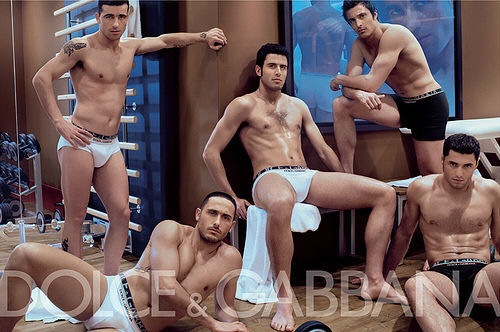 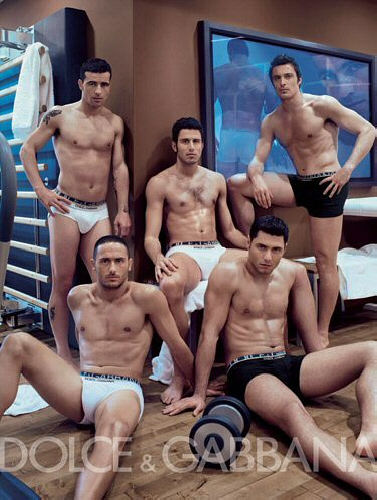 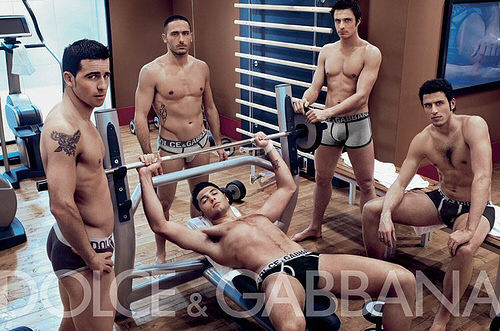 Who are your favorite Italian footballers? Leave a reply in the comments below to share. And if you’d like to see the Italian equivalent on the female side of things, look no further than my post about the hottest Italian women who are dating or married to soccer players!