"A Season With Verona" by Tim Parks – Italy Book Review 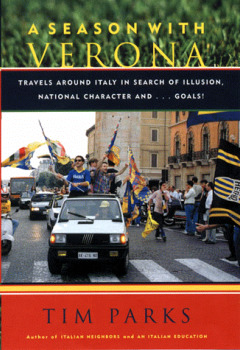 You may already know I’m a big fan of Italian soccer. Even though I didn’t think “Winning at All Costs: A Scandalous History of Italian Soccer” was particularly well-written, it was incredibly informative and educational for a fan of the beautiful game like myself. So you can imagine how thrilled I was to find a book about Italian soccer that wasn’t just informative but also a joy to read.
“A Season With Verona” by Tim Parks tells the story of the season Parks spent following one team’s most ardent supporters to every single game. Parks is an Englishman who has lived in the city of Verona since the mid-1980s, and he’s the author of many works of fiction. My introduction to his writing, however, was this book – and I now think that if his non-fiction is this much of a page-turner, his novels must be gripping.
For “A Season With Verona,” Parks not only goes to every single game of his Hellas Verona team in a 36-game season, he also travels to most of the away games the same way the hard-core fans do – sometimes on extremely long overnight coach trips from Verona in the far north of Italy to cities like Bari in the far south. While Parks was already a long-time Hellas Verona fan by the time he decided to write the book and had spent many seasons sitting with the fans in the home stadium, he hadn’t gone to many away games – and he hadn’t traveled with the fans.
Parks gets to know the Hellas Verona supporters over the course of the season, and so does the reader. You’re tempted to think of it as character development, but these are real people and not creations of Parks’ imagination. In the beginning they’re more than a little off-putting – they seem dangerous. By the end of the book they seem like people I wouldn’t mind traveling to an away game with myself.
Most of the book “A Season With Verona” is structured so that a chapter covers one week of the Italian soccer season. Each chapter, therefore, culminates with the results of that week’s game. The effect this has is that unless you already know how that season ended when you start reading (I didn’t), the excitement of the season builds with every chapter as you wonder whether the team will win or lose.
Obviously if you’re a soccer fan, it’s a book you’ve either already read or you have on your must-read list. If you’re interested in Italian culture, you probably already know how important calcio is to most Italians and you might find the book interesting as an insight into soccer culture in Italy.
But I think the triumph of “A Season With Verona” – the thing that makes it accessible and interesting to more than just readers who are interested in Italy, Italian soccer, or soccer in general – is that it becomes something of a psychological study of fandom. If you’re a fan of any sport, or if you’ve ever been curious about what makes fans tick, you’ll find this book fascinating.
Why do we fans wear certain “lucky” items of clothing to games, despite the fact that the last time they wore the “lucky” duds their team lost? What makes fans live or die by their team’s successes or failures, even while the players don’t seem to take things as seriously? How do fans who are completely out of their heads on game day carry on a “normal” existence and hold down jobs like regular people?
Because Parks is traveling with – and getting to know – the Hellas Verona fans rather than telling the story of a season from the team’s point of view, his book becomes a study in what goes on inside a fan’s head. And even though I’m someone who loves Italy, Italian culture, and Italian soccer, it’s this aspect of “A Season With Verona” – Parks’ ability to unravel the complicated experience of being a die-hard fan – that I found to be the most unexpectedly enjoyable element of the book.
>> Buy Tim Parks’ “A Season With Verona: Travels Around Italy in Search of Illusion, National Character, and…Goals!” on Amazon
>> And check out the other Italy book reviews I’ve done for more reading material.