"Winning at All Costs: A Scandalous History of Italian Soccer" by John Foot – Italy Book Review 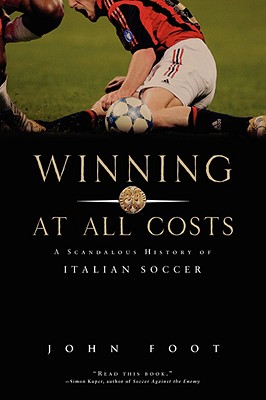 Although I’m admittedly a bit of a latecomer when it comes to being a sports fan, I’ve taken to Italian soccer wholeheartedly. I was pleased, then, when I got a note from the publisher of a book on the history of Italian soccer asking if I’d be interested in receiving a review copy. But now that I’ve finished the book, I can say that it’s almost as much about Italian history and Italian culture as it is about the country’s most popular sport.
“Winning at All Costs: A Scandalous History of Italian Soccer” is a book by John Foot, a man with a perfect name for a book about soccer. Foot has long split his time between London and Milan, teaches modern Italian history in London, and writes books on Milan and Italian history. It’s no wonder, then, that the book isn’t just about sport. Rather, it shows how inextricably tied the world of soccer is to Italian culture.
First published in 2005, “Winning at All Costs” tells the story of how a game introduced in northern Italy by foreign soldiers and businessmen in the 1890s could become a national obsession to the point where soccer-related deaths weren’t all that uncommon. It’s clear that Foot has affection not just for Italian soccer but for Italy, but as a foreigner himself he’s also perhaps better able to see the links between the national sport and the nation itself. And those links aren’t always flattering.
As a sports history book, “Winning at All Costs” gave me a better understanding of some of the long-standing rivalries between the teams of today. It told me about the tragedies which have struck various teams over the years, and which are still remembered each year. It provided context for the ferocity with which the most rabid fans cheer on their teams. Sports fans and especially Italian soccer fans will enjoy the book for its history alone.
But anyone who’s looking for a greater understanding of Italian culture can’t (in my opinion) ignore the importance placed on soccer, so aspects of this book might be of interest to Italophiles in general as well. If you’re not into soccer, there are parts which will undoubtedly be a little confusing and/or boring, but in particular the chapters about soccer scandals, the media, the fans, and some of the violent episodes which have plagued the sport may be interesting. Foot also wrote an afterword in the edition I have, republished after Italy won the 2006 World Cup, to include information about the country’s fourth World Cup title as well as the massive match-fixing scandal which was going on at the same time in Italy.
In short, any soccer fan who doesn’t already live and breathe the sport’s history in Italy would likely enjoy this book, and Italophiles who don’t quite “get” why soccer is such a big deal in Italy would do well to learn from the book. But anyone with a rose-tinted-glasses opinion of the way Italian soccer works will either need to brace themselves for reality or avoid “Winning at All Costs” altogether. Because in some ways, Italian soccer is like sausage. It may be absolutely beautiful to watch, but you don’t necessarily want to know how it’s made.
>> Buy John Foot’s “Winning at All Costs: A Scandalous History of Italian Soccer” on Amazon
>> And check out the other Italy book reviews I’ve done for more reading material.
Full Disclosure & Whatnot: Just so y’know, the publisher sent me a copy of this book for review purposes.