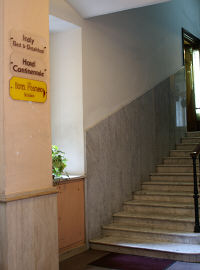 I’ll admit that prior to my most recent trip to Italy, I’d never stayed in a hostel. And I had private rooms in all the hostels I stayed in on that trip, too. It’s not that I don’t like people, it’s that I’m just not the backpacker type – for one thing, I’m far too old, people. Trust me. But after forking over so much for Rome airfare these days, I still want to save money on my room. I’m the sort to stay in budget hotels when I’m booking my own trips. I visited several cheap hotels in Rome during my March visit, and one of them was the Hotel Positano.

Hotel Positano is a two-star hotel near the Termini station in Rome, on the northeast side of the station (this is the side most people will tell you is nicer and less dodgy). It sometimes bills itself as a Rome hostel/hotel, because on the top floor there are some “dorm-style” rooms, but the majority of the rooms here are hotel rooms, and you won’t feel like you’ve booked yourself into backpacker central here, either.

The hotel is located in a building with at least three other budget hotels, and is a short walk from the M&J Hostel – in fact, the folks at M&J will send people to Hotel Positano if they’re full, or if people want a little more privacy than M&J can accommodate. The reception desk, manned by the friendly Ercole when I visited, is on the 2nd floor (1st floor in Italian), and there is an elevator if your room is on an upper floor. (The picture at the top of this post is the lobby area when you walk into the building off the street; you look to the right, and the staircase leads you up to the Hotel Positano – it’s incidated by the yellow sign on the bottom.) 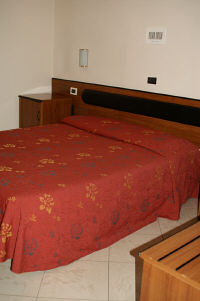 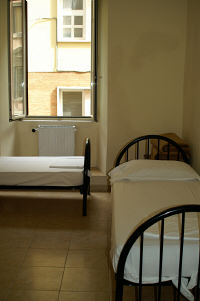 L-R: Example of a room with double bed; example of double room with separate beds

The hotel rooms are basic, but they’re clean and the staff was both friendly and helpful. With their location near Termini, the Hotel Positano is able to offer lower rates than hotels in more central Rome – but you’re still close to pretty much everything you’d want to see and do. And the bus stops right at Termini, making it easy to get around and then get back to your hotel at night. (You can hop on the Metro at Termini as well, but I find the Metro nearly useless for most destinations in the city.) 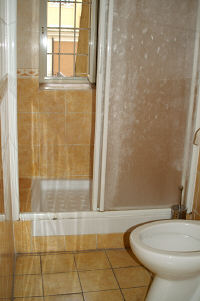 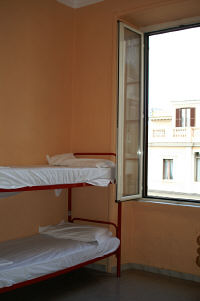 L-R: Example of a private bathroom in one of the hotel rooms; example of a dorm-style hostel-ish room on upper floor

Some of the rooms at the Hotel Positano overlook the street, while others are interior rooms – the interior rooms are quieter, so if you’re a light sleeper or you just don’t like city noise at night, ask for one of those. There are singles, doubles and triples available, as well as the hostel-ish rooms on the top floor. The hotel rooms all come with private en-suite bathrooms, as well as TVs, mini-fridges and hairdryers. The hostel rooms don’t have bathrooms in them, the bathrooms are shared and down the hall.

If you’re graduating from your hostel days but you’re not quite ready to splurge on a three-star hotel yet, cheap hotels like the Hotel Positano are a perfect compromise.

Location: Via Palestro, 49 Rome 00185
Contact Information: Tel: (+39) 06 490360 – Fax: (+39) 06 4469101
Stars: Two stars
What’s Included: continental breakfast, towels, linens (towels may not be included with hostel rooms)
Features: air conditioned rooms, bus and walking tours organized from front desk, telephones in rooms (wake-up calls available)
Transportation Options: Termini station is within walking distance, Metro & bus stops right at Termini
Good to Know: The interior rooms are a bit quieter than the ones overlooking the street.
The front desk is open 24 hours a day, so there’s no getting locked out or having to ring a doorbell if you have a late night out.
You’ll need to pay for your entire stay right when you arrive, so be prepared for that.
Payment Accepted: major credit cards, cash
Booking: Hotel Positano booking