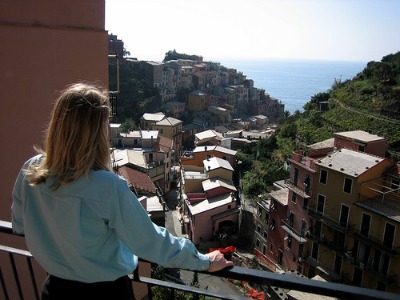 When the initial giddiness of choosing a vacation destination wears off, it’s time to start planning out the nitty gritty details. Unless you’re a non-planner who arrives in a place with nothing more than plane tickets in and out, chances are good you’ll start by figuring out what you want to do and where you want to stay.
In some places, the “where to stay” question can be more difficult to answer than you’d think it should be – and the Cinque Terre is one of those places.
With a little bit of advance knowledge about how to find a place to stay in the Cinque Terre, it becomes an easier task to do from afar – but, as you’ll soon find out, doing a simple search for “where to stay in the Cinque Terre” can turn up some odd-looking results.
Here are a few things to understand before you start searching for accommodation in the Cinque Terre.

“Cinque Terre” is Not the Name of a City

The first thing to understand about looking for a hotel or hostel in the Cinque Terre is that by definition, you’re going to have a harder time doing a general search for accommodation than you might if you were looking for a hotel in Rome, for instance. This is because while Rome is a city with relatively easy-to-define borders, the Cinque Terre is a region.
If you were hoping to book a stay in Rome, you wouldn’t type “hotel in Lazio” (the region Rome is in) into a search engine because Lazio is a big area surrounding the city and you couldn’t be sure how close your results would be to Rome’s city center. The same goes for the Cinque Terre, albeit on a much smaller scale.
You can certainly do a search for a “hotel in the Cinque Terre,” and you’ll get results – but unless you know the names of the towns in the Cinque Terre or where they are in relation to the hotel results you get, you’ll have a harder time determining where your accommodation will be in relation to things like the Cinque Terre hike, the beaches, the train stations, and the town centers.
>> Further reading – Learn more about what “Cinque Terre” means

While there are what we’d think of as traditional hotels and hostels in the Cinque Terre, the bulk of the accommodation choices are room and apartment rentals. A decade ago or more, you could show up in the Cinque Terre without any reservations (even in the high season) and there would likely be women with “room for rent” signs at each train station. That’s no longer the case, as the area is so popular that those women have their rooms booked up well in advance and have no need to stand around advertising at the train station anymore.
Let’s say, then, that you’re one of the people who’d like to book your stay in the Cinque Terre before you arrive so as to not get stuck in a hotel miles down the road. Your next hurdle is that many of the people who manage a collection of apartments throughout a given town aren’t necessarily web-savvy – they may have a website or an email address you can locate, but they’re less likely to have an online booking system like a hotel would. In other words, if you can’t close the deal via email be prepared to call them to give them your credit card number (after making sure there’s someone on staff who speaks English well enough).
The kinds of lodging you’re most apt to find in the Cinque Terre are small apartments for short-term rentals, or individual rooms for rent in a flat that’s been broken up to be more like a B&B (minus the breakfast part!). Because these tend to be pretty budget-friendly for the area, they’re often listed under “hostels” even though they’re a far cry from what we would consider a traditional hostel. You can also look under “vacation rentals,” and there are several traditional hotels in the area as well.
>> Further reading – Learn more about how to get around in the Cinque Terre

To get you started in the search for the ideal place to stay in the Cinque Terre, here are some links to listings for hotels, hostels, and apartment rentals in the area. Just be sure you’ve got an idea of where each of the towns listed below is so you know whether it’s in the Cinque Terre proper or is outside the towns but still potentially a good base of operations.