St. Mark’s Bell Tower Gets a New Belt in Venice 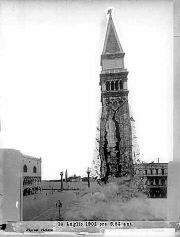 Anyone who makes a concerted effort to see the leaning tower of Pisa is on a mad quest to see one of many leaning towers throughout Italy. Almost every little town and city with towers has one that’s slightly off-kilter. One of the symbols of the city of Bologna is its pair of leaning towers. Venice, a city that’s constantly shifting and sinking, has several leaning towers dotted around its islands. And apparently that’s plenty for the Venetians.

The campanile, or bell tower, for St. Mark’s Basilica in Venice is going to be reinforced with a titanium “belt” in order to keep small cracks first noticed in 1939 from spreading any further. This “belt” will be underground, however, and so won’t be noticeable at all to passers by.

If you’re thinking that cracks which were first noticed in 1939 are probably fine and they shouldn’t be worried about them if they haven’t expanded already, then allow me to explain. Venetians have some experience with watching the campanile topple over, and they’d like to not have that happen again.

The original tower on that spot was built in the 12th century, and it received a major overhaul in the early 1500s after being damaged in an earthquake. It then fell to the ground early one morning in July 1902. (The photo above is from that morning.) An exact replica was completed in 1912.

“Workmen had been repointing the Campanile, and had discovered a bad crack starting from the crown of the second arched window on the corner toward St. Mark’s. This crack had shown signs of opening further, and they feared small fragments falling down on the crowded Piazza; so the music was quietly stopped in the hope that the crowd would naturally disperse. The effect was exactly the opposite of that desired. Every one rushed to the Piazza.

“At eleven I was under the tower which rose in the dim moonlight. The crack was distinctly visible even in this half light, but apparently menaced only a corner of the tower. On Monday, early, the Campanile was resplendent in the sunshine. At nine my little girl Katharine went off with her horns of corn to feed the pigeons. Mrs. — was at St. Laccana, and I was near the Rialto sketching. The golden Angel on the tower was shining far away. Suddenly I saw it slowly sink directly downward beneath a line of roofs, and a dense grey dust rose in clouds. At once a crowd of people began running across the Rialto towards the Piazza, and I ordered my gondolier to the Piazzetta. On arrival the sight was pitiful. Of that splendid shaft all that remained was a mound of white dust, spreading to the Walls of St. Mark’s.”

So, let’s just hope this belt thing does the trick this time.

For a small fee, you can ride an elevator to the top of the bell tower for a lovely view of the top of St. Mark’s as well as over the Grand Canal. Just be careful about the timing of your visit. as the gigantic bells are right above the heads of visitors, and they’re not quiet. If you’re there near the hour, be sure to cover your ears.