The Cinque Terre is Closed 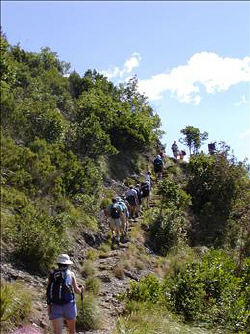 Okay, it’s not really closed, but I’m beginning to think it should be. At least sometimes. I know I’m going to ruffle some feathers here, but I think the Cinque Terre – while beautiful – should be off-limits to about 75% of the people who tramp through it each year. Just hear me out on this one.

The five villages of the Cinque Terre have been overrun (and, some would say, overdone) for several years, and it’s only getting worse. Most of the visitors to this once peaceful area are fighting heavy foot traffic through the quaint but overcrowded village centers, and are doing lasting damage to the cliffside paths that link them. Whereas it was once no problem at all to stumble off the train in any one of the towns and find plenty of rooms for rent at a moment’s notice, the crowds are making that more challenging – not to mention that with such demand the prices for the rooms which are available are going up. Anyone can appreciate the stunning views the Cinque Terre offers, but when you can’t see them for the crowds they kind of lose something.

I’ve written before about overhearing a conversation in a Vernazza bar between a Rick Steves tour guide and the bar owner, about how Rick sometimes expresses regret that his rhapsodizing about the Cinque Terre has helped contribute to its overcrowding. I wouldn’t blame him entirely, as he’s certainly not the only one who comes back from the Cinque Terre gushing about the place – but the Rick Steves effect is definitely noticeable. One former Vernazza resident who asked not to be named says that:

At the very least, there needs to be a maximum daily visitors policy. Vernazza, for one, just can’t shoulder the load anymore. Even late April is becoming ridiculous. It’s not just the over-abundance of Americans anymore. It’s everybody. I’ve watched thousands of Germans, walking sticks in hand, ravage the newly-replaced paths in under a day.

Each winter, the walls have to be completely reconstructed, the paths renewed, and since they don’t traditionally use mortar (and are now prohibited from doing so by park policies), this is a painstaking task. An 8 ft by 8 ft piece of wall takes around two to three days to rebuild. And there are only a few guys who actually still know how to do it well.

Everyone’s writing about Italy (tis the season), and the Cinque Terre in particular. In a short span of time, I found an article in the New York Times about a long weekend in the Cinque Terre, several pieces referring to the NY Times piece and one article that says it’s about the “secret side” of the Cinque Terre. And if you’ve seen pictures of the place or talked to anyone who’s ever been there, it’s not surprising why people keep going there. All I’m saying is that if we thought more about the future and less about ourselves in the here and now, we might be approaching this differently.

If people continue to flood the tiny Cinque Terre towns, they might get to point to their photos right now – but what will be left for future generations, not to mention the residents themselves? Of course, it’s easy for me to say this – I’ve been there. Twice, in fact. And I really enjoyed my stays, both times. The second time, however, the paths between the towns were difficult to navigate because of the sheer number of people on them, and I was even nearly knocked down a long flight of stone steps by someone with a large backpack going the opposite way. Accidents can and will happen even with only a few people on a trail, but the likelihood of accidents is far greater the more people you try to cram onto a trail that’s only a couple feet wide and doesn’t have a barrier rail between you and the ocean far below.

Still, even though I’ve been there and so I’ve already “gotten mine,” so to speak, I think that for the sake of the Cinque Terre it makes sense to think about something akin to the permits which are required to raft the Grand Canyon. If you’re not familiar with the system, you get on a waiting list for a permit, and the wait can often be 10 years. If you and your spouse are both on the list and your spouse’s name comes up first, you can’t go on that trip or you’ll forfeit your own permit. I’m not sure something that dramatic would be required (or even feasible) for the Cinque Terre, but here’s what I think would work.

In order to visit the Cinque Terre, you’d need to apply for a permit for specified dates. You’d either be told that your permit was approved – because there were still rooms available, or the maximum visitor number hadn’t been met, or whatever the criteria was – or you’d be told that period was already full. You could also be told what dates weren’t already full. Better yet, the system would be online so you could see on a calendar what dates were already booked. There could be different permit types for people who were not planning to stay overnight in any of the towns but only wanted to do the hike, or spend a day at the beach, and move on. But the overall idea would be that it wouldn’t be open season on the Cinque Terre.

Now, who won’t like this idea? I can think of a few groups that would resist it.

So, is a permit program even possible in the Cinque Terre? I doubt it. There are too many people still gushing about the place, and too many people who would say it’s not fair. And to some extent, I agree – it’s not necessarily fair. But then again, is it fair to destroy a national treasure (even if it’s done out of love, the end result is the same) so that future generations will only be able to hear stories of how lovely the Cinque Terre used to be?