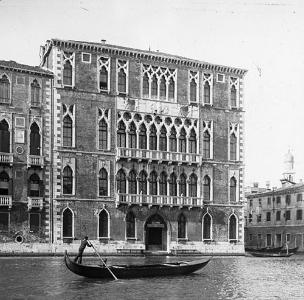 Venice has been described as a theme park for adults. It’s a fantasy world – a place you can’t believe is real until you’re there, and even then you’re still not sure. So if you’re looking for a hotel in Venice, you may not want to settle for the standard fare. You may have more demanding criteria than just finding a hotel near St. Mark’s Square. You may, in fact, want to stay in one of the unique hotels in Venice.

Now, it could be argued that every hotel in Venice is unique, simply because it’s in Venice. But you know better. This city is famous for its high-priced and yet still mediocre hotels, but there are a few properties in Venice that merit the title of “unusual” or “different.” These are some of the most unique hotels in Venice, each for quite different reasons.

There’s a map of Venice below, with the unique hotels in Venice marked on it. You can get more information about each hotel by clicking on the icon on the map, or by scrolling further down to read a brief synopsis of what makes the hotel special.

>> And here’s a bonus – as of March 2010 I’ve updated the map to include two more unique Venice hotels, listed at the bottom, so you get 7 hotels to choose from instead of just 5. Enjoy!

Ca’Pisani Hotel
Dorsoduro 979a – 30123 Venice
Ca’Pisani is called a “Design Hotel,” so right away you know there’s something a little different about this place. After all, Venice isn’t known as a fashion city (although, to an extent, every city in Italy is kind of a fashion city). But rather than relying on the inherent beauty of the decay that’s all around the city, Ca’ Pisani Hotel has re-done the entire interior of the building – you set foot inside and you’re instantly transported into a chic, modern hotel that would seem fitting in Paris, Milan, London or New York.

The hotel occupies a 16th century former palazzo, and its 29 guestrooms been fully remodeled to evoke the Art Deco era of the 1930s – but in a way that makes the decor (and the hotel) feel modern even today. While there are some antique furnishings from the 1930s and 1940s, because they’re set against the backdrop of this crumbling city the effect is anything but old-fashioned. And there are plenty of actual modern touches throughout, so you won’t be stuck using a bathroom of the 30s, either. 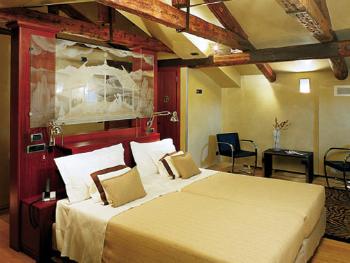 Savvy travelers will also appreciate that the Ca’ Pisani is in the lovely (but not super-touristy) Dorsoduro neighborhood on the other side of the Grand Canal from St. Mark’s. The modern art collection Peggy Guggenheim amassed is on display in the museum bearing her name, and that’s right next door to the hotel. One of the bridges crossing the Grand Canal, the Accademia brige, is just a short walk from the hotel’s front door. And the hotel has an in-house restaurant if you just don’t feel like going out for dinner.

Low-season rates at Ca’Pisani Hotel start at around €160 for a standard room, and that same room can be as low as €175 in the high season. Breakfast is available at the hotel (and served outside in the summer), but it’s not included with the price of the room. WiFi is complimentary.

Abbazia Hotel
Cannaregio 68 – 30121 Venice
There’s history in Venice everywhere you look, and some painfully gorgeous religious buildings as well. Combine those two things, then turn it into a hotel, and you’ve sort of got the idea of the Hotel Abbazia. The hotel occupies a building which was once a 19th century abbey of an order of Barefoot Carmelite Friars – and there’s still a chapel there, complete with 18th century religious statues.

Today, however, the abbey is only a hotel – complete with a beautiful private inner garden where you can kick back and soak up the tranquil atmosphere (which is especially nice if you’ve had to fight the crowds of St. Mark’s Square). Perhaps most interesting is the bar/dining area, which still has the old choir benches lining the walls and the raised pulpit from which prayers used to be read. 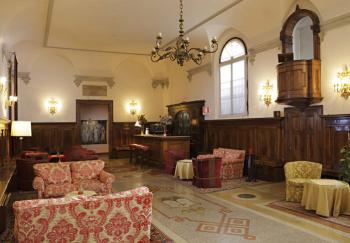 Abbazia Hotel is a short walk from the city’s main train station, but you’d never know that once you’re inside. The rooms are nicely (if simply) decorated, and the staff is friendly and helpful.

A double standard room at the Hotel Abbazia ranges in price from €95-270 depending on whether you’re visiting during the low season, high season, or during one of Venice’s real peak times (like Carnival). Breakfast isn’t included in the price of the room, but you can choose to add it – and in nice weather you can enjoy it in the private garden.

Charming House DD724
Dorsoduro 724 – 30123 Venice
With a name like “Charming House,” it’s hard not to be intrigued. And one look at photos from this uber-fashionable hotel is all it will take to make you want to book a room. Like Ca’Pisani above, Charming House DD724 uses Venice’s dilapidation as the backdrop for a supremely modern interior – which, as it turns out, is a winning juxtaposition.

DD.724 is in the artsy Dorsoduro neighborhood (that’s the “DD” in the name – and the 724 is the hotel’s address), a short walk from the Peggy Guggenheim Museum and the Accademia Gallery and bridge. It’s not all sumptuous overstuffed furniture, but this place can easily qualify as seriously romantic if for no other reason than it’s almost hidden. The front door opens on a tiny alleyway, and there’s not even a sign out front. Plus, with only seven rooms in the whole hotel, there’s a feeling of intimacy here from the start. 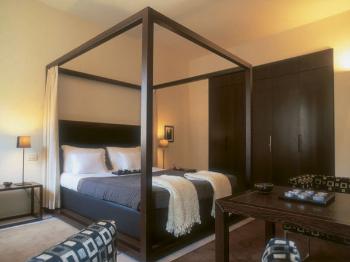 While Ca’Pisani takes its design cues from the “modernistic” Art Deco movement, Charming House DD724 is all about today – the place is all about sleek design and clean lines, and you won’t find much in the way of bright splashy colors anywhere. But you will find all the modern conveniences (including LCD TVs and WiFi in all the rooms) in this truly unique hotel in Venice.

Room rates will range between €230-330 for a standard (depending on the season), and you’ll get a complimentary continental breakfast with your stay. And, if you’re lucky enough to find Room G available, you can have a breakfast in your room on your own private terrace.
>> Book Charming House DD.724 hotel in Venice

Hotel Palazzo Priuli
Fondamenta de l’Osmarin 4979 – 30122 Venice
In Venice, there’s no shortage of restored Venetian palazzos that have been turned into hotels. In fact, with so few actual Venetians living in the city anymore, I wouldn’t be surprised if it was only a small number of palazzi that were still occupied by locals. So the fact that the Palazzo Priuli Hotel is a restored 14th century palazzo-turned-hotel isn’t what makes this place special. Instead, it’s the fact that it’s been decorated to look like it’s still in the 14th century that makes it unique.

The furnishings in the Hotel Palazzo Priuli aren’t 14th century antiques – but they’re modern replicas of said antiques, and filling the hotel with pieces from when it was a brand-new building makes a stay in this hotel particularly special. There are 27 rooms to choose from, each one individually decorated, and if it weren’t for the modern amenities every hotel has you’d feel like you’d stepped back in time in any one of the guestrooms. 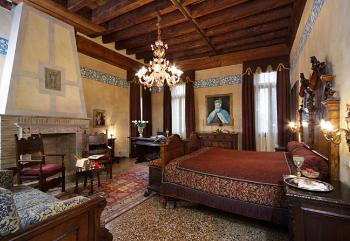 Palazzo Priuli Hotel takes its name from the prominent Venetian family which once called the building home, and which included three Doges and five cardinals, so the place still retains the feel of a prosperous family home. Fine art reproductions hang on the walls, and the nicest Murano glass adorns the chandeliers. The fact that the hotel is a short walk from St. Mark’s Square makes it excellent as a tourist hotel, but the chances of you feeling like an ordinary tourist after a stay here are pretty slim, indeed.

A double room can cost as much as €260 in the high season, but if you’re visiting in the low season you can enjoy the same room for under €100. And you’ll get complimentary breakfast and internet access included.

Palazzo Barbarigo
San Polo 2765 – 30125 Venice
Like the Palazzo Priuli listed above, Palazzo Barbarigo is another restored Venetian palazzo that’s been turned into a hotel. But before you yawn, let me tell you two additional factoids about this hotel – it’s right on the Grand Canal, and it’s been remodeled not to its original splendor but to reflect the style of the 1920s. Do I have your attention now? I thought I might.

Palazzo Barbarigo was a 16th century palazzo, and it’s now a hotel with 18 guestrooms – and every single room has a view of either the Grand Canal or the adjacent Rio San Polo. (For the ultimate in an upper class Venice experience, ask for a corner room so that you’ll overlook both waterways.) But despite this oh-so-Venetian view, when you step back into the hotel’s interior you’ll be transported to another place and time. 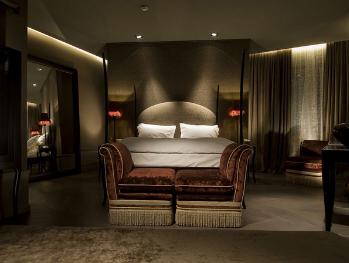 The decor in the hotel is decidedly modern without feeling stark or uninviting; in fact, the whole place has a dark and brooding atmosphere that makes it feel like the ideal place for a Venetian tryst (so if you opted to stay in the hotel for your entire trip, no one could really blame you). Should you want to take in the sights, however, Palazzo Barbarigo is nicely located – not only is it right on the Grand Canal, it’s also only a short walk to the Rialto Bridge.

A classic room at the hotel can range from €160-230 depending on the season, and you’ll get breakfast and WiFi included with the room. On weekends and during Carnival the hotel requires a minimum two-night stay. Over Christmas, New Year’s, and Easter, it’s a three-night minimum.

Venice isn’t the kind of city where new hotels are springing up all the time, given the limited real estate for expansion, but there are some unique hotels in the city that I hadn’t known about when I made my original list – so here are some updates.

original photo at the top from nd_architecture_library