Hotels in Milan Near the Duomo 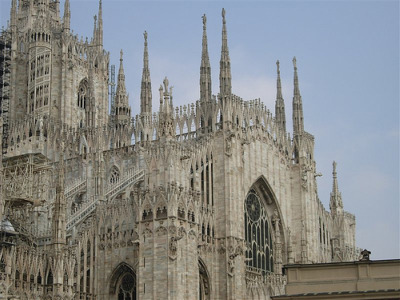 Let’s get one thing straight at the outset – hotels near the Milan Duomo aren’t going to come cheap. The Duomo, Milan’s enormous and ornately-decorated cathedral, is one of the top things to do in Milan. As such, it’s surrounded by things tourists are looking for – restaurants, souvenirs, and hotels. And none of those things, if they’re within spitting distance of a tourist attraction anywhere in the world, come cheap.
Having said that, Milan is also very much a business traveler’s city. Although you wouldn’t think business travelers would be looking for hotels right in the middle of what you’d think is the tourist center around the Duomo, that part of Milan is also home to many of the city’s big banks as well as the stock exchange. The bottom line is that there are hotels all over the place in the streets radiating out from Duomo Square.
Depending on when you’re planning your Milan trip, you could score a decent deal on even the 4-star business hotels near the Milan Duomo – this is especially true if you’re visiting on a weekend and the business travelers have left after a week of work. It’s worth looking, in any case, and if you’re in a position to splurge on a hotel room then there are few hotel room views more spectacular than ones that include an Italian cathedral.
The map below shows the hotels in the neighborhood right around the Duomo that are closest to the actual cathedral. You can find out more about each one by clicking on the map icons, or by scrolling down to read a brief description about them. And if you don’t find what you’re looking for on this list, just click on the map’s red star – indicating the Duomo itself – and select “Find Nearby Accommodations.” That will give you a new map with even more hotels in the area.

Milan Hotels Near the Duomo

Hotels Near the Duomo in Milan