La Scala in Milan: It’s Not Just for Opera Lovers 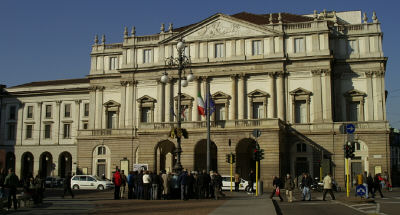 There are just about as many reasons to visit Italy as there are people who visit Italy, but there are some themes that will sound familiar if you ask people why they chose Italy as their vacation spot. There’s the art, the history, the scenery, the wine, the food, the fashion… But unless you’re a hard-core opera fanatic, you might not put opera sights in Italy on your must-see list – despite opera being something this country is famous for.

I’m going to suggest that even if you can’t stand opera, visiting Italy’s historic opera houses isn’t such a terrible idea – especially when you’re talking about an opera house as storied as La Scala in Milan, conveniently located a short stroll from Milan’s Duomo.

Milan’s Teatro alla Scala, known most commonly simply as La Scala, is not only one of Italy’s most famous venues for opera, it’s one of the most famous anywhere. And although getting tickets to a performance at La Scala can be a challenge (not to mention expensive), you can check out the La Scala Museum easily – and as a bonus, it comes with a peek inside one of the lush opera boxes in the theatre.

>> Skip ahead to read about visiting the La Scala Museum, seeing an opera at La Scala, how to get tickets to La Scala, and what to wear to a La Scala performance!

La Scala opened in 1778, but Milan hadn’t gone without an opera house prior to that. The city’s former opera theatre burned in a fire in 1776, and the new one was designed for and built on a new plot of land in Milan. That plot of land was already occupied, but that didn’t stop city officials from building a threatre there anyway. The building which used to stand where La Scala stands today was a church dedicated to Santa Maria della Scala, or Holy Mary of the Staircase, so in a nod to the church the theatre was given the name of Teatro alla Scala. The theatre you see today was renovated first in 1907, and then in the mid-1940s after it was damaged by World War II bombs.

Opera houses like to list the operas which premiered on their stage, and La Scala’s list of debuts is impressive by any standard. The composers who have chosen La Scala to debut their work includes names like Salieri, Rossini, Verdi, and Puccini – some of the most famous Italian composers. In fact, many times these composers would not only write the opera being performed but also act as the orchestra’s conductor for premiere performances. 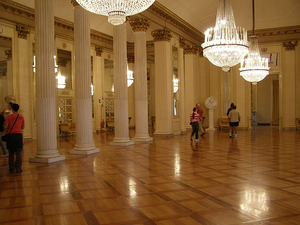 All of this history – as well as a larger history of Italian opera and theatre – is contained in the La Scala Museum, or Museo Teatrale alla Scala, contained in part of the opera house itself. While much of what’s on display is either not well-marked in English or perhaps only interesting to serious opera fanatics, some of the museum’s collection is interesting to anyone who is drawn to theatre in any form. You’ll see opera costumes, portraits and busts of famous opera singers, original set design pieces, and several historic musical instruments.

The best part of a tour of the La Scala Museum, however, comes near the end when you get to pass through one of the theatre’s fancy foyers into the theatre itself. As long as there isn’t a dress rehearsal or some other thing going on on the stage, you’re directed into one of the theatre boxes opposite the stage.

If you’ve never seen the inside of an old-fashioned opera theatre, the interior of La Scala might make you feel like you’ve stepped back in time. It’s all red velvet and ornate gold decorations, and the walls aren’t walls but are row upon row of private boxes. You can absolutely imagine the well-to-do in their finery taking in an opera (and using their opera glasses to check out what the other patrons are wearing, too). It’s such a cool experience to be standing in one of those boxes, even for a few minutes, that I’d say it’s almost worth the price of admission. Of course, that’ll depend on your budget, but the theatre-box look definitely gets a thumbs-up from me. 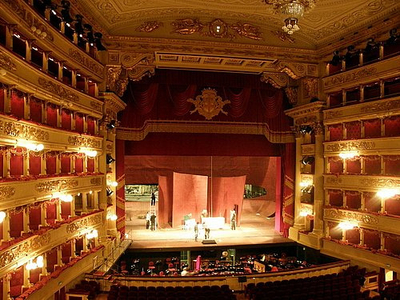 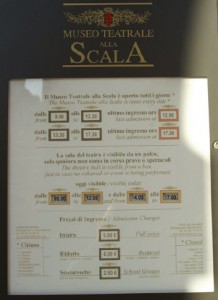 The photo above is of the sign in front of the museum entrance where you can find out not only the museum hours, but also whether the theatre itself is going to be viewable during a museum tour. Midway down the sign, you’ll see there are slots for times which can be changed if the theatre is in use. The sign is in both Italian and English.

Tickets to the La Scala Museum cost €5 for adults or €4 per person for a group. A museum guidebook costs €10 and is available in 6 languages.

Seeing an Opera at La Scala 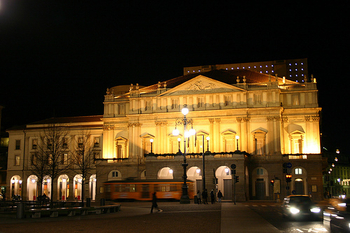 Like any other opera house, La Scala has a seasonal schedule. Opening day is always on December 7th, which is St. Ambrose’s Day – he is Milan’s patron saint, so this is a big annual holiday in the city when most businesses and schools are closed.

As noted earlier, tickets to a performance at La Scala don’t usually come cheap – although there is a “gallery” section above all the luxury theatre boxes called the “loggione.” This is traditionally where the less-wealthy would sit in a sort of general admission area, but it’s not the only area where you’ll find cheaper seats these days. Unfortunately, the traditional design of opera houses like La Scala doesn’t make an effort to give every ticket-holder a comfortable seat, a good view, or even a decent spot to hear what’s going on – so although you’ll find some less expensive seats even in some of the boxes, it’s not safe to assume you’re getting a steal of a deal.

Each theatre box at La Scala has 4-6 seats and stools in it, but generally speaking it’s only the front two which have a view of the stage (and even some of the front seats in boxes next to the stage don’t really have a good view). Seats from which you can’t see aren’t apologized for, however – they’re considered “listening” seats, where you’re going to hear the show but not really see it. I don’t know about you, but if all I’m doing is listening to the opera, I think I’d prefer to stay at home and put on the CD.

Getting Tickets to La Scala Theatre 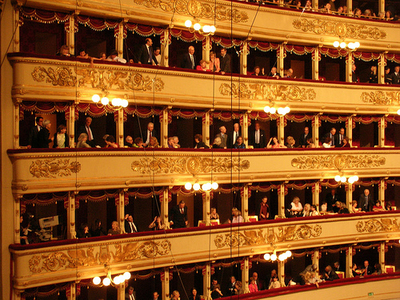 You can buy tickets to La Scala operas right from the theatre’s official website, and if you’re not able to buy tickets from the theatre in person this is probably your next-best option. There are several other online ticket sellers, but they all charge a hefty markup fee. Of course, if you dilly-dally at all and the tickets to the show you want to see are sold out (many shows sell out incredibly fast), one of those other sellers might be your only option. Some people report having occasional problems even with the official La Scala website unless they’re using an Italian credit card, but these problems appear to be atypical.

As soon as you know your travels will take you to Milan, you’ll want to check La Scala’s season calendar and – equally as important – its sales calendar. There are specific dates and times noted for when tickets for each show go on sale, and waiting even five minutes beyond that start time can mean the difference between a good and bad seat, or (even worse) getting a ticket or not.

If you’re hoping to buy tickets in person from the box office in Milan, you’ve got a few options. There’s the main La Scala box office at the theatre itself, but this only opens two hours before the start of a performance and you can only buy tickets for that evening’s performance at that ticket window. There’s another box office nearby in the Piazza del Duomo Metro station in the Galleria del Sagrato. It’s open daily from noon until 18:00, although it’s closed during the summer (between July 26-August 31). Don’t worry, the opera’s on vacation then, anyway.

Do note that there are other performances at La Scala besides operas, and if you’re either not a big opera fan or just want to experience being part of a gala evening at La Scala no matter what’s on stage you may have more luck getting tickets. It’s the operas that routinely sell out the fastest. 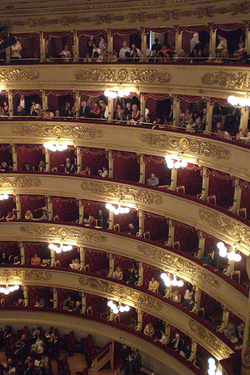 Okay, so you didn’t buy tickets the nanosecond they were released online, and you don’t have a trust fund with which to buy tickets from an online reseller at a crazy markup. Does that mean you’re out of luck when it comes to seeing a performance at La Scala? Not necessarily. Here are your options for buying last minute tickets to La Scala:

There are also some discounts available for certain theatre-goers, including kids and seniors, which may be of interest to you. You can find out more about each discount program on the official website. Do note that the official La Scala website says that children under the age of 6 aren’t permitted in the theatre on regular performance nights, so if you’ve got little kids with you you’ll need to attend one of the “family” nights.

What to Wear to La Scala 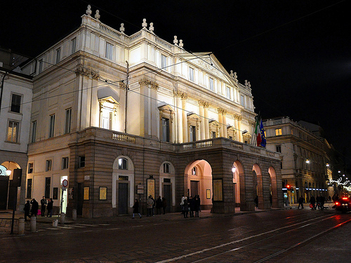 It’s probably not surprising that an opera house of the caliber of La Scala has something of a dress code. The theatre website says, “Gentlemen are kindly requested to wear evening dress for premieres. Gentlemen are in any case required to wear a jacket and tie at all performances. Items of clothing which do not comply with a proper theatre decorum shall not be accepted.” So while women’s attire isn’t specifically addressed, if you know that the guys are going to have to wear a coat and tie to all shows and “evening dress” for premieres, that means you can probably figure out what the ladies will need to wear!

My friend Sara was lucky enough to see a recital at La Scala a couple years ago, and she took this quick video during the ovation at the end. It definitely gives you a sense of how majestic the inside of the theatre is, and how special a night at La Scala would be.

You can read more about Sara’s experience at La Scala, too.

How to Get to La Scala in Milan

Getting to La Scala is easy once you’re in Milan, because it’s right in the city center and only a few steps from one of Milan’s most famous attractions, the Duomo. You can take the Milan Metro to either the Duomo or Cordusio stations if you’re on the red line (line 1), or the Duomo or Montenapoleone stations if you’re on the yellow line (line 3). To get there by bus, take line 61 to the Verdi/via dell’Orso stop. Via tram, you can take either line 1 or line 2 to the Manzoni/Scala stop.