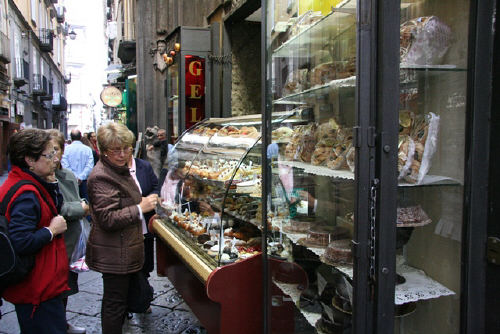 Spaccanapoli. It’s a head-scratcher, really. Certainly some modern-day planner bulldozed a path right through the Naples city center? At least that’s what my befuddled brain came up with after experiencing the shocking ease of traversing the straight-as-a-Roman-arrow pathway shooting forth from Piazza del Gesú.

However, no modern-day Neapolitan is responsible for Spaccanapoli, which literally means “split Naples.” For this, the credit goes to the ancient Greeks and Romans. These early settlers thoughtfully put in place a city plan with three parallel decumani (main streets), the most famous of which was the decumanus inferior, Spaccanapoli’s forerunner. In reality though, Spaccanapoli is not one street at all but the nickname given to the sequence of streets (Via Benedetto Croce, Via San Biagio dei Librai and Via Vicaria Vecchia) that cut through the heart of the city’s historical center, essentially splitting Naples in two (hence the name). 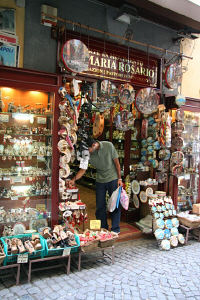 A Spaccanapoli itinerary slices through a working-class neighborhood of full-blooded-live-out-loud Napolitani. Here high-energy street drama plays out in public among the piazzas, palazzos, churches, galleries, bars, and street vendors. Famous sites along the way include the imposing the church of Gesú Nuovo and the gothic Santa Chiara church and majolica-tiled Cloister. Detours take in the Cappella Sansevero (famous for housing the marble statue, Veiled Christ) and the Duomo, the Naples cathedral. 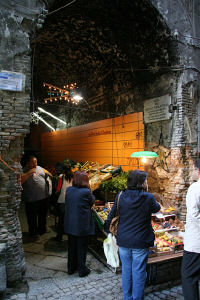 At only 6 meters wide, the narrow street can get tight and even fruit vendors are forced to take refuge in unlikely spots. Fair warning: You may want to pass on any apples purchased from the vendor tucked-in at Vico del fico al Purgatorio!