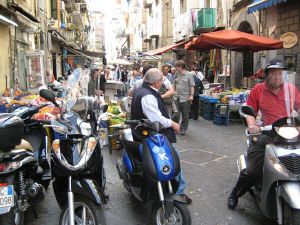 It’s a given you love Italy. The food, the wine, the people – not to mention the culture, history, and art – make it one of the most desirable vacation spots in the world. And although Northerners scoff there is nothing south of Rome, in all the ways we love Italy the southern capital of Naples holds its own and then some.

Bella Napoli may seem a more apt sentiment for an era long since passed, but the aging beauty hasn’t completely succumbed to the ravages of history, politics, and crime. Less than two hours from Rome, this port city founded by the Greeks (Neapolis) and expanded by the Romans will be unlike any other Italian city you have visited thus far. Here, life takes place at full throttle. Mini-operettas take place on every street corner, while flashing Vespas scoot across pedestrian piazzas. Small, narrow streets hung thick with laundry are covered in exhaust pouring from a passing bus. You may wonder how clothes in Naples ever come clean. 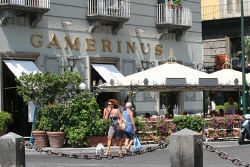 An aperitivo taken at Café Gambrinus, the city’s oldest and most elegant café will almost certainly restore your faith. Set on the corner of the Piazza del Plebiscito, the café is in a fine position for the leisurely pursuit of people watching, or for those with an agenda, it is an excellent starting point for exploring the city. But fair warning, drinks on the terrace will cost you!

>> And if you’re curious about Naples but not sure you want to brave it alone – or if you just want to make your stay as efficient as possible – then hiring a Naples tour guide is always a good idea. I spent an afternoon with one passionate Naples tour guide, who I’d recommend to readers.

Where to Stay in Naples

Naples is a big and sprawling city, and there are plenty of areas of the city that have hotels and hostels – but it’s also a city that can be a shock to the senses, so unless you’re really familiar with Naples and know how to get around I’d suggest sticking to the historic center for your accommodation options.

If you’re traveling on a budget, you’ll notice that many of the cheaper places to stay are located right around the square in front of the main train station. It’s true that this area is convenient if you’ve got an early train to your next destination the next morning, but I’d still advise against staying around the station if you can avoid it. The true historic center has enough hotels and hostels that are reasonably-priced to make it a better choice for most travelers, in my opinion.

Here are some links to help you find a place to stay in Naples.

What To Do In Naples

From volcanoes to pizza, Naples truly offers a little something for everyone. The historic center can be crowded and chaotic, but the local color is what you came for. Soak it all in with a stroll down Spaccanapoli (literally ‘split Naples’ because it cuts the city in half). In the end, you might be surprised at just how tourist friendly Naples can be.

>> You can always hire a guide to show you around, as well – I spent some time with this Naples tour guide, and recommend her.

What To Do Around Naples

Even the most die-hard Naples fans might need a break from the city after a couple days, and thankfully there are plenty of places around Naples that are perfect for day trips.

For additional Tourist Information from the Azienda Autonoma Soggiorno Cura e Turismo di Napoli visit the web site www.inaples.it. Download a free copy of Qui Napoli, the most complete guide to current events in Naples. Visitors in Naples can pick up complimentary copies at local tourist offices throughout the city.

The author of this page, Karen Landes, spent two years exploring Sicily. Read more about her island discoveries in her new book, “In Etna’s Shadow: Culinary Adventures from Eastern Sicily.” Today she and her family live outside of Naples, Italy. She can be found online at www.inetnasshadow.com and www.southofrome.com.