Chewing on the Heel: The Mediterranean Diet in Southern Italy

For many travelers in Italy, the food is one of the attractions. In fact, the so-called “Mediterranean Diet” is enough of an attraction that it’s on UNESCO’s list of World Heritage Sites. Today’s guest post by Mattie Bamman explores the Mediterranean Diet through the lens of a long Sunday lunch in Puglia.

In southern Italy’s small towns, the bars are busiest between five and six in the morning, but it’s not ballers and disco queens who’ve been rocking out all night. It’s the farmers. They grab beers on their way to work. They park their tractors outside and stand at the bar with sleepy eyes, dirt-caked jeans, and scruffy jaws, ordering Drehers and Peronis along with espressi and pastries. Not much talking takes place.
The pastry and espresso are first to disappear. The full beer sits on the counter next to the white espresso cup stained with coffee grounds. The sun begins to break the horizon, and if you don’t pay attention, you’ll miss it: the beer is gone in one gulp.
Beer and wine are drunk hastily down here, where the Mediterranean diet has flourished for centuries. They are also drunk in moderation. As we all know or will be happy to learn, the Mediterranean diet includes a daily allotment of wine. Not long ago, wine was cheaper than bread, and at lunchtime, poverty-stricken farmers refueled with sweet, high-alcohol wine. While drinking on weekdays continues to be a quick, practical affair, Sunday is another story.
Which brings me to one of the cardinal rules when traveling in Italy: Never turn down a chance to join Sunday dinner. Never.

The Origin of the Mediterranean Diet

In 1958, Ancel Keys, the man responsible for K rations during WWII, began the research that led to the discovery of the Mediterranean diet. He was based out of the town of Pioppi, a small town just south of the Amalfi Coast. His study, known as the Seven Countries study, was ambitious: it involved comparing the diets and life spans of 12,000 middle-aged men from Italy, the Greek Islands, Yugoslavia, the Netherlands, Finland, Japan, and the United States. Keys learned the difference between healthy fats and saturated and trans fats (he famously noted that Finns spread butter on their cheese), and discovered that men from Crete had the lowest number of heart attacks. This led Keys’s successor to conclude that heart attacks are “not a natural aging phenomenon.”
Olive oil – produced and consumed in great quantities in southern Italy – is a fat, and Keys was surprised to find that southern Italians and Cretans incorporated nearly as much fat in their diets as less healthy societies. He connected fat with clogged arteries, so what was the difference? It turns out that many of the vitamins in vegetables need fat in order to be absorbed into the body. Olive oil is a passenger train that transports vitamins from the food to your body. Bad fats absorb vitamins, but they also raise cholesterol levels. In other words, the train gets stuck in the station.
The Mediterranean diet was added to the UNESCO World Heritage list at the end of 2010, causing a renewed interest in its origins – namely southern Italy and Crete. The Mediterranean Diet Pyramid highlights fruits, vegetables, and olive oil (I was traveling in Puglia, which produces 30-50% of Italy’s olive oil), and while I’m not much for diets, the experience of eating in southern Italy made me feel good.

You Never Grow Old at the Dinner Table

I got a taste of immortality when I met Francesca Caliolo. “Invitare qualcuno a maccheroni e carne” is an Italian saying that means to invite someone to experience the best and the most that a household has to offer. Francesca invited my girlfriend, Kristin, and me to Sunday dinner at her house in the countryside. 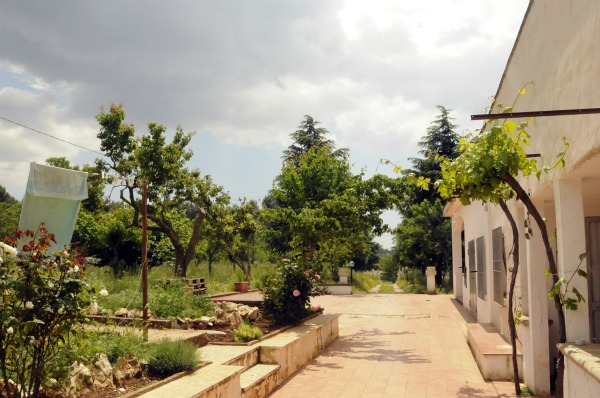 Around noon on Sunday, her son, Gabriele, picked us up. “Ciao, compá,” he greeted me, dialect for dude. Their country house was located just a few miles outside of the city, but it felt as though we’d been taken to another world. Pulling through the iron gate, I saw that the house was surrounded by olive and citrus trees and blooming roses. Francesca’s kitchen smelled wonderful, a combination of rosemary and things roasting. The table was beside the door so that we could feel the sea breeze. Francesca and her children were taking private English lessons, and conversation flowed in English, though from time to time Roberta, her daughter, exclaimed in Italian at the effort involved.

The meal started off with what Francesca called a light antipasto: plates of sliced raw fennel and bulbs of asparagus chicory (aka radichetta), zucchini involtini stuffed with tuna, polpettini fritti (fried mini meatballs, a specialty of Puglia), freshly baked bread, and ricotta forte (an aged, spreadable ricotta so strong it reminded me of horseradish), to be spread on crostini.
The asparagus chicory was new to me. It was a bulb rather than a leafy green, with alien-like tentacles, and it had a pleasant bitterness and a texture similar to celery. These antipasti were succeeded by pepperoni con pangrattato (peppers with breadcrumbs) and cozze con pangrattato (mussels with breadcrumbs). The first dish’s texture was melt-in-your-mouth, and the peppers had the most strikingly bright flavor. The mussels were served on the half shell in shallow puddles of olive oil – it was messy fun to slurp them up. The heavy pours of extra virgin olive oil boasted the quality and abundance of this most essential cooking ingredient.
The antipasti underscored just how different the vegetables taste in Puglia – almost overrun with flavor. Whether it’s the sun, the sea, the wind, or the soil, vegetables grown in Puglia are the best I’ve ever had. 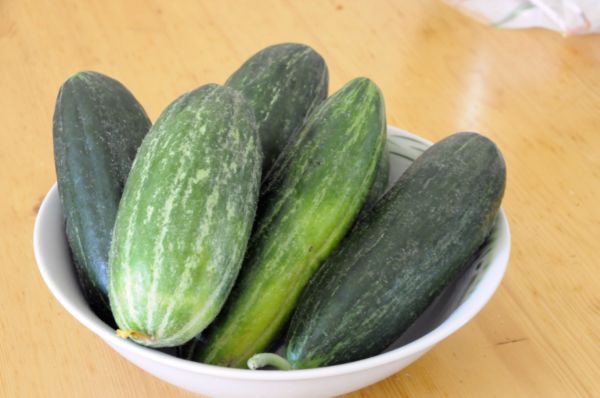 Two of Puglia’s vegetables are somewhat famous, the barattiere and lampascioni. Barattiere is a type of cucumber that cannot be found anywhere else on earth. It looks like a bloated cucumber with some of the markings of a watermelon and tastes like a cross between a melon and a cucumber. Its seeds are very tough, but it’s good chopped up in a salad. 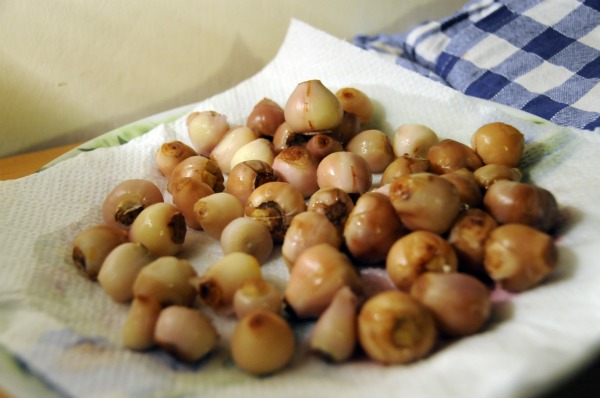 Lampascioni are bulbs of the tassel hyacinth, and for many Pugliese they are the quintessential taste of home. If you mention lampascioni to someone born in Puglia, especially if they’ve since moved to northern Italy or abroad, more often than not their eyes glimmer, a smile breaks out, and they say something like, “There’s nothing better on earth.” From the perspective of a foreigner, it boggles the mind that anyone would dig them out of the ground and eat them. Lampascioni look like miniature onions but taste completely different. When I tried to prepare them, they oozed with a sticky goo, and when I bit into them they popped and the goo filled my mouth. The fact that they somewhat resemble eyeballs didn’t help. But in theory, pickled or battered and deep fried, they taste delicious. Just try them in a restaurant before tackling the task of preparing them yourself.
Vegetables like the lampascioni are an icon of Puglia’s version of cucina povera – a style of cooking that helped give rise to the Mediterranean diet. Cucina povera has a meaning akin to “meals created or inspired by the limitations of poverty.” Keys was first drawn to southern Italy because its inhabitants were healthy, yet they were near starvation for a significant portion of each year. The term cucina povera is used throughout Italy and is certainly applicable to countries around the globe. In Puglia, the practice creates a stripped down cuisine that strives to use every ingredient on hand, while still trying to use as little of each as possible. For example, pastas in Puglia, including the famous orecchiette, are made without eggs.

Francesca served risotto con zucca e pancetta for the primo (first course). The squash had completely disintegrated, coloring the risotto orange, and the cheese and pancetta in the dish made it quite rich. At this point, I looked around the table to see what everyone was doing. Were they eating their whole portions? Were they slowing down? Gabriele had taken it all like a true champ, though I did notice he’d shirked the vegetables during the antipasto. Roberta and Francesca, though, had left portions of their risotto on their plates. Thankfully, leaving a little on the plate was allowed. I finished mine anyway.

The secondo was baked calamari – the tubular part stuffed with mussels, calamari tentacles, herbs, and who knows what else. This dish was one hundred percent sea. 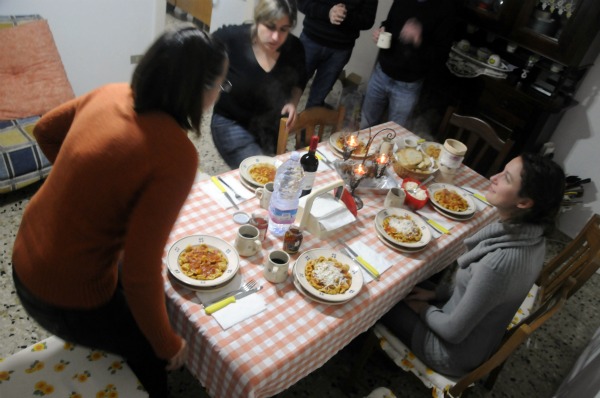 I didn’t think I could eat any more, but Gabriele laughed and told me to find my second stomach. Somehow the suggestion helped, and when a big bowl of prawns was set before me, I managed to slowly peel the shells and eat.
Cooked in tomato broth with oregano and served five to a bowl, the prawns were as red as lobsters and seemed half as big. Getting off the shells was a messy business, but I was glad to exert the effort, which gave me time to digest and maybe even burn a few calories. Thankfully, my second stomach had opened.

The fruit course was next: heaping platters of pineapple, melon, and grapes. It gave me a chance to breathe, the sweet juice of the fruits slowly cooling the fire in my stomach. Frutta is an essential course for any big meal in Italy – as well as for the Mediterranean diet.
For dessert, Francesca had made a berry tart with almond paste. The crust was pasta frolla, one of Italy’s most important contributions to the world of pastry. Pasta frolla is very malleable when made right, and I’ve seen chefs stretch it like pizza. Francesca’s tart had a thin, crunchy crust that was topped with a layer of creamy almond paste, then a layer of fruit preserve, and it had one fresh strawberry in the middle. We decided to give ourselves a break, though, and sat outside on the patio to recoup.
Francesca served espressi and homemade limoncello. Kristin and Roberta shared the hammock and everyone worked hard to stay awake – unsuccessfully. Gabriele disappeared inside. I let the scents from Francesca’s kitchen mingle with those of the Italian countryside, and fell asleep in my chair.

You don’t have to be invited to Sunday dinner to eat this way. Puglia’s restaurants are inexpensive – a liter of local house wine runs €5-10 and a normal antipasto della casa, which is sometimes the size of a two-course meal, costs between €10-15. 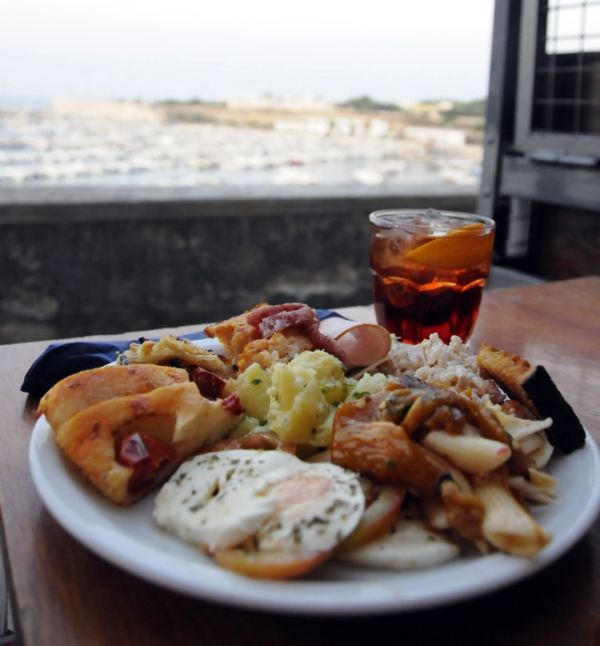 The antipasto variety is a smorgasbord of the region’s best dishes – mozzarella stuffed with ricotta, deep-fried anchovies that you eat whole, ceviche-style octopus, and a host of vegetable dishes that feature the flavorful bounty of the Mediterranean.
If you are a vegetarian or pescatarian – or if you just like local vegetables and fresh seafood – Puglia is especially rewarding.

About the Author:
Mattie John Bamman has written for Northstar Travel Media, LLC, EuropeUpClose.com, i-Italy Magazine, The Believer, Total Tattoo, and Skin& Ink, and his articles have been picked up by the Chicago Sun Times, Reuters, and USA Today
He’s writing a book on wine tasting in Puglia, Italy, and you can follow along
with his blog, bythetun.blogspot.com.
all photos provided by Mattie John Bamman and may not be used without permission