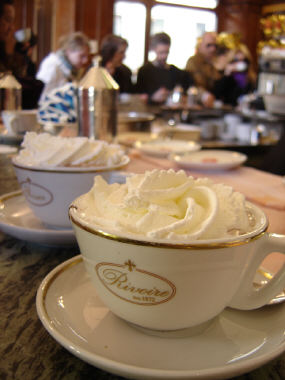 I’m a big fan of Italian gelato, and highly recommend consuming vast quantities of it while on your Italian vacation. But what if you’re visiting during the winter, or anytime the Italy weather gives you a chill? Then that’s the perfect excuse to indulge in another favorite Italian treat – hot chocolate, known in Italy as cioccolata calda.

For those of you who think of a powdered and microwaveable mix when you hear the words “hot chocolate,” let me begin by saying you’ll need to put that watery concoction out of your mind completely when preparing for cioccolata calda (pronounced cho-ko-LAH-tah KAHL-dah). True Italian hot chocolate is closer to the pudding end of the spectrum, some of it being so thick that a lightweight spoon will take awhile to fall from an upright position to rest on the edge of the cup. This stuff is almost as much a meal as it is a beverage.

>> Not in the mood for hot chocolate? Then check out the other offerings on this list of Italian coffee drinks.

Now, as much as I’d like to say that the Italians have a corner on the hot chocolate market, I have to admit that you can find good hot chocolate in many European countries – it’s sometimes even referred to as “European drinking chocolate.” The Italian version is common in bars and cafes throughout the country, although there are some places which are noteworthy for the way they do their Italian hot chocolate.

By far the best Italian drinking chocolate I’ve ever had was in Florence, in a cafe right on the Piazza della Signoria. Ordinarily, I try to steer clear of restaurants that are right on famous and popular piazzas, because the prices tend to be way too high and the quality tends to be way too low. But Rivoire is an exception (at least on the quality end, if not the price) that I’d happily indulge in again and again. It’s quite well-known for its chocolate desserts and sweet concoctions, and with a location directly opposite the Palazzo Vecchio you can’t go wrong in the romance department on a warm night with an outdoor table. The problem is that the prices are already astronomical, and if you sit (rather than stand at the bar inside) you’ll pay even more. So when I go, I stand. It’s still worth it. One word of advice – the Rivoire cioccolata calda is so incredibly rich that you’ll probably want a big bottle of water handy when you’re done with it.

This list of some of the best eating experiences in Europe lists a place in Venice as that author’s favorite cioccolata calda, but she readily admits that part of her affection for that particular cup of hot chocolate is that it was the first hot chocolate she ever tried in Italy. But even without that emotional attachment, I can fully understand how Venice would be the ideal place to swoon over Italian hot chocolate – the city is so often shrouded in fog, that a cup of dense, hot, drinkable chocolate would sound much more appealing than a cone of dripping gelato.

So, no matter where you go on your Italy trip, if you find yourself shivering a bit one morning, pop into a corner bar or cafe and order a cioccolata calda. It’ll warm you right up. And, if you’re feeling particularly indulgent, order it “con panna” – with cream. By that point, you won’t even need to eat anything else. After all, calories don’t count when you’re on vacation, right?

>> For a video introduction on how to make your own cioccolata calda at home, check out this post on Italy Magazine!