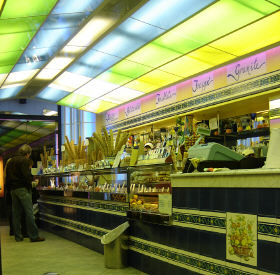 I’ve written in the past about arguably the most famous gelato shop in Florence, Vivoli – I felt it was my duty to you, my dear readers, to investigate whether Vivoli lived up to its reputation. You may remember that while the gelato itself is perfectly fine, it left me wanting more (specifically, I was wanting more gelato than the meager portions they dole out!). So I thought for this Tour del Gelato outing we’d head to one of my favorite gelaterie in Florence – Festival del Gelato.

Now, generally speaking, if you find a gelato shop with a big neon sign that’s a few short steps off of one of the busiest tourist thoroughfares in any Italian city, your best bet is probably to keep walking. But Festival del Gelato is different. It’s so close to the Via dei Calzaiuoli (the long primarily pedestrian street that connects the Duomo with the Piazza della Signoria) that you’ll notice it as you’re strolling by, if not by the gaggle of happy customers out front than by the giant flavor list out front that’s surrounded by neon. It’s hard to miss. And in this case, that’s a good thing – because the gelato is fabulous.

I first tasted Festival del Gelato’s wares in 2001 after reading about the shop in a Rick Steves guidebook, but I’ve since seen it listed in several other travel books and websites – including Frommer’s, Virtual Tourist and The Guardian Online. What I’m trying to say is that this isn’t an out-of-the-way spot you’ll feel like you’re discovering, or a place you’ll want to keep a secret so you’ll have it all to yourself. The word is out already.

So – with that out of the way, shall we talk about the gelato at Festival del Gelato? Yes. Yes, we should. 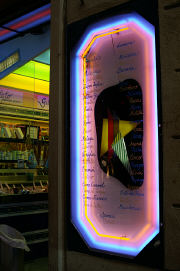 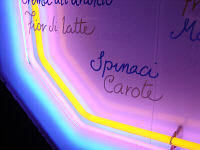 L-R: The neon flavor sign out front, & a close-up of the sign. (At the bottom of the flavor list – which never seems to change, and doesn’t seem to actually reflect what’s going on inside the gelato cases – the flavors of “spinach” and “carrot” have been on the sign for years. I’ve never seen either flavor on offer, though I’d happily try either – or both! – if I did.)

The neon sign outside should give you an indication of the kind of shop this is – it’s bright, flashy, a bit over-the-top, and often noisy. The gelato case seems to go on forever, and some of the gelato flavors have weird names and even weirder things piled on top of them. If it’s a candy-bar flavor, they’ll have stuck that candy bar in the tub of gelato in the case. If it’s a fruit, there’ll be some artful display of said fruit on top of the gelato. 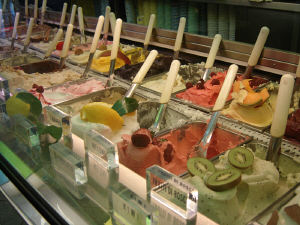 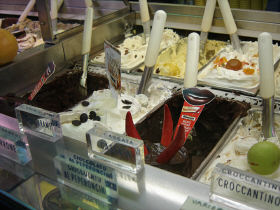 So, one of the great things about Festival del Gelato is that because there are so many flavors – and the flavors are often so well-defined by the “props,” if you will – that it’s like ordering gelato with training wheels. You can test out how well you know your Italian gelato flavor names by matching the words on the flavor cards with the goodies on top of the gelato itself.

Another excellent thing about this gelateria is something that’s new since my first 2001 visit – they now have vegan-friendly gelato! Yes, Festival del Gelato has jumped on the food allergy and restrictive diet bandwagon (most of Italy hasn’t, so keep that in mind), and you can choose from a select few flavors that are made with rice milk and are entirely vegan. How cool is that? 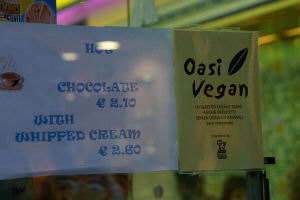 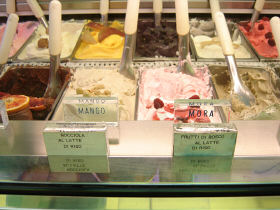 TOP: The sign out front declares Festival del Gelato a “Vegan Oasis!” BOTTOM: The paper stuck on the clear flavor signs says these are made with “latte di riso,” or rice milk – these are some of the vegan options.

Like many gelaterie, Festival del Gelato does more than just gelato. They also have some semifreddo flavors on offer as well as other frozen treats, but to be perfectly honest I’ve never ordered anything there that wasn’t gelato. I just can’t bring myself to do it. It always feels like there are too few nooks & crannies in my stomach, and if I fill them with some non-gelato substance then there’s less real estate for Festival del Gelato. And that’s not something I can permit. 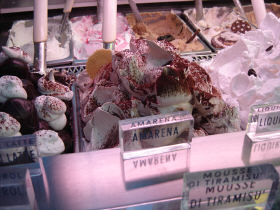 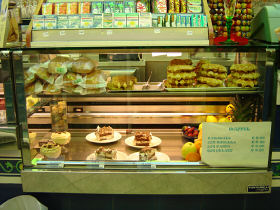 TOP: The ones that look like whipped cream, that look more fluffy than the rest of the gelato – those are the semifreddo flavors. BOTTOM: And then there’s that other case of non-gelato desserts. I took that picture, and I have no recollection of that entire case.

So, because it was my introduction to what fine Italian gelato really is back in 2001, and because it’s continued to churn out top-notch gelato despite its increasing fame, I have to say that while there may be gelaterie that are technically better than this one in the birthplace of the Renaissance, Festival del Gelato is still my sentimental favorite gelato shop in Florence.

Gelateria: Festival del Gelato
Location: Via del Corso 75r (literally, a few steps off Via dei Calzaiuoli)
Open: Tuesday-Sunday, 08:00-01:00 (summer) & 11:00-01:00 (winter)
More Information: No website, but phone is +39 055 239 4386
Good to Know: During the summer, this place gets abso-friggin-lutely jam-packed. There are tables inside along the right-hand wall, but they’re almost always full in the high season. The last time I visited, in March, the shop was doing a brisk business but the tables were all empty. But even if you can’t get a table, this isn’t actually a bad thing – the Piazza Repubblica and Piazza della Signoria aren’t far away and make for much better ambience.
Go or No? YES! GO! NOW!

I found this photo of the Festival del Gelato shop on Flickr, and I love it – you can really see the crazy colorful nature of the shop, and some of the neon. Awesome.

Be sure to study these Italian gelato flavors, read my guide to good gelato in Italy, learn how to order gelato, and remember to check out the other stops along the Tour del Gelato – you can easily eat your way through Italy on gelato alone, so why not give it a try?