What to Eat in Umbria: Food for Every Season

You know by now that one of the things I love most about Italy is eating there – so when I started talking with Rebecca Winke, an expat living in Umbria, about the foods that Umbria is famous for I knew right away that I wanted her to contribute a guest post to WhyGo Italy on the subject. After all, it didn’t seem fair to have me be the only one drooling over Umbrian cuisine. Rebecca’s provided all the tips you’ll need to get the seasonal specialties of Umbria, no matter when you visit!
There are many reasons people travel. Some follow the crowds, some the sun. Some follow the bargains, some their bliss. I follow my fork.
I love to eat, and much of my trip planning revolves around researching local cuisine, food festivals, and restaurants. With so much travel information online — virtual museum tours, snapshots of monuments on Flickr, YouTube videos of folk festivals and sunsets — it sometimes feels as if you needn’t bother leaving your computer screen to circle the globe. But nothing can substitute your first macaron in Paris, your first rib in Louisiana, or your first mango in Bali. In one bite, you taste the land’s history, culture, and people: a sense of discovery far beyond any documentary.
The central Italian region of Umbria is all about food. The simple, no frills, country cooking is testimony to its rural history and access to such quality local ingredients that no elaborate recipes are needed. Here is a guide to just a few of the foods you shouldn’t miss when visiting Italy’s “green heart”, no matter which season you travel. 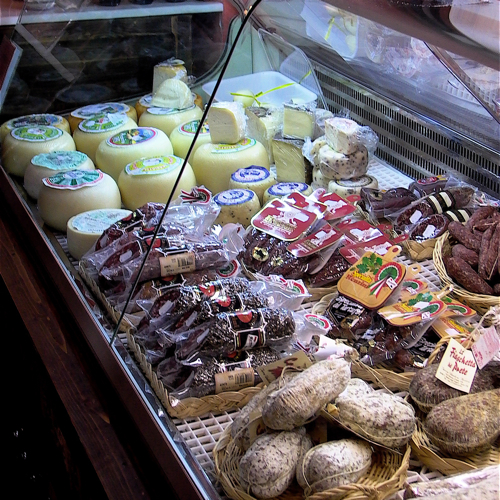 Affettati (cold cuts):
Umbria is the Iowa of Italy, as far as hog raising goes. Centuries of small scale, modest family farming mean that historically the staple meat of the Umbrian diet was not beef but pork, and drying and curing it into an amazing array of salame, prosciutto, dried sausage, and pancetta is a regional artform. Most rural families butcher their own pig during the winter, and by spring are shaving off paper-thin slices of salty prosciutto or chunks of peppery corallina. For a detailed overview, read Umbrian Pork – Salt, Pepper and Time …then head to Norcia to try some for yourself!
Wild asparagus:
The poor rural families in the Umbrian mountains have long supplemented their diets with the forest’s bounty, and the tradition of foraging for all the hills have to offer continues today. In the summer, hands are stained purple from blackberries. The fall and winter bring out the hardy mushroomers. And in the spring, you will find cars parked along the country roads as the locals head to the woods to roust out the wily wild asparagus. You can find bunches on sale at the local markets, and its sharp flavor makes a perfect foil to a plate of fresh tagliatelle (egg noodles). You can see some foraging in action at Extreme sports in Umbria: Wild asparagus. 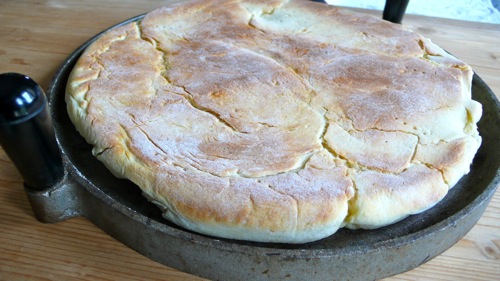 Porchetta:
Summer is the season of street food, and as we’ve already established that pork is to Umbria what politicians are to DC and red light districts are to Amsterdam, the quintessential street food in this region is a towering roast pork sandwich. This crispy yet moist, lean yet fatty, mild yet savory delicacy is a whole pig deboned, then stuffed with garlic, rosemary, fennel, and a variety of other wild herbs and cooked on a spit over a wood fire. Porchettai (vendors) can be found in piazzas across Umbria, pitching their mouthwatering sandwiches from white vans. To order the perfect porchetta sandwich, see here.
Torta al Testo:
Summer is also the season of the ubiquitous sagra. These local food festivals are usually organized around a central ingredient or dish — the roast goose sagra, the porcini sagra, the polenta sagra — but every menu also includes the cornerstone of country Umbrian cooking: torta al testo. Torta al testo is a flatbread (torta) cooked on a round metal or stone griddle (testo) which was traditionally set over the coals. It is usually served stuffed with grilled sausages, prosciutto, cooked greens, or soft cheese and arugula…or plain, as a substitute for bread with a meat course. It can also be found at some bakeries, but be sure you warm it up before digging in! If you fall in love with torta al testo and want to try making it at home, you can find a recipe here. 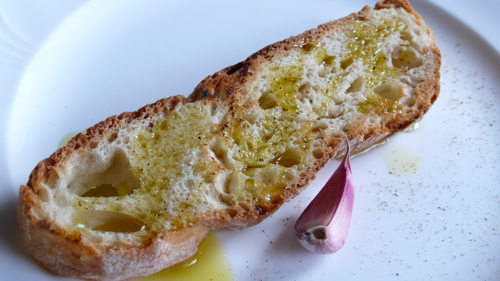 Wine:
Fall brings two of the staples of Umbrian cuisine, the first of these is wine. From September through the end of October, local wineries harvest their grapes fom the rolling vineyard covered hills, and brew up some of Italy’s best vino. Montefalco’s fullbodied red (Sagrantino) and crisp whites from Orvieto and Torgiano are appreciated by wine aficionados the world over, and it’s fascinating to visit the boutique local vintners and taste their wines at the source. Try La Strada del Sagantino’s informative website to help you plan a single visit, or a daylong jaunt through Umbria’s fetching wine country.
Extra Virgin Olive Oil:
Just as the vendemmia, or grape harvest, wraps up, the olive harvest begins. On hillsides across Umbria, olive groves are swarming with pickers on wooden ladders, tossing handfulls of the green-black fruit into their baskets or onto the nets they’ve spread on the ground under the twisted tree trunks. During the months of November and December, small towns in the oil producing area host Frantoi Aperti when visitors can visit the olive oil mills, taste the peppery new oil, and participate in dinners with autumn fare and live jazz or classical concerts. 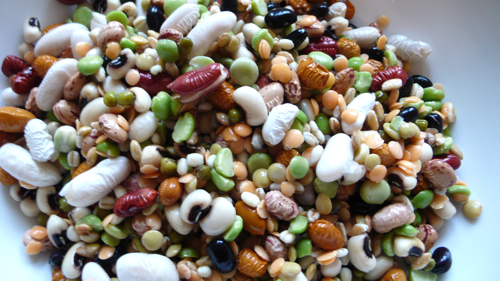 Truffles:
The most precious of the world’s prized tuber — the white truffle — is a winter treasure. These humble-looking, warty fungi are found all year round, but black summer truffles are less aromatic than their delicate cream-colored cousins. Grated over pasta, ground in sauces and patès, or simply used to flavor a light frittata or mild cheese, truffles are a central feature on winter menus across Umbria. That said, their relative rarity (they are only found in a few places on earth) and the fact that they grow under the leaf-covered forest floor and can only be detected with the olfactory prowess of trained dogs means that, by weight, they are one of the most expensive foods around. There are three main truffle fairs in Umbria every winter – Città di Castello, Valtopina, and Norcia — where you can sample truffle products from across the region.
Legumes:
If truffles represent the haute cuisine of the region, legumes are testimony instead to its poor rural history. But on a cold, blustery winter night, I’ll take a steaming bowl of creamy bean soup topped with a dribble of fresh olive oil and some crusty bread any day. Umbria has a variety of heirloom legumes which are indigenous to this region and worth seeking out: Lake Trasimeno’s mild fagiolino (a eyeless type of black-eyed pea), Monteleone’s farro, or spelt (actually a grain, but usually served in legume soups), Cave di Foligno’s extremely rare fagiolo (a green or yellow variety of the navy bean), or the more easily found earthy cicerchie (a cousin to the chickpea). If you happen to be spending New Year’s Eve in Umbria, make sure you put down a generous portion of Castelluccio’s tiny, peppery lentils…each coin-shaped bean is a harbringer of good fortune for the coming year!
Thank you to Letizia Mattiacci from Alla Madonna del Piatto Bed and Breakfast and Cooking School in Assisi for her kind permission to publish these photos.
About the Author 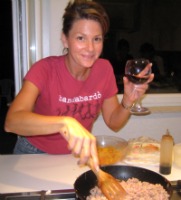 Rebecca Winke – Innkeeper and Blogger
Rebecca moved to Italy from Chicago in 1993 and shortly thereafter opened an agriturismo in her husband’s renovated family farmhouse at the foot of Mount Subasio near Assisi, Umbria.
She spends her time taking care of guests at Brigolante, blogging about the lovely region she now calls home at Rebecca’s Ruminations, and wondering about what strange winds blew an urban vegetarian to a pig farm in Umbria.