Italy Photo of the Week: Soccer “Injury” at San Siro

You’ve only got one week left to enter the Italy Photo Contest, so send in your entries by Monday, March 31!

For this Italy photo of the week, we’re in Milan: 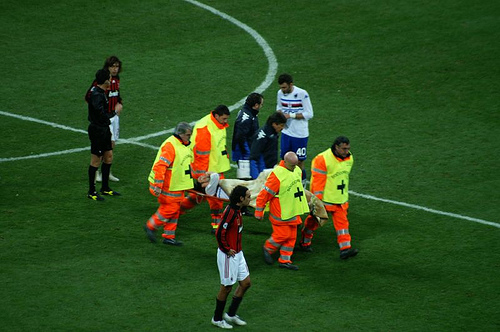 More specifically, we’re in Milan’s mammoth soccer stadium, San Siro for the second of two A.C. Milan games I saw during my stay in the city. Milan didn’t win either game, which was disappointing, but at least my favorite player actually played in the second game. (As a bonus, he’s actually in this photo!) This picture was taken late in the 2nd half, when the opposing team (Sampdoria) was up 2-1 and one of their players got so “injured” he had to be carried off on a stretcher. He actually did get subbed out, so maybe he did have a little owie, but he was up and walking around not long after that, so it seemed more like a time-wasting tactic to me. In either case, I love the melodrama of the men in orange and yellow hustling onto the field with their stretcher and medical bags, running to the rescue of the fallen soldier on the field. Ah, Italian football.

Check out my other Italy photos and the other photos of the week!