Anyone who’s planning a trip to Florence has probably heard the horror stories of people who had to wait 5-6 hours in line to get into the Uffizi Gallery. And when you’ve heard those stories, I’m guessing you had one of two reactions – either you were shocked by the news and immediately did an online search for the words “Uffizi tickets” to buy them in advance, or you scoffed at the foolish tourists who clearly were doing something wrong to wait in such long lines. If you’re in the latter camp, you may think it couldn’t happen to you, but I’m here to tell you you’re wrong.

Travelers who think they’ve found a way around every single queue are in for a shock when they try to make last-minute decisions to see places like the Uffizi in Florence – because almost regardless of the time of year, there are long lines that stretch out the front door. Case in point, here’s Exhibit A – I photographed this line in early March 2008, and this line was not moving. 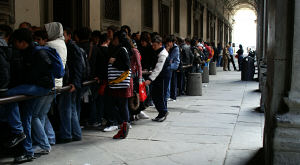 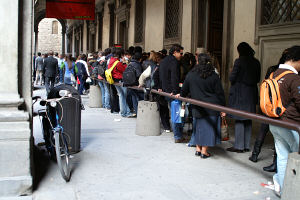 As you can imagine, the Uffizi line is a bajillion times worse in the summer high season. You can book Uffizi tickets in advance, however, and I highly recommend that you do this. Even if you’re not the plan-ahead type, you can call a day or two before you’re in Florence to see what the situation is – you don’t have to book tickets now for a visit that’s four months or more away.

But lest you think that it’s only museums like the Uffizi that are plagued by long lines, let me introduce Exhibit B – the line to get in and climb into the Florence Duomo‘s big dome: 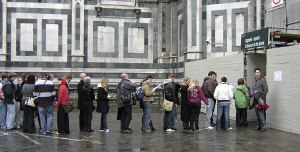 Again, these pictures were taken in early March. What happened to create such a rush to climb the dome? As you might be able to see in the photos, it was raining on and off that day in Florence, and so rather than spend as much time as they might otherwise spend wandering around the outdoors, tourists were desperate for any indoor attractions they could find. Clearly, just getting in to climb the dome meant standing out in the rain, however.

The lesson here is that no matter what time of year it is you should never underestimate the potential for long lines to see the sights you want to see. And unless you’re comfortable traveling all the way to Florence and then leaving without setting your eyes inside the Uffizi or the Accademia, I think that a little advance planning is in the cards for you. And really, even for the most carefree travelers among you, I think nailing down a specific date and time to visit these one of a kind museums is a small price to pay – especially if the alternative is missing out on seeing them altogether.

>> Update: A reader commented about another way to buy last-minute museum tickets in Florence, and I did a little research as well. It’s still not a guarantee that you’ll be able to get into the city’s top museums without a wait, but it’s a great alternative if you’re unable to book tickets in advance.