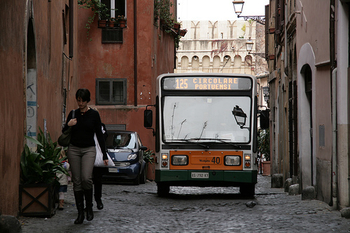 Italy’s vast and growing network of train tracks and the generally low price for train travel means that getting around Italy by train is almost always going to be your best bet. It’s fast and efficient – barring Italy’s sporadic but all-too-regular train strikes – and even most smallish towns seem to have a train station.

There are, however, times when getting around Italy by bus is the better (or only) alternative, even if you’re not straying too far from the beaten path. One of the places where it’s easier and faster to use the bus is Siena – especially if you’re going from Florence to Siena, but almost no matter where you’re traveling from. There are other places in Italy, too, that either don’t have a train station or where bus connections are more plentiful, so planning on a few bus trips isn’t a bad idea when you’re in Italy.

Getting to/from Italy by Bus – From Another Country

Because the European backpacker circuit has long included Italy, there are still cheap ways to get from country to country in Europe – and the train is only one of them. In Italy, trains remain inexpensive enough for most backpackers, but in other countries the price of a train ticket means that the most serious budget travelers choose the bus instead. And for getting between countries, it can be a really economical option.

A couple of routes which may be of interest to you are getting from Paris to Rome and getting from Lyon to Milan.

There are a few companies which run multi-country bus routes, including Eurolines and Busabout. The former offers point-to-point travel between countries, the latter offers organized bus tours of various destinations. Eurolines will get you from one country to another, but although there may be multiple stops in one country it’s not designed for getting you from one region of a country to another. Busabout, while designed as package tours, does call itself a hop on/hop off tour.

Getting Around Italy by Bus – From One Region to Another

Bus travel, like most government functions in Italy, is more regional than national. If you’re traveling between two cities in one region – like two cities in Tuscany, or Lombardy, or Puglia – you’ll be able to find one company (sometimes more) that serves the routes you’re looking for (traveling within one region is discussed in greater detail below). But try to start in one region and travel by bus to another region and things get complicated.

Update: May 2010
When I originally researched and wrote this article, I had had little to no success finding information about bus lines that crossed regional borders in Italy. I thought I was missing something obvious, so I questioned several friends in different parts of Italy and they all said the same thing – basically, you can’t get there from here, at least not by bus. I’ve since recommended taking the train when traveling between regions, and forgetting about the bus.

Then I got a note from a blogging friend, Robbin of Vineyard Adventures, that she had taken a bus – successfully! – from one region to another on a previous visit to Italy. She dug up the website for me, and that website combined with some more digging on my part has resulted in an update to this section.

I still think it’s generally most straightforward and least complex to take a train between regions in Italy, but there are a few bus companies that do cross regional borders, so if you’re traveling in one of these areas and are looking to save money the bus can be a good option. If you know of an inter-regional bus in Italy that I don’t have listed here, please let me know so I can add it to the list.

Again, taking the train may still be your best bet for most journeys (or, if you’re in a group and can split the cost, perhaps even renting a car and driving isn’t a bad idea) – but even if you don’t see the ideal bus route for your trip listed above, it doesn’t hurt to ask at the local tourism office to see if there is perhaps a bus that goes exactly where you want to go.

>> The Orari Autobus website has listings for many bus companies in Italy, including their routes and links, although most of them are regional and not inter-regional.

Getting Around Italy by Bus – Within One Region

As I said, if you’re staying within the boundaries of one region in Italy, you’ll be able to find options for bus travel from place to place. There are a few websites which have links to most of Italy’s regional bus companies listed on them, although keep in mind that not all Italian companies update their websites terribly often – so while some of them will give you a good idea of prices and schedules, some of them may be out of date. Even if you find what you think is current information, it’s a very good idea to check with the station when you get to town – and more than five minutes before you need to take the bus!

To find the bus station in a given city, first check around the train station (assuming there is one). Most cities have their biggest bus station near the main train station for easy transfers. You can also check the main piazza in town, as most cities will have a bus stop in or near it. But if you’re having trouble locating the main bus station, the question you want to ask is, “Where’s the bus stop?” You can say that two ways – either “Dov’è l’autostazione?” (doh|VEH LAO|toh|stah|tzee|oh|neh) or “Dov’è la stazione degli autobus?” (doh|VEH la stah|tzee|OH|neh dehl|yee OW|toh|boos). If all that seems like too much, a lost look and the words “stazione autobus” (stah|tzee|OH|neh OW|toh|boos) with an implied question mark at the end should probably do the trick.

The Bus Station website is my favorite for all the links to Italian bus companies. The list is color-coded so you know which ones are official sites, which have route information, and which ones are set up by “enthusiasts.” (Italian bus enthusiasts? Do they really exist?) There are also notes after each listing to tell you where the bus company is based, to give you an idea of what part of Italy it covers. Note that many of these sites are in Italian only, so recruit an Italian-speaking friend to help you figure them out.

Getting Around Italy by Bus – Within a City 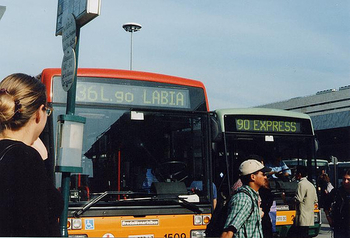 Many cities in Italy have city-wide bus networks, so even if you’re taking the train from city to city you may find that the best public transportation option in each of your destinations is the bus. Some of the city bus websites are listed on that Bus Station site I linked to above (especially the bigger and more touristy places), so be sure to check there.

I’ve also written about public transportation in a couple places where it’s a very good idea to master your options. To learn more, you can read about how to get around Rome, how to get around Venice, and how to use the Metro in Milan.

>> You can read more information about your other options for transportation in Italy, too.