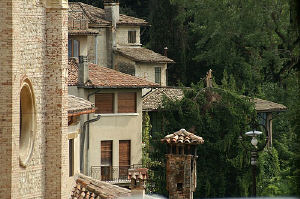 For many people, Venice is only seen as a place to spend a day – arriving early by train or cruise ship, and leaving before dinner to head onto the next city or port. Of course, it’s not a big place, so it’s technically possible to see all the “must-see” sights in that short amount of time. But, as I’ve mentioned half a gajillion times on this site, if you don’t give Venice at least the benefit of one overnight stay, you’ll never fall in love with the city. So, while you’re staying for at least a couple of days, why not make it 3-4 and throw in a day trip from Venice while you’re at it?

Truthfully, using Venice as a home base and taking day trips from the canal city isn’t always the most ideal way to see the area. For one thing, hotels and hostels in Venice tend to be on the expensive side of things, so you’ll likely be paying more for your accommodation than you would in the surrounding area. But the convenience of reducing the number of packing/unpacking routines you have to perform during your vacation may make that worth it to you – I know it’s a big factor for me when I’m planning my trips. Another drawback may be the cost of airfare – that you’re less able to find cheap flights to Venice than you are to a larger airport like Rome or Milan. But if Venice is already on your itinerary, the city’s airport is (in my opinion) one of the best entry points into the country. So if you’re going to pay the extra to fly into Venice, you might as well stay a little longer! And luckily, there are plenty of great day trips from Venice that make staying a couple extra days in this glorious city even more worthwhile.

Did you know you can book discounted shore excursions in Venice without going through the cruise line? And that they’ll guarantee to have you back at the ship in time for depature? Find out more: Discount Shore Excursions from Venice

Here are just a few day trips from Venice you can take: