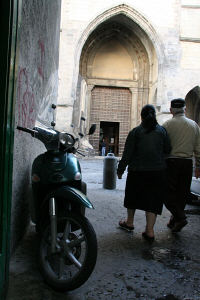 Piazza del Gesú, considered the entrance point to the Greek-Roman city, makes an excellent starting point for a Spaccanapoli tour of Naples. Smack in the middle of the piazza the soaring Immacolata obelisk commissioned in 1743 by the Jesuits is the central focal point. Mary the Immaculate, in gold and copper stands atop the spire keeping an eye on the action below. If she’s lonely up there she only must wait until December 8th when the town’s mayor and cardinal scale the 30-meters to present her with an offering of flowers.

The most imposing structure on the piazza is the intimidating fortress like church of Gesú Nuovo (for which the piazza takes its name). The strange rusticated diamond patterned façade is the result of church construction (1584-1601) by the Jesuits that made use of a preexisting structure, the Palazzo Sanseverino. The strange exterior can be off putting, as it gives no hint to the sumptuous Neapolitan baroque hidden within.

Inside, Neapolitans suffering from physical ailments visit the chapel of Giuseppe Moscati (second to the right). The Christian doctor famous for helping the poor was sainted in 1987 only six years after his death. From the third chapel you can enter into the Sale Moscati (Moscati Rooms) where ex-votos, such as tin legs, arms, breasts, and eyes, are displayed from floor-to-ceiling along with notes of gratitude to the sainted Doctor.

Across the street the Gothic 14th century church of Santa Chiara stands in stark contrast. Built during a period of French royal rule the Angevin dynasty clearly left their mark. One of the most striking features is the altar adorned with four finely carved tombs of Angevin Kings in addition to the inland marble Angevin coat of arms covering the floor. 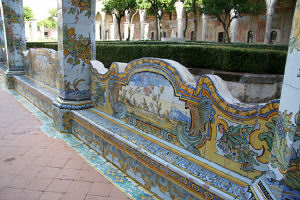 Tucked behind the church is the beautiful majolica-tiled cloister. The tile decorations were added to the courtyard during an 18th century renovation. The benches depict scenes from city and country life while the pillars are colored with vine shoots and wisteria that twist their way up to the capital made of local piperno stone.

The Museo dell’Opera found within the Santa Chiara complex can be accessed from the courtyard. The museum chronicles the sites history with displays of precious liturgical objects and decorative pieces that were originally located within the church. An archeological site is attached to the museum. It is a thermal site dating from the end of the 1st century and is generally regarded as the most complete in Naples.